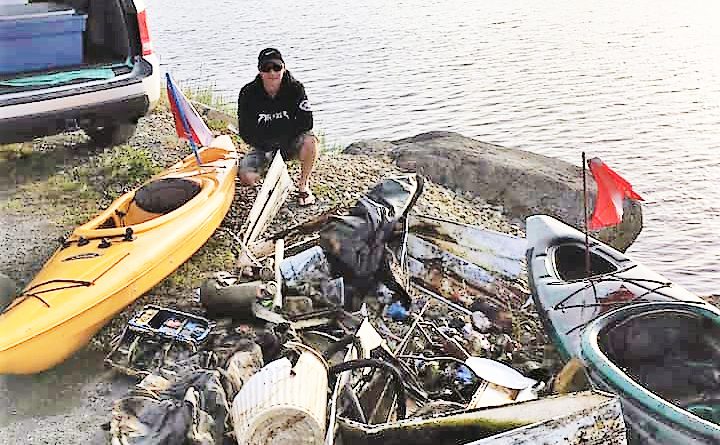 Butler’s Pond in Foxtrap gave a cleanup crew quite a surprise this past week.

Eugene Hynes and Jason Brushett are no strangers to the murky depths of ponds along the Avalon. The two get together regularly throughout the summer to undertake cleanup operations of ponds in the region. In order to do this, they employ their kayaks and diving gear, and come face-to-face with whatever has been tossed into the ponds over the last hundred years.

As Avalon Pond Cleanups, Hynes and Brushett have been making their rounds now for a couple of years, usually diving into a pond after their regular jobs a couple of times each week, depending on Newfoundland’s unpredictable weather.

“Our kayaks are tethered to us, so when we dive down to the bottom, we take pretty much anything we see that doesn’t belong there. We bring it to the surface and load it up into the kayaks,” Hynes explained.

Usually, these excursions take between two and three hours. The duo is sure to recycle anything that can be recycled or re-used, and even get to keep a few treasures they find at the bottom as keepsakes, or souvenirs.

Anything besides that, such as plain old trash, ends up where it belongs which, as Hynes said, is certainly not at the bottom of a pond.

This is the third summer for Hynes to be doing this. He says the idea spawned when he had been swimming and snorkeling with his children.

While swimming, he spotted a few golf balls, bottles, and cans in a lake.

After doing a brief cleanup of that area, Hynes came up with the idea to take his kayak along, and the rest is history.

After cleaning up a few ponds, Brushett – a coworker at Country Ribbon Chicken, as well as a fellow diver and kayaker – teamed up with Hynes to take part in the side project. Now, the two make it a summer routine every year to explore and clean various ponds along the Avalon.

“We try to get to between two and three ponds a week. So, every couple of days we’ll try and hit one up, depending on the weather. For the most part, we need sunny days for it, because you can see the bottom a lot better when the sun shines down through the water,” Brushett said.

Thanks to the colder, longer spring this year, Hynes and Brushett were a little later starting up than they had anticipated. Last year, they carried out 18 pond cleanups. This number came from tackling 15 different ponds, after revisiting a couple of ponds to give them some extra, much-needed attention. As of Thursday, August 8, Hynes and Brushett had cleaned up nine ponds, and are anticipating to finish this summer with around 17 or 18 cleanups before calling it quits for another year.

While speaking with The Shoreline, the pair had just finished a dive into Butler’s Pond, in Conception Bay South. It turned out to be dirtier than expected.

“A lot of garbage like cans and whatnot. There was also a lot of vinyl siding,” Hynes added, noting that the siding likely came from a time when that siding was popular, and would blow off houses and eventually end up in the water. He noted the siding was buried so deep beneath the mud it was almost impossible to see, save for a few corners sticking up out of the floor of the pond. “That kind of stuff stays there for decades.”

“I’ll say, about 65-70 per cent of what we just pulled out of Butler’s Pond was garbage. That’s the most garbage we’ve ever taken out of a pond, compared to what’s recyclable and we can re-use,” Hynes went on. “There were a few cans of course but, for the most part, it was all garbage.”

Hynes said he average pond they clean has about 80 per cent recyclables sitting on the bottom. Butler’s Pond was nearly the complete opposite.

This was the first time the two had visited Butler’s Pond, which is located between Battens Road and Lodge Road in Foxtrap. They decided to take a trip to this area after being contacted by a concerned CBS citizen.

Just a week prior, Hynes and Brushett took to Lawrence Pond in Upper Gullies. They said this particular pond was host to more recyclables than garbage.

That was actually the second time they had visited Lawrence Pond. Hynes said the first time they visited the pond, they found a cell phone, as well as a camera. They even managed to pull a red dog’s leash from the bottom, which they were able to return to the owner thanks to the help of their Facebook page.

Despite how much garbage they hauled up from Butler’s Pond, both Hynes and Brushett agreed that Conception Bay South as a whole is no worse or better than any of the other communities they visit along the Avalon, and that they were simply happy to be able to do their part to ensure these ponds are still usable in years to come.

In fact, Hynes was happy to report that their efforts have actually inspired others to take on similar projects.

“We get pictures sent to us from people who do their own little cleanups at their cabins and whatnot. Their kids are even bugging their parents, wanting to go out and do their own cleanup like ‘the two guys they see on Avalon Pond Cleanups.’ So, hopefully we’re making a difference with this,” he said.