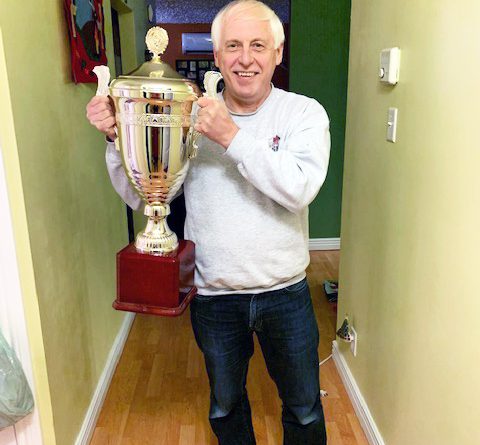 This year’s Winterfest marked the first year for one tournament.

On Monday, February 17, the Conception Bay South Recreation Complex was host to the Canadian Inclusive Squash Challenge – the first of its kind in the country.

The tournament is a product of the Canadian Inclusive Squash Program, which planted its roots in Conception Bay South in January of 2019. The program aims to introduce the sport of squash to mentally, emotionally, and physically challenged athletes ranging from eight to 25 years old.

Within the year since its inception, the program has brought together 12 athletes living with various developmental conditions such as cerebral palsy, autism, down syndrome, among others. This has done little to stop the athletes from taking part in, and enjoying, the game of squash.

Although the program has only been in operation for a little over a year, founder and head coach Eric Hart says that when he was approached about setting up a tournament for the athletes during Winterfest, it felt like too good of an opportunity to pass up.

This was not something out of Hart’s comfort zone, as he has helped run a junior squash program for 20-years that hosted a tournament during Winterfest as well.

Hart admitted though that a part of him felt as though it was too soon to hold such a tournament, noting that with only one session a week, the program’s athletes did not have enough of a chance to properly prepare for tournament style gameplay. Ideally, he said it would take about two, possibly three years for that kind of training with the relatively small time frame they have to play and practice together.

“But, I just said … why not? Everyone else is doing it, why can’t I give them the opportunity too? It felt like the right thing to do,” Hart said.

Hart added that one of the biggest things he and the rest of the other directors involved had to keep in mind was that the athletes were not accustomed to competitive games, and are not used to being rushed between games.

“I really can’t tell who is going to be really competitive, or even how long a game might take. I just don’t have that level of experience with (the athletes) yet,” Hart said.

Although there were plenty of end-game prizes to go around, including goggles and rackets, there was one big reward for the squash player who came out on top. That came in the form of a large gold trophy, named after someone who not only left a mark on the residents of Conception Bay South, but also holds a special place in Hart’s heart – his mother, Hazel Maud Hart.

Hart said that the discussion over whose name would be applied to the trophy was a lengthy one, and that the program’s board of directors wanted to make sure the trophy was named in memory of someone who played a major role in the lives of disabled people in Newfoundland’s history.

He explained that his mother, who led an eventful life as a medical professional in places such as Vermont, England, and of course Newfoundland and Labrador, was one of the first people to come to his mind. At first, he was hesitant to bring her up given the fact that she was his mother, but after some discussions with fellow program directors Lolly Gillen and Susan Legge, the decision was made to name it the Hazel Maud Hart trophy.

In 1965, Hart’s mother retired from her position as head nurse of the case room at the Grace Hospital. Following that, Hazel welcomed 16 developmentally challenged children into her home, taking care of them for approximately 10-years. This came after raising six of her own children, including Eric.

“They had autism, down syndrome, and some were bedridden. She would just do this night and day – it was a seven days a week thing,” Hart said. “Mom had osteoporosis as well. One day, when she had to lift a bedridden patient, she broke her back … That’s when she had to give up the children because she had to go get an operation done and have her back fused. When she got out, she re-certified as a nurse, got her driver’s license, and started doing private duty for people who needed a nurse overnight, or things like that.”
Hart remembered fondly a specific young boy who his mother took in, who was told by doctors that he would never be able to walk. After trying over and over to get up on his feet to walk properly, Hart said the boy eventually learned to run, but was never able to slow his pace to a walk. Still, that success came with the resilient aid of the Hart family.

“It’s because of mom’s involvement, taking children in and helping them that we ultimately decided to name the trophy after her,” Hart said.