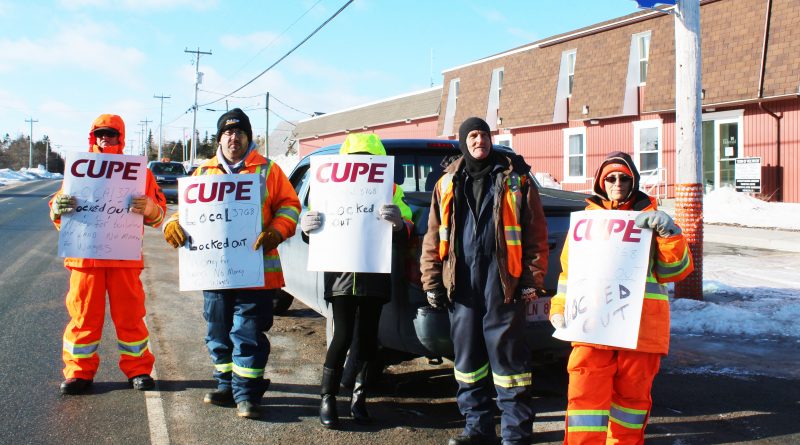 Holyrood workers back on the job after accepting 6.5 per cent raise over three years

Municipal employees in Holyrood are officially back to work, as of February 12.

The workers were locked out by the Town of Holyrood on February 3.

The 15 members of the Canadian Union of Public Employees (CUPE) Local 3768 had been in negotiations with the Town since last fall looking for an increase in wages over a three-year period. Things took a turn for the worse when they rejected a Town offer of a 5.5 per cent increase over three years. They had asked for 17 per cent, which would put their wages on par with those of municipal workers in neighbouring Conception Bay South.

The workers’ rejection of the offer was followed by a strike vote, which passed with 85 per cent. The next morning, the Town locked them out.

The stalemate lifted on the evening of February 12 when the two parties re-entered negotiations that eventually brought the dispute to a conclusion.

The Town’s offer that evening was for a 6.5 per cent increase over a three-year period; one per cent more than the offer that was refused previously.

The next day, unionized workers took another vote, and ultimately accepted the offer.

“It was unfortunate that this labour dispute had to occur, but respectfully, we had no choice but to agree to disagree over the wage gap,” said Mayor Gary Goobie. “Thankfully, that’s behind us now and we will move forward with the day-to-day operations of the town.”

Goobie thanked both bargaining teams for successfully resolving the issue that saw many of the town’s residents concerned over the future of town operations while the lock out was taking place.

“Basically, to sum it up, we’re glad it is over,” Goobie said.

The initial 17 per cent increase proposed by CUPE would have cost the town an additional $150,000 to $160,000 a year, something that Goobie said was simply not within the town’s budget. To grant such a raise, residents would have had to see spending on fire services or recreation take a big hit. The only other option would have been a raise in municipal taxes, he added.

Goobie said one mil equates to approximately $50,000 in revenue. So, a 17 per cent increase in wages would see an increase of three mils to residents.

“There’s no question, the residents of Holyrood would not accept that, and we had to recognize that during these negotiations, so there’s a lot of things that had to be considered here,” Goobie said. “We had to take a fair and balanced approach when dealing with that, and thankfully we were able to reach a happy medium.”

The 6.5 per cent agreement see a 24 cents per hour raise in the first year. In year two, it goes to 72 cents more, and in the third year, 60 cents per hour more.

The 15 employees got back to work on Friday morning, February 14.

In the absence of town workers while the lock out was in place, the Town hired outside companies to handle day-to-day operations, such as clearing snow from roads. Goobie said that as of Friday morning, the town was still in the process of crunching numbers, however he was under the impression that council had not spent or saved much more money in the process, and that things were on par when it came to the town’s finances following the dispute.

“Everything will work out okay, financially. There was a saving on one side, from the salaries, but then there is a cost involved with the service,” the mayor said. “I was given every assurance by the CAO (Chief Administrative Officer) that everything is okay financially on that end.”

The town’s Crystal Carnival was also affected by the dispute in that many events were postponed. The new dates for the winter festival is February 26 to March 1.