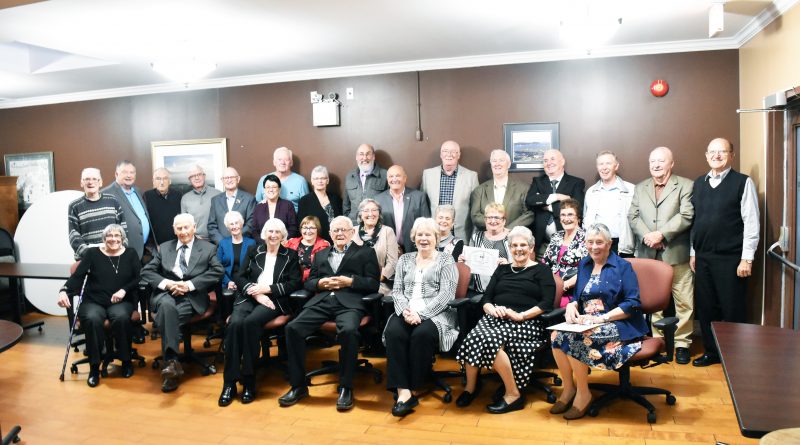 They were friendly, and familiar, but there was no missing the gray hairs and creases etched in the faces of the founding members of the Holy Spirit Minor Hockey Association, who gathered last week to celebrate their induction last year into the CBS Sports Hall of Fame.

For some, it was their first time seeing each other in decades. But the memories of laughter filled nights and early mornings tying laces, wiping snotty noses, and even shovelling snow off the ice at St. Bon’s Forum between games were as vivid as the days they lived them in the early 1970s.

The effort to get the group inducted was lead by a self-appointed committee of the volunteers’ former players, including Randy Neville, Tom Bursey, Dale Bickford and Dave ‘Sarge’ Tilley, who all learned their hockey skills, and formed lifelong memories, under the tutelage of Duff and his cohorts at St. Bon’s Forum and Prince of Wales Arena in the years before CBS got its own rink. The appreciation dinner at the Royal Newfoundland Yacht Club last week was a follow up to that.

The evening included a moment of silence for those founders who have passed away over the years, the singing of Oh Canada by Samantha Bickford — to keep with the tradition of starting all hockey games with the national anthem, the cutting of ceremonial cakes, and a short speech by Glad Duff, the Holy Spirit vice-principal who started it all, gathering around him by some combination of personal magnetism, exhortation and good, clean fun, the many others who stepped up, some occasionally, others without fail, to give the children of the school, and along the shore, an organized hockey program.

“From the players who played in Holy Spirit Minor Hockey, and the students, we want to say thank you, and have this dinner of appreciation for what you did for minor hockey in Conception Bay South,” said emcee Paul Connors, who like his brothers and sisters and his parents Stan and Evelyn, were knee deep in the development of the association from the get go.

On one wall of the club, dozens of pictures of former teams from the early 1970s were taped up for the founders and their families to view and reminisce over. A slide show featuring pictures of each of the founders and highlights of the early years played on a screen as Connors ran through a history of the organization.

It all began, Connors noted, when the new principal of Holy Spirit, Alice Connolly, recruited her friend and fellow educator, Duff, to become vice principal. But Connolly had a second motive. She also wanted someone with the energy, know how and grit to start a minor hockey program.

There had been a hockey program on the shore earlier in the 1960s run by Wilson Butler and other volunteers, which actually began on the bogs and barasways of Long Pond, Foxtrap and Upper Gullies, growing to include a lighted, outdoor rink on All Saints Road and even trips to provincial tournaments. Many of the players who came up through that system helped form the nucleus of the fiercely competitive CBS Senior Hockey League. But by the late 1960s and early 1970s, while the senior league continued on, the minor system was melting away.

It was around this time that Connolly arrived at Holy Spirit. Despite being busy as an educator, father and operator of a dairy farm, Duff said yes to Connolly’s request.

He began by hiring buses, bartering for ice time at St. Bon’s, which as one of the few rinks on the Avalon was in great demand from teams all over the peninsula, and gathering a group of coaches, drivers, managers and sundry other helpers that included moms as well as dads, such as his own wife Pat.

By the fall of 1972, all that work led to the group being recognized as an official affiliate of provincial minor hockey. Duff had given it a structure, with an executive in place, duties assigned and meticulous minutes being kept, often by Duff himself, who still has the notebooks to this day.

Prominent among those who helped Duff get the association established were Gerry Kelly, Stan Connors, Diane and Al Kearley, Ed and Beth Kieley, Stan Barbable, Art Tilley, George Baggs and Ed Mahoney, among a good many others. Wayne Mercer, a teacher at Holy Spirit, organized a referees group to complement the association, and like the hockey club, it grew into one of the biggest and most respected groups of its kind in the province.

“They are rock stars,” said Connors. “Hockey had arrived at Holy Spirit School.”

The Friday night program at the Forum catered to Atom and peewee players. The Sunday morning program at Prince of Wales hosted the bantams. Though it was a Holy Spirit School initiative, Duff threw the rink doors open to any child from CBS who wanted a game.

“There were budget limitations of course,” said Connors. “Mr. Duff only charged a dollar (per week) for people to play hockey. That included the bus ride out and the ice time. And for every fellow who played hockey, the bus ride out was probably part of the big entertainment for the week. Hockey was secondary sometimes.”

The best fundraisers were the adult dances at Powers Court Hall. “She would be jam packed,” said Connors. “There were bar sales, of course, and they made a lot of money. Both Mom and Dad were involved in this of course, and I never ever heard them complain about having to go to those dances. There was great attendance and a lot of fun was had at those dances.”

In 1972, Holy Spirit sent its first team to an all Newfoundland tournament, representing CBS. By the 1974-75 season, the association was able to ice a bantam team strong enough to capture its first provincial championship.

It was around this time too that the association, thanks to help from other volunteers in the town, was able to gather enough funding to build the rink at Kelligrews. It opened in 1976. A highlight of that effort was a walkathon from Soper’s Store in Paradise to the site of the rink. With the new arena in place, the Conception Bay South Regional Minor Hockey Association was formed, building on the foundation laid by Duff and his crew, many of whom became stalwarts of the new organization.

“As a result of the organizers in this room, CBR Minor Hockey grew to become the largest minor association in the province,” Connors said, pointing out the Holy Spirit system was also the precursor of the Paradise Minor Hockey Association, which formed out of CBR a few years ago. “And it’s all thanks to the people in this room.”

As for Duff, he was typically humble when called to say a few words. He tried to make light of his contribution with a joke.

“Alice commandeered me because she said she wanted someone who could get the boys interested in something else besides girls,” said Duff. “I was happy at Holy Cross, but Alice made a good case, and it was like coming home. And I’ve never regretted a day of it.”

Duff admitted that seeing so many familiar faces, some he hadn’t seen in ages, made it difficult to know where to start. They are people he looked upon as family, he said.

“We had a lot of fun,” Duff said. “The organizing of minor hockey – I never even thought of it as that… For me, it’s just a matter of saying thank you to so many really, really good people who made life so enjoyable for such a long period of time. You can’t realize how much fun I had. People said, ‘How did you do it?’ It was easy. You got up in the morning and you kept going until you went to sleep. It was as simple as that and it was so much fun, because you were dealing with really, really good people and really, really good youngsters, children who would do anything for a game of hockey and who were very respectful.”

On behalf of everyone in the group, Duff thanked the organizers for all the research and homework that led to their induction into the Hall of Fame, and for the effort that went into organizing the appreciation dinner. “I don’t know what I can say that shows how much I appreciate it, or how much my wife appreciates it,” Duff said. “I never give her half enough credit. I couldn’t have done anything without her. It was simple as that. So thank you… you’re just a wonderful bunch. God bless you.”