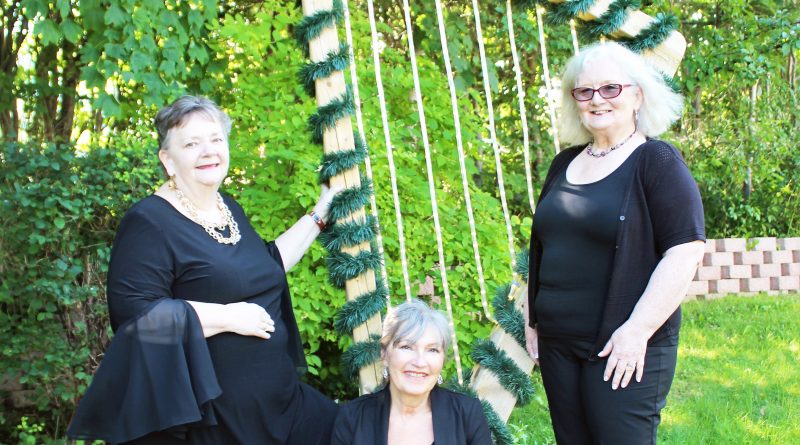 Vicki Greenslade has the kind of goal you don’t hear everyday – she wants to make CBS the harp playing capital of Newfoundland and Labrador and possibly even all of Atlantic Canada.

The Long Pond musician and other members of CBS Harps are dedicated to widening the usage and knowledge of folk harps across the province.

In fact, group member Vicki Greenslade says she even hopes to make CBS the harp capital of Newfoundland and Labrador and, with enough dedication, even make Newfoundland the go-to destination for harpists in Atlantic Canada.

The group has been active for approximately four years.

“Why is it that here in Newfoundland, such a musical province, you never, ever, see a harp in anyone’s house?” Greenslade said, is a question she would often ask herself.

After some digging, Greenslade discovered there was simply a lack of the instruments in the province. While instruments such as the accordion and the fiddle were present in abundance, it seemed few people were nterested in playing, or even owning, a harp.

“So, that’s how all of this got started,” Greenslade said of the beginnings of CBS Harps.

To increase local interest, Greenslade offered what she calls a ‘harp tasting course.’ The 10-week program gives musicians a chance to learn the basics.

One of the biggest attractions of the course, said fellow club member Jacqueline Cook, was that participants were able to take a harp home with them to practice with during the duration of the course.

As a music teacher, Cook explained that she too had an interest in learning how to play the harp, but was deterred by the fact that most harp lessons required students to already own the instrument, which can cost a pretty penny, even for a relatively basic, beginner’s model.

“Now, I practice every day, it’s something I do religiously,” said Cook. “It’s opened up a whole new world for me … I’ve met plenty of new friends, I’m involved in a number of things now, and it’s really just a wonderful instrument.”

Greenslade said of the approximately 40 people who have taken the harp tasting course, around 20 went on to buy their own harps, ultimately leading to an increase in the number of harps in the province.

In fact, Greenslade said, Bob Davis of Long & McQuade recently commented on the number of inquiries the music store has received lately about harps. The store is looking stocking harps, thanks to the influence of CBS Harps, Greenslade said.

“It’s growing by leaps and bounds … it’s tremendous,” she said. “It’s amazing to see what we’ve been able to do, and what we’ve done.”

And, as another club member, Alexa Laurie, pointed out, the harp can offer much more than just harmonious sounds for ambitious musicians.

Laurie is a physician who has been playing the harp for around 10 years.

She is currently taking a course that teaches how to play the harp for therapeutic reasons. When she completes it, Laurie will be able to play for patients in palliative care, or in the ICU.

“There’s a lot of evidence that harp playing, due to the vibrations, helps people and makes them feel a lot better, subjectively,” Laurie explained.

“Objectively, it lowers blood pressure and pulse, and elicits a response of relaxation. Of the playing that I’ve done already, I’ve found the response to be so positive. People really do feel better afterwards, and patients’ families are grateful. They, too, feel better after seeing their family members feeling better. So, I think it’s something that would be very good to continue and try and make something out of.”

“I feel that the knowledge that I have, and the ability that I’ll have when I have this certificate, will be a big asset to CBS Harps,” she said.

The members of CBS Harps are preparing for their fifth concert coming up on Friday, Sept. 6 at St. Peter’s Anglican Church in Upper Gullies. It will feature Sharlene Wallace, who Greenslade described as ‘the Canadian harpist extraordinaire.’

CBS Harps will serve as the opening act for Wallace, performing three songs. The three harpists agreed that it will be an exciting opportunity, not only for them, but for the supporters the group has managed to attract over the years, who will be able to see and hear first-hand just how much progress CBS Harps has been able to make.

“We have been so blessed to have the calibre of people come to us that we have … every one of them have gone that extra step for us,” Greenslade said.