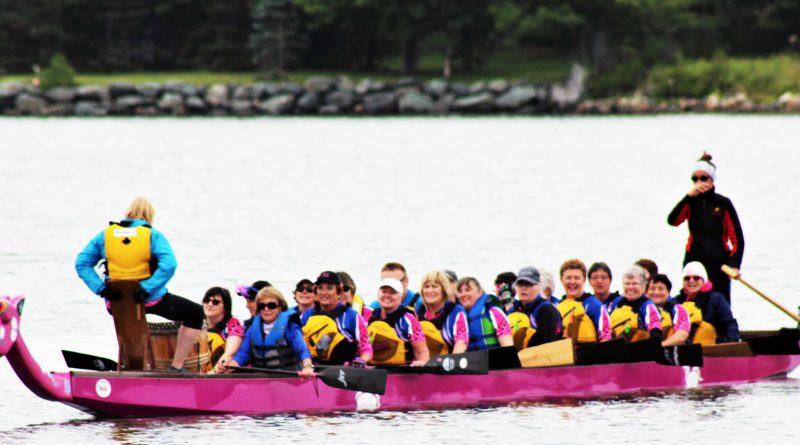 Octagon Pond’s waters were filled with dragons this past weekend.

On Saturday, the Town of Paradise hosted the annual Dragon Boat races as part of its SunSplash summer festival.

The event has been ongoing since 2010. It’s become a staple of the SunSplash – Paddle in Paradise festivities, and since the Avalon Dragons – a group of dragon boat enthusiasts with a focus on raising awareness and funds for breast cancer treatment and research – got involved, the sport has become quite a popular one here.

She explained that before the Avalon Dragons formed, Newfoundland was, alongside PEI, one of the only provinces in Canada to not have its own dragon boat team. Now there are teams as far as central Newfoundland, and Clarenville.

The Avalon Dragon also support other community-based teams such as the Rock Island Dragons, the Dragonelles, and Breath of Fire – teams that were present at the festival this past Saturday. The Rock Island Dragons have gone taken part in national and international competitions.

The long, colourful wooden boats, topped with a wooden dragon head carving, have crews of 20 people aboard. This includes a drummer, whose job it is to ensure everyone is paddling in syncopation.

The Paradise race features a 250-metre course, which takes most teams between one and two minutes to complete.

“We provide instructions (to participants) in the weeks leading up to the festival. We let them practice out on the water and show them how it’s done, and it’s totally fun,” Mannion said, noting the Avalon Dragons serve as something of mentors to many people looking to get involved in the team sport.

Paddle in Paradise is usually the biggest fundraiser of the year for the Avalon Dragons. There is a registration rate of $200 for each team. The teams are also asked to do individual fundraising, looking for approximately $100 per person.

The funds help maintain six dragon boats, alongside insurance costs, Mannion said the fundraising can be essential to ensuring there are more festivities in the years to come.

“But we also give back to the community,” she said. “We support Daffodil Place, Living Rooms, and we supply monies and supplies for those dealing with breast cancer. The monies we provide help them buy breast prosthesis, bras, and other things that you need when you’re going through breast cancer treatments, and shortly thereafter.”

It’s a cause that hits close to home for the Avalon Dragons, as each member has either lived through, or is currently living with, breast cancer.
“We’ve all been in the same boat, and we’re in the same boat now,” Mannion said.

She explained that a common outcome of certain breast cancer treatments, specifically auxiliary dissections where the lymph nodes are removed, is swelling in the arm. She says those dealing with this are told to not move the arm as much as possible, and to avoid lifting virtually anything.

However, more recently, that advice was contested by Dr. Don McKenzie (also known as Mr. Dragon Boat) due to a lack of evidence to support it.

McKenzie advocated dragon boating as a means of providing beneficial activity for survivors of breast cancer, noting the strenuous upper body movements involved in rowing help reduce the swelling, and aid in decreasing the start of lymphedema.

Now, some years later, dragon boating has become something of a national movement supported by the International Breast Cancer Paddlers’ Commission.

“We have international conferences every four years … We went to one about eight years ago and it was amazing, with teams from all over the world,” said Mannion. “Every single one of them had a breast cancer diagnosis, and it was like a sea of pink. So, those kinds of experiences are amazing, and really help with the social wellbeing of people dealing with breast cancer.”
chris@theshoreline.ca