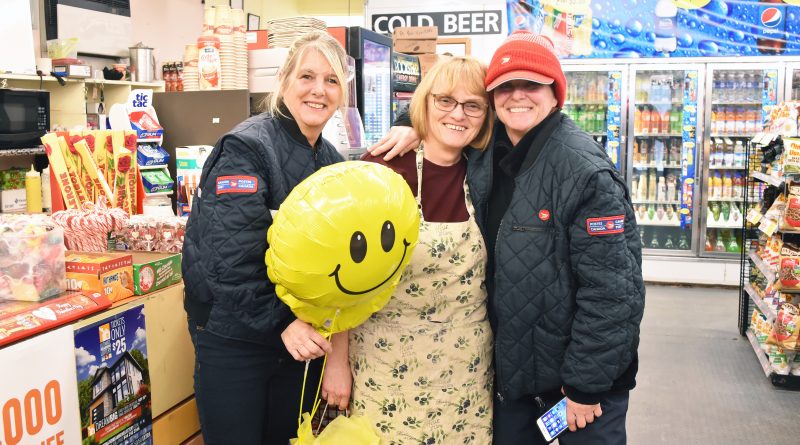 You can’t fault Connie Pittman for thinking she may just have the best postal carrier in all of Canada.

On Monday, that carrier, Helen Tucker of the Paradise Canada Post station, surprised Pittman at work with balloons, and more importantly, a return trip airline ticket to Edmonton so that the clerk at Hamilton’s Grocery on the St. Thomas Line can fly to Alberta to visit her three grandchildren.

“One of them had open heart surgery and she hasn’t seen him in four years,” said Tucker, who used her own travel points and paid the necessary taxes and handling fees for Pittman to take advantage of them.

Ryder Pittman, the lad who had the heart surgery, is now eight, said grandma. “He’s doing excellent,” she added. “And he has a twin brother and his name is Cruz. The other boy is Liam.”
Ryder was born with a hole in his heart, Pittman explained, but he was six months old before it was discovered.

Tucker twigged to Pittman’s need for a trip west after she delivered a letter to her at the store containing a picture. “She said, ‘Hang on Helen, I want to show you something,’ and when she took it out, here was the three little boys,” said Tucker. “So, I said to her, ‘Why don’t you go up and visit them?’ I knew she was a widow and she said, ‘Boy, I can’t really afford it right now.’”

So, Tucker resolved to do whatever she could to help Pittman get there. When West Jet Airlines found out what Tucker was doing, the company agreed to let Pittman’s luggage accompany her at no charge.

While she was setting all that up, Tucker avoided visiting Pittman. Tucker’s sister Rhonda Martin, who is also a postal carrier, happens to be the new carrier on the route.

“The last couple of times I came in, she was like, ‘I haven’t seen Helen’,” Martin said. “I didn’t know what to tell her.”

“I was trying to avoid her,” admitted Tucker, who didn’t want to spoil the surprise.

Pittman will fly to Edmonton on May 28 for 11 days. Her husband Gary passed away over three years ago. The family moved to Paradise about 14 years ago.

Pittman admitted she was surprised to see Tucker walking into the store carrying balloons and an airline ticket. “I thought it was so precious,” Pittman said. “It is sweet, really sweet.”