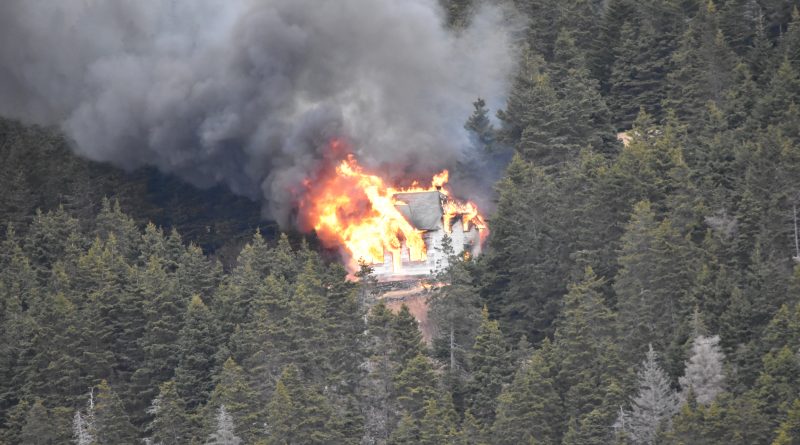 Not that they didn’t already know it, but the fire that consumed an abandoned house in Avondale last week well illustrated for local residents the value of the longstanding mutual aid agreement between the various fire departments in the area.

The RCMP and Avondale Volunteer Fire Department got the call about the fire off Goat Shore Road about 5:30 p.m. last Wednesday. By that time, the two-storey structure was engulfed in flames and billowing massive plumes of black and dark grey smoke into the air.

The house had reportedly been a hangout for young people and there was even a pile of firewood stacked under the porch, according to one resident in the area who was familiar with the structure.
Because the building was located down a steep dirt track off Goat Shore Road, the Avondale Fire Department, assisted by crews from the volunteer brigades in Harbour Main and Colliers, had their hands full getting equipment close to it. About a third of Avondale’s 30-person fire department were able to respond to the call.

“I was just on my way home from work and coming down the Avondale Access Road and I could see the flames,” said Avondale Fire Chief Gordon Hawco. “We had some fellows who were already after getting home from work, so it wasn’t bad (in terms of a response).”

By the time the firefighters arrived on scene the fire was after spreading a bit into some of the trees and the grass around the house, said Hawco.

Hawco said that kind of relay hasn’t happened often in the past, “but we’re after doing it before,” he noted. “And we’re all under a Mutual Aid Agreement, so if there’s a fire in any of the communities and they need help we all kick in. It’s a Mutual Aid Agreement from Colliers to Holyrood.”

Hawco said he doesn’t know if kids had been hanging around the house that afternoon. “But I know for a fact, because I’ve walked down that trail a bit, for 10 years or more the windows and everything have been gone out. And there was no electricity hooked up to it, so it’s suspicious in nature. Thankfully it happened at this time of year, because if if had been in another month or so when things are drying out we could have had another Chapel’s Cove. The old grass and weeds from across the road from it were after catching.”

It’s the first suspicious fire in Avondale since several years ago when a spate of suspicious fires occurred over the period of a year or two, sparking fears that an arsonist was at work.

“I know the number of calls have been increasing over the years, but that’s not just for fires, that’s for medical assistance and we cover accidents on parts of the TransCanada Highway too,” Hawco said, observing the suspicious fires from several years ago appear to have stopped.

Meanwhile, Hawco said the cooperation between the community fire departments is noteworthy and his department was grateful for the help from their neighbours in Colliers and Harbour Main.
The RCMP is asking that anyone with information about the fire call the detachment at 229-3892, or anonymously at 1-800-222-8477.

Staff Sgt. Richard Marshall indicated the matter is under active investigation. “And we do have some leads that we are following up on,” he added. “There is some significant information that we have to track down, which is good. Oftentimes with these incidents there’s not a lot to go on. At this point, we’re not in that position, which is a good thing.”

While Staff Sgt. Marshall is new to the detachment, he said he is familiar with the history of the earlier suspicious fires in Avondale. “I can tell you that there is no information at this time that’s come to light to suggst that the two are linked in any way, shape or form,” he said.