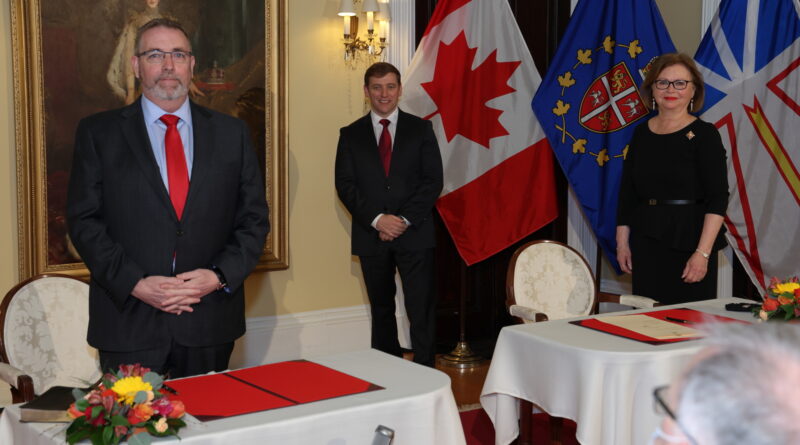 Carbonear-Trinity-Bay de Verde MHA Steve Crocker is hopeful that 2022 is the year the province moves from pandemic to endemic.

“I think Dr. (Janice) Fitzgerald herself has said that this is likely heading into an endemic,” said Crocker, who is also the provincial Minister of Tourism. “COVID is likely here to stay, and it will choose a path, and we’ll have to learn to just live with it. And I think we’ve done well as a province. You think about the fact that we have a 95 percent vaccination rate, the highest in Canada, and I think that’s why we’re seeing success right now. Any hospitalization is too much hospitalization, but our hospitalization numbers are, per capita, lower than anywhere else in the country.”

While Crocker says he understands folks’ frustration with the pandemic restrictions, now two years on from the original onset of COVID-19, there is reason for optimism, and the province is certainly not back to square one.

“It feels like that,” allowed Crocker. “It feels like that. It feels like Groundhog Day, March 2020, but this is not March 2020. We’re 95 percent plus vaccinated, and I’m not a scientist or a doctor, but the disease itself seems to be softening. Here in the province, and again I’m not a doctor, but we’re a few weeks behind everyone else. When Ontario peaks, our peak is just a little time past that. So, I think we’re headed into what should be the new normal. Dr. Fitzgerald has said herself that COVID is something that we can no longer fortify ourselves against. We’re all, I think, going to get COVID. We just have to protect ourselves against it and make sure we have the capacity to withstand it. But the idea that we can fortify ourselves against COVID I think, if you look around the world and around the country, is not one that’s possible, and its something that we’re going to have to learn to live with.”

Industries, particularly tourism and recreation, depend on restrictions being loosened to survive.

Those industries are of particular concern to Crocker, who was appointed Minister of Tourism, Culture, Arts and Recreation in April 2021.

“It’s a very exciting portfolio,” said Crocker. “It’s my fourth, and this one brings unique challenges. When you think about COVID, the industries that I work with have been most drastically impacted by COVID, directly. And if you think about our district – tourism, arts, hospitality, and recreation are very big components of the community.”

One of his tasks is to oversee Come Home 2022, a $4 million tourism initiative aimed largely at Newfoundlanders and Labradorians living away.

The Liberal MHA hopes the celebrations give the industry a much-needed shot in the arm.

“I’m very much looking forward to executing that program this year as we try and revitalize the sector,” said Crocker. “Make no mistake, there will be no full recovery in the Canadian, Newfoundland, or the world economy, until this sector recovers. So, we will not see a full recovery until the tourism, hospitality, and arts sector recovers. So, it’s very important that we continue to be there with supports for the industry, and continue to make sure that we come out of this stronger than ever.”

While Crocker admits that industry analysts believe a full sector recovery to be another 18 to 20 months away, he’s optimist the tourism, recreation, and arts sector will see a rebound this summer.

“When you think about tourism, we have a tremendous opportunity,” said Crocker. “Ovbiously, 2020 was a tourism disaster. But we did see a rebound in 2021. The third quarter of 2021, when you think about the hospitality sector and take a piece out, and I don’t want to cherry pick and make it sound like everything is hunky dory, but our restaurant industry in the third quarter of 2021 actually rebounded somewhere near 2019 numbers. So, we’ve seen that there’s a pent-up demand. Ovbiously, Omicron set us back, but I think we’re headed towards a reasonable recovery in 2022, but there’s still going to be work to do.”

He added the province, with its wide-open spaces, barren landscapes, and bevy of outdoor activities, will likely prove attractive to post-pandemic travellers.

“We’re a bucket list destination, and we need to heighten awareness of that to people throughout this country, and North America and around the world,” said Crocker.

As to what Come Home Year celebrations will look like, Crocker said many of the activities will be community-based.

“I think you’ll see a lot of community activity,” said Crocker. “I know the Department of Provincial and Municipal Affairs had a Come Home Year program and they’ve received over 200 applications for funding from communities across the province. And we have a number of programs running in my department for Come Home Year. For the Cultural Economic program we’ve allocated an additional $3.5 million dollars. We’re seeing applications from all over the province. I’m encouraging towns in my district to get involved and get those applications in, because we’ll have an opportunity with Come Home Year to amplify some of our events that we would normally see around our district and around the province. This is a way for communities to augment their events and attract our friends and relatives’ home, attract new people to Newfoundland and Labrador. I think you’re going to see a big focus on our cultural and arts industries.”

Apart from the Come Home Year campaign, the province is hosting a non-resident tourist campaign, ‘Leave No Song Unsung.’

“This is a bucket list destination, and people have had time to reflect on what they want to do coming out of COVID, so we want to make sure we’re front and centre in people’s minds,” said Crocker.

While the summer tourist season is still a ways’ off, one issue that does seem to be front and centre in many constituents’ minds is the question of staffing at Carbonear General Hospital, something that has been ongoing for several years.

“It’s not isolated to Carbonear Hospital, or the hospital in Old Perlican, or the Hospital in Whitbourne, or the Health Sciences Centre,” said Crocker. “It’s a provincial, national, and global challenge in a lot of ways. And it’s by far the number one issue. And as someone who lives in the district, and who plans on, hopefully, living in the district for a long time, it’s challenging. Its challenging for myself. Right now, in my own family, there are four of us, and the only one right now with a family doctor is my wife, and her family doctor is retiring in March, so we’ll become a family of four with no family physician.”

Crocker pointed out that the province has opened a new provincial recruitment office, and that the release of the Health Accord in the near future should provide some guidance moving forward.

“Our medical system here in the province is based on the 1960’s, and we haven’t really done a full refresh since the 1960’s,” said Crocker. “And I think this is what you’ll see coming out of the Health Accord, is a glimpse of what some of our options are.”

He said that while it’s the province’s job to create a pool of doctors, it is the responsibility of regions and communities to attract those doctors.

“And I’ve seen some pretty inventive things from towns around the province,” said Crocker. ‘A lot of towns are actually packaging themselves and going out and selling themselves. It’s about selling ourselves, and when I say ourselves, I mean our region, to prospective health care professionals.”

He said one area to look at is modernizing the health care field, including the use of virtual or phone appointments, as has become common during the pandemic.

“Throughout COVID, on two occasions, I had to avail of 811 for some care, and I did it virtually,” said Crocker. “Now, that being said, there is a lot of stuff that can’t be done virtually.”

He added that health care is everyone’s responsibility, as it affects everyone.

For Crocker, the year 2021 started off on a high note.

“If you think back to the beginning of 2021, we did go into an election, and that was affected by the pandemic, as has pretty much everything in the last, almost two years now, but one of the highlights that came out of that was that I was very fortunate that the people of Carbonear- Trinity-Bay de Verde gave me one of my largest victories to date,” said Crocker.

As the Liberal candidate, Crocker, who first came to office in a by-election in November 2014, and has held the riding ever since, earned almost 68 percent of the vote last year, handily defeating three other candidates.

“So, I was very pleased to see that vote of confidence from the constituents in the district. And with that comes the responsibility to work hard on their behalf,” said Crocker.