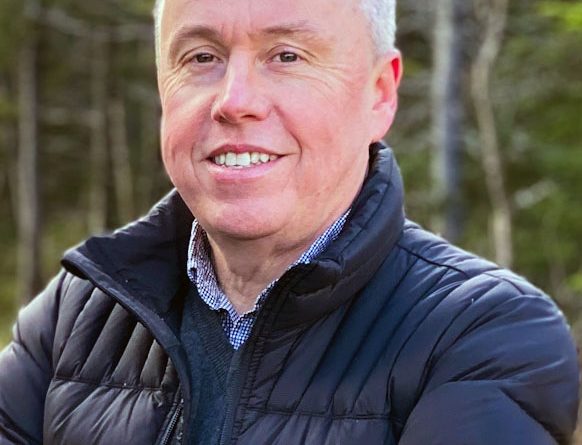 A long-time government staffer has tossed his name into the hat for the provincial election.

Ken Carter, born and raised in Harbour Breton and now residing in Conception Bay South, is the Liberal candidate for Topsail-Paradise.

Carter has been involved in provincial and federal politics for just over two decades. He’s recently been known as assistant to Avalon MP Ken McDonald. He currently works at the federal Ministers Regional Office for Newfoundland and Labrador, communicating between the province and Ottawa.

Carter and his wife have two sons, Jack, who works offshore, and Luke, a grade 11 student at Holy Spirt High, and Carter says that he’s running to ensure a good future for them.

Carter said the Liberal Party, often touted by critics as the ‘anti oil-and-gas’ party, has to support oil and gas while transitioning to a greener energy.

“Oil and gas is going to be around for 20 or 25 or 30 years,” he said. “There’s no doubt about that. From an emissions perspective, it’s something that we’re working on, and I think everyone in the industry knows that we have to lower our emissions. But we have that light sweet crude, that the prime minister has said, and the premier has said, that the last barrel of oil should come from Newfoundland and Labrador. As government, we have to support the industry, and we have to support people in the industry.”

Challenges facing the district, said Carter, are largely infrastructure related, and one issue stands out in particular.

“One issue that has come up in Paradise is the high school — or, lack of a high school. And I agree. They’re working on a configuration right now, but we can’t have kids that live on one side of the street go to one community for school and kids on the other side of the street go to another community. So, I’m certainly willing to work with stakeholders in the community and government as an MHA to make sure that we’ve got the best configuration of schools for Paradise and Conception Bay South.”

Carter said his years of experience in government offices make him an ideal candidate, running with the ideal leader, at the ideal time.

“When I came out of the gate, I was ready. You don’t make these decisions lightly. But now, I think, is the opportune time,” said Carter. “You need to be a good representative, and I think if you look at my experience and my background, I can be that, I have the skills to bring to the table. The other thing you need is a good party, and a good leader. And I think we’ve got that right now. I’ve got a lot of confidence in Dr. (Andrew) Furey.

“We’re at a very, very critical conjuncture. And we’ve heard that in the past, that we’re at a critical conjecture. But this one is very serious, from a fiscal perspective for this province. And at the end of the day, the people of this province got to decide who they want to negotiate on their behalf, because the federal government has got to be a major player to get us through the situation that we’re in.”

He acknowledged that holding an election during a pandemic and the cold of winter is certainly not ideal, but necessary.

The election is scheduled for Saturday, February 13. In Topsail-Paradise, Carter is running against PC incumbent Paul Dinn and NDP candidate Kathleen Burt.