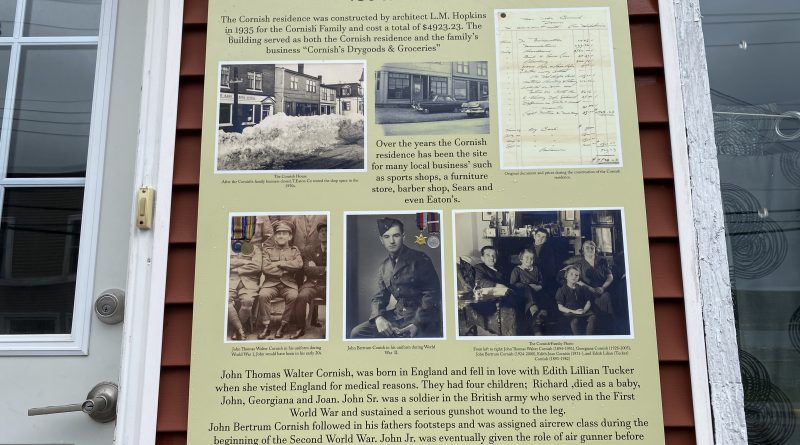 In recent years, much has been made of the pedestrian-friendly revitalization of Carbonear’s downtown, as new shops and restaurants opened their doors, coupled with the installation of new walkways, greenery and lighting all made possible by funding from the provincial and federal governments.

But, like all waterfront communities, Carbonear was built from the water on up, and Water Street has a long, rich economic history. Before the majority of the business community migrated to Columbus Drive in the 70s and 80s, business was done on Water Street.

Members of the Carbonear Heritage Society say that now, while more people enjoy Water Street than ever, is an ideal time to launch its history story board project.

“One of the suggestions at our last meeting was that we should try to compliment the doing up of Water Street, of which the Town has the first phase completed, by highlighting the history of the buildings,” said chairman Keith Thomas. “If people from our own community or other communities are out on a walk, they can stop and have a look at some of these storyboards and realize that there’s a lot of history behind some of these buildings.”

Former Carbonear Heritage Society chairperson Edwina Sooley had put up a storyboard outside of 179 Water Street about 10 years ago. That building was originally used as a telephone operating station, before being refurbished as a restaurant. It’s currently a coffee shop.

It’s a story familiar to Water Street, as decades old buildings changed hands over the years. The Society’s first storyboard, erected last weekend, pays homage to the Cornish Residence, and while it’s now used as a hair salon, 186 Water Street was originally the Cornish family residence and store, and has also been home to a sports store, furniture store, barbershop, and Sears.

Choosing the Cornish Residence as a sort of pilot was an easy choice for the society.

“That’s my grandmother’s house,” said Thomas. “I had lots of original pictures and documentation. I wanted to do the first board as kind of an example for the rest of them to follow.”

Thomas said that the society, which operates on donations and a small operating grant, plans to start small, with the hope that another business owner or two will give them permission to erect the boards on their properties. There is unlimited potential to tapping into Water Street’s historical reserve, he argued.

Thomas said that, with enough interest and funds, storyboards to rival those of the Loggers Memorial Park in Gambo, where large, almost life-sized storyboards outline the community’s logging history, could easily be erected. Even vacant lots, said Thomas, have a story to tell, as many of them were once home to bustling businesses.

In addition to installing the new storyboard, the society reprinted an old one outside of the Railway Museum which had faded over the years.

If you were to factor in the cost of labour, Thomas estimated the boards would run as much as $3,000, but cost significantly less because of those willing to volunteer.

He said that there has been plenty of positive comments on the storyboard, with some offering donations to continue the initiative.

“People are very happy to see the history of Water Street is being preserved,” said Thomas.