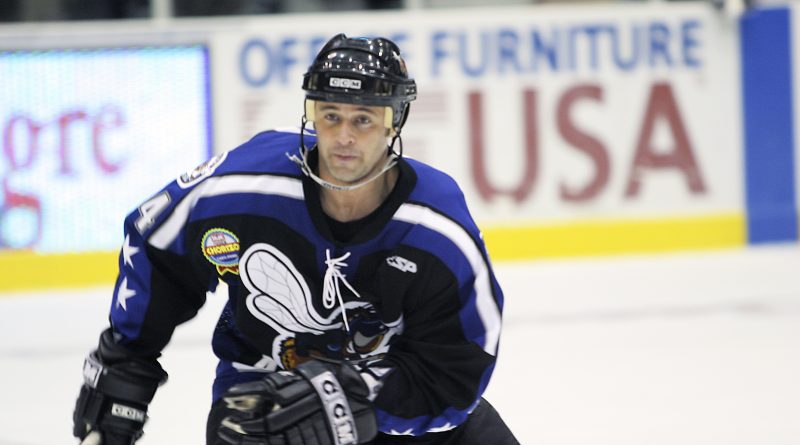 Chris Peach has been all over the world playing hockey, but perhaps the biggest award for his on ice prowess came earlier this year when he was inducted into Hockey NL’s Hall of Fame.

Born and raised in Foxtrap, Peach loved playing hockey and admired those professionals who managed to make a living at it. Like many youngsters, he dreamed about becoming a pro. Although he was aware how few people actually make it, he never let doubt set in and continued strapping up his skates and honing his talents.

Peach made his way through the ranks of local minor hockey and went on to complete a Junior A stint in the Maritime Hockey League, and in the college ranks with the University of New Brunswick Reds prior to stepping onto the professional circuit.

Peach was always a big scorer. In the Maritime Hockey League, he played with the Summerside Capitals and finished his time there as one of the club’s all-time top scorers, leading the team three times in scoring, and being named Rookie of the Year, as well as MVP during his time with the League.

That, Peach described, is where things really started to change for him.

With the Reds, he kept up his high-scoring pattern, making an appearance in 71 career games and amassing 40 goals and 33 assists.

“I did a degree in Phys. Ed, and once that was done, I decided to take a shot at the pro ranks,” Peach said.

“Hockey has always been around for me. I guess it became serious for me when I was 18-years-old and had the opportunity to leave home and go play junior hockey away,” said Peach. “That’s where it all started to come together, and when I realized that I was good enough to go out there and play the game I love. It was a lot of fun along the way. There’s a lot of places all over the world I can go to, even today, and end up meeting up with a lot of good buddies that I made over the years. At the end of the day, those memories and those friendships are what it’s all about.”

With some 600 games under his belt as a pro, including in the German and Italian leagues, Peach said it was almost surreal at times to be able to play hockey on an international level, and make a career out of it. He was named the WPHL’s Man of the Year for his community involvement with the Waco Wizards.

“I’ve learned a lot, you know? It’s been a really great experience, and now I’m able to coach younger kids and I feel like I’ve got a lot to give back,” Peach said.

In 2014, Peach hung up his game gear and took up a coach’s whistle and clipboard. He has coached both major midget and senior level teams and last year coached the AAA Bantam Tri-Con Thunder to a provincial title.

“That alone feels like something great to be a part of,” Peach said. “Seeing 14 and 15-year-old kids come together back at the start of the season to go on and win the whole thing.”

Unfortunately, the team won’t be able to represent the province at the Atlantics this year due to COVID-19 travel restrictions.

Looking back, Peach said it can be hard to fathom that he played for as long as he did, in as many places as he did.

“I must have done something right along the way, because it’s definitely not easy … You’ve got to play your very best every single night. If you don’t, you could be gone the next day,” Peach said. “I look back now, and I played over 600 games in 10-years. I’m real proud of that. It’s something that not everybody gets a chance to do.”

As for any young players who are up-and-coming in the province, Peach advises to just keep doing it for the right reason – a love of the game.

“Stick with your dreams, but at the end of the day, you have to work hard,” he said. “The NHL is not for everybody, but there are other opportunities out there for players as long as you work hard and are willing to bite the bullet and do what you need to do to get there.”

In recognition of his career, Peach was inducted into the Hockey NL Hall of Fame as both a player and a builder. Although he said recognition is not one of the factors that kept him in the game, it was exciting to see his name among the ranks of other hockey greats from the province such as Danny Cleary.

“I was so surprised when I got the phone call. It’s an honour, to be a part of that,” Peach admitted. “There’s a lot of great people there who have been a part of hockey. For me, to be a part of that now, it’s an honour. I just love the sport. Twenty guys on a team, that was my family for about 10 years. The teammates become your family, and at the end of the day, that’s just not something you can replace.”