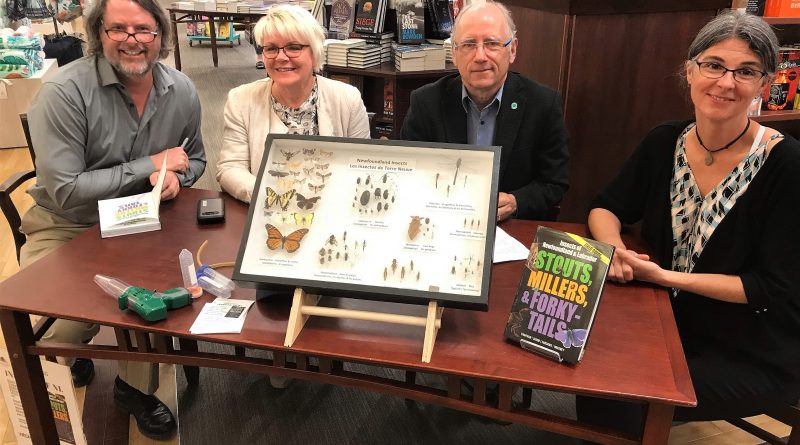 If you’ve ever had the itch to find out what exactly a stout, miller, or forky-tail is, or anything else in the great Newfoundland outdoors that has either flabbergasted or fascinated you, the most recent field guide published by Boulder Books might be just the read for you.

Peggy Dixon is an entomologist hailing from Conception Bay South. She, alongside fellow scientists and authors Tom Chapman, Carolyn Parsons, and Hugh Whitney, joined forces to compile as much information about some 300 of Newfoundland and Labrador’s bug, insect, and spider species.

Dixon is an entomologist with Agriculture and Agri-Food Canada. Among her entomology team is fellow entomologist Carolyn Parsons. Tom Chapman is an entomology professor at Memorial University, while Hugh Whitney is the former chief veterinary officer for Newfoundland and Labrador. With these credits, there was no questioning that the four of them, together, had quite an understanding of the bugs they would be covering in the guide.

The body of work that the four came out with is Insects of Newfoundland and Labrador: Stouts, Millers, and Forky-Tails, a field guide that explores the hundreds of insect species in the province. The 300-plus page book features up-close and personal photos of every species outlined in the pages.

The real question, Dixon said, was how they would manage to cover a list of creatures that spans into the thousands.

In order to see the project come to fruition, she and her fellow authors divided the list of insects among themselves so that each group of creepy-crawlies got a sufficient amount of attention.

“One of the publishers with Boulder Books actually took one of (Chapman’s) entomology classes at Memorial University.,” Dixon said.

“Boulder Books sort of specializes in field guides, and so she recognized that there was a bit of a gap there. There was no field guide for insects in the province … So, Chapman was approached about it, and he went and approached Hugh Whitney, who then approached Carolyn and myself. We only had room for around 300 species in the book, so out of the 5,000 or 6,000 that we know of in Newfoundland and Labrador, which ones do we put in? There are just so many … That was the first decision to make, just simply what to put in there.”

Each author had their own areas of expertise, and so that, on top of what the four of them deemed would be most recognizable and familiar to people in the province, is how they ultimately narrowed the list down to the insects featured in the guide.

“Things that you’d encounter in your house or in your garden, maybe while out on a hike, hunting, or fishing … the common things that people would see regularly, those are the ones we wanted to make sure to include.”

Each author was ultimately given a few relatively large groups of insects to cover within the book. Dixon got to work on dragonflies, beetles, spiders, and a few others.

“We kind of went away independently and wrote the sections on our own, and combined them afterwards,” Dixon said of the research and writing, which was carried out over a number of years. “It was four different voices and writing styles; we thought it was going to be a real challenge for the poor editor … but, it wasn’t, really. They had to take out maybe a few jokes here and there that Tom would slip in, but for the most part, it all came together rather smoothly. That was surprising, to me.”

Dixon allowed the term “field guide” may mislead potential readers into thinking the book is created specifically for people with either a pre-established interest in the topic, or knowledge about its contents. That is something she and the others hoped to avoid, and instead want to make the book an interesting read for just about anyone, from the insect-experts right down to young readers who may just want to know more about the carpenter bugs they see crawling across their basement floor.

To achieve this, Dixon said, the photos that can be seen plastered across each page were an important addition.

“We wanted to make it interesting for everyone. There are people out there who have an invested interest in this kind of thing, and probably have every field guide out there about all the seabirds and plants in the province, but then there are also the people who just don’t have that same interest who might come across the book,” she said. “Even if they’re not interested in learning every bit of info and reading through all the text, they can at least sort through it and come across something they had seen outside just the other day … even someone who doesn’t even want to do any reading at all, they can still just enjoy these pictures.”

Dixon added that with only a few exceptions, the photos featured in the guide were taken by Newfoundland photographers.

Some of the photos, she noted, would be very difficult to capture – such as skittish beach spiders that hide beneath rocks – and commended the work of the many photographers whose work made the guide possible.
“It’s art and science!” she said.

Anyone interested in picking up a copy can find them in most local bookstores, such as Chapters and Cole’s.