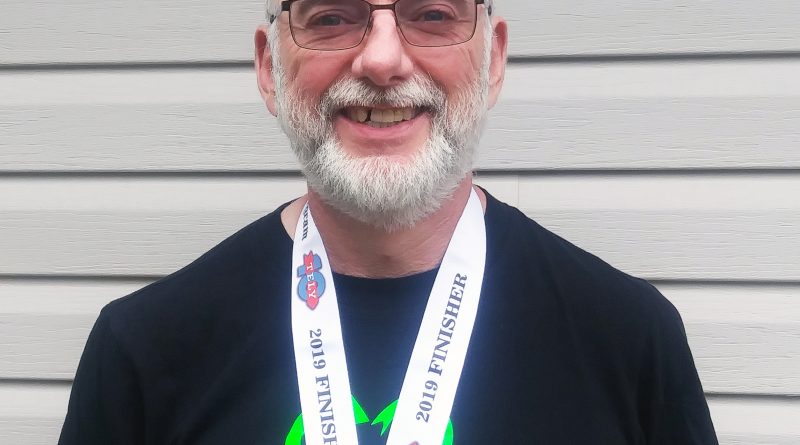 Thousands run the Tely 10 each year. Some are dedicated athletes, straining to reach perfect goals. Others are casual runners who want to compete and maybe set a new personal best. Others are aiming to lose weight.

And still others run, or walk, to help raise awareness for a cause bigger than themselves.

So is the case with Conception Bay South’s Clayton Delaney, who walked his first Tely 10 this year.

His name may sound familiar. That’s because Delaney, who has been volunteering with the Heart and Stroke Foundation since 2012, was instrumental in the long running movement to see Automated External Defibrillators (AEDs) installed in all schools across the province in 2017.

In October of 2008, Delaney was diagnosed with Arrhythmogenic Right Ventricular Cardiomyopathy (ARVC), a genetic condition that causes heart muscles to turn to fibrous, fatty tissue.

“My sister had gotten tested for ARVC, and convinced me to go get tested. I got tested in October, and in November I got a call to come in, and that the doctor would see me between procedures. I knew that wasn’t good,” said Delaney. “I went in and saw him and three weeks later, I had the defibrillator. That was December 5.”

From the time he had the genetic testing to getting the defibrillator was only six weeks.

“It changed everything,” allowed Delaney, who said the last time he was at the hospital previous to that was when he was five, and that he was otherwise totally healthy.

But then came years of constantly battling a condition that could strike at any moment with potentially deadly consequences.

“In 2012 I ended up in the hospital for 10 days and I was off of work for eight months because of an episode.,” he said. “From there it went downhill, to the point where I had to stop work and was on a plane to Ottawa.”

He was going to receive a new heart.

“The instructions were not to eat, not to take my pills, to be at the hospital within a couple of hours. So, I got my wife to call home and tell everybody.

We went over, and they weren’t even finished the prep, and the surgeon came in and said, ‘We’re going now. So, there was no time to think about it.

Which is good,” Delaney admitted. “I’ve known people who’ve had to wait 10 to 12 hours from the time they get the call to the time they have to be at the hospital.

“It was an interesting day,” he added, laughing.

Delaney and the donor family have exchanged letters, but did not meet.
He said that after being in and out of many different hospitals and health care institutions over his decade long ordeal, he has nothing but praise for the service that he received.

“I got a phone call from another media outlet looking for a news story while I was in Ottawa about wait times. And I spoke to them, and said, “I don’t have any wait times,” Delaney said. “The longest I’ve waited for anything as probably three weeks. Everybody I know that has had a major health crisis, the care is instant… If it’s critical, it’s taken care of, in my experience.”

He spoke especially highly of the University of Ottawa Heart Institute.
“The Ottawa Heart institute; you won’t find a better organization in this country, I don’t think,” Delaney said. “Everybody, from the cleaners to the porters, everybody is there to help you finally get better. Without those people, I wouldn’t be here.”

In part because of the care he received, and continues to receive, Delaney has been doing what he can for both the organizations and other patients.

“I determined when I was in hospital in early 2018, that if I got well enough, I was doing the Tely 10,” he explained, knowing that he could use the popular road race as a means to race funds.

Delaney began to collect funds for the University of Ottawa Heart Institute, the Heart and Stroke Foundation, and the Health Care Foundation in June.

Training for the Tely 10 began much earlier. He started in walking in September, and by January thought he would be able to do it within three hours. By June, he was thinking he could do even better than that.

He completed the 16-kilometre trot, which begins on Topsail Road in Paradise and ends near Bannerman Park in St. John’s, in two hours and 29 minutes.

“It was good. It wasn’t too bad. It was really crowded at the beginning,” he said. “I did it two or three weeks ago on a Sunday morning. I went out to give myself a push to see. You’re walking in spots where there’s no sidewalks, so your walking in grass and mud. It was a lot easier on the road.”

Or, said Delaney, who will be returning to Ottawa for a check up this September, you could just direct the money to any of the organizations directly.