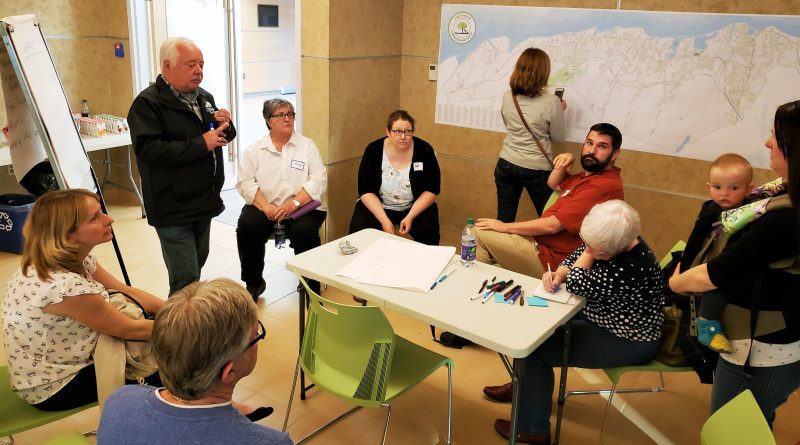 Conception Bay South could soon see the planting of four community gardens, judging by the interest shown at a public meeting late last month at the Town Hall.

Dozens of gardeners and would-be-gardeners turned up for the “brainstorming” session, which was organized on behalf of the Town by its director of community development, Jennifer Lake.

“Anyone who knows me knows I can’t keep an aloe vera plant alive,” Lake joked, as she started to outline the goal of the meeting. “So, that’s why my first thought was to get all these experts in the room. I’m here to help and support from the Town’s perspective, but I’m certainly relying on everyone to tell me, and us, what you want to see done.”

Lake explained the Town is interested in learning whether a community garden could – or should – work in CBS.

She was accompanied by Sarah Crocker, the education and outreach coordinator for Food First NL, a non-profit group that works to establish “food security” for Newfoundlanders. The organization has a community garden best practices toolkit, which outlines the steps required to start a successful community garden.

“Community gardens can look like a lot of different things,” said Crocker. “A lot of people think about the raised beds as being what defines a community garden, but really, it could be any shared space where people come together.

Crocker said one of the first steps is deciding what type of garden would best fit the town’s situation.

“It really builds wellness for individuals, families, and communities as a whole,” said Crocker. “There is, of course, a healthy eating component to it when you’ve got people growing their own fruits and vegetables. It’s a really interesting way to share skills and knowledge. And, then you’ve got the connection to nature, and land stewardship, which can ultimately be a gateway to other community developments in the future.”

Lake noted that the linear structure of Conception Bay South meant that a singular garden was probably not in the best interest of residents, suggesting possibly looking into satellite locations scattered around various areas in the community.

After some discussion, the residents who attended the meeting divided into four separate groups – one for each of the wards in CBS, so that they could explore establishing a garden in each area, and exactly to situate them. This will allow for local gardeners to have a much smaller distance to travel when going to their respective patches.

There were plenty of questions, such as what sort of crops could be grown, and other intricacies, however it was realized these are things that will need to be ironed out in the future.

One of the main goals of the meeting, Lake later explained, was to set up some sort of steering committee to serve as a go-between for the town and local gardeners taking advantage of the new project.

Deputy Mayor Richard Murphy was one of three councillors present at the event. He represented ward four.

“I’ve agreed to take on the role of getting information for council,” he said. “We’ll have to go talk to the recreation department, and I can’t make any promises, but the conversations will be there.”

The general consensus was that having four individual gardens would be the ideal situation, given the sheer size and layout of Conception Bay South. The initial goal is to see at least one of the gardens set up and ready to go this summer.

“When we do a bit of a further dive into locations at the departmental level, it may be that there’s no site in ward one that’s ready to go this year (for example),” Lake allowed. “Who knows? The big takeaway for me after all this is that we’ve got a better idea, and a direction, as to where we want to go. It’s clear to me now that people in Topsail, or people in Seal Cove, may not like to see just one big garden in Kelligrews. That’s what tonight was all about.”