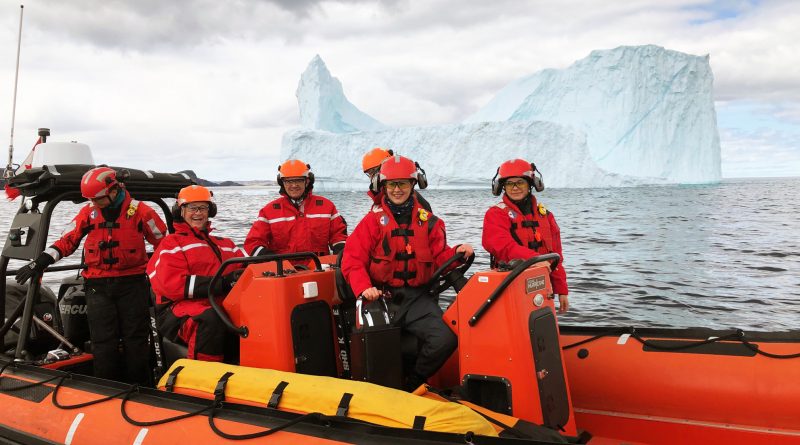 They haven’t been making waves publicly, but the people steering the effort to improve conditions for boat owners who use Seal Cove Pond as a channel to the bay are reporting good signs on the horizon.

The group is being skippered by Carl Morgan, who called a meeting of boat owners and concerned citizens in September 2017 in the hope of drawing attention from all levels of government to the deteriorating conditions at Seal Cove Pond. About 70 people showed up and tasked Morgan with striking a committee to work on the problem.

Some of the major concerns were the crumbling trestle running over the gut, the breakwater, which had deteriorated due to rough weather and storms over the years, and the channel, which is filling in.

Morgan told The Shoreline last week there are hundreds of boat owners in Conception Bay South, and surrounding areas, who make use of the pond.
“It got to the point where we were afraid that access would be blocked,” Morgan said of the channel that connects Seal Cove Pond to Conception Bay. “We tried to sound the alarm and bring awareness to that problem. From that meeting, there was a consensus that we would try to get something done.”

That’s exactly what Morgan and fellow boat owner Calvin Morgan have been trying to accomplish ever since.

Morgan said there seems to be some movement in getting the iron retaining wall replaced, and also to get the channel dredged. He noted that it’s not just access to the bay that is a concern, but also safety.

“It’s one of the harshest places on the shore, when there’s a sea on. If you’re not familiar with the channel, you could easily run into a lot of trouble – it’s an access issue, and also a safety issue,” Morgan said, noting that rocks protruding up from the channel floor can make for some tricky situations when trying to guide a more modern boat through it.

Years ago, that wasn’t quite as big a problem.

“Back in the 70s, the channel was in a poor state, but the boats were different back then – most boats were wooden with smaller horsepower motors. If you couldn’t use your motor, you could row in there, but you can’t be doing that these days,” Morgan explained. “That’s why we want clear, smooth access.”

Morgan has been working behind the scenes with several different agencies to see some progress with the repairs.

“It’s difficult because there are so many different groups (government departments and agencies), and we’re trying to bring them all together,” he said. “But, there is some movement, and we’re thinking we’ll be able to secure the necessary funding to make the necessary repairs – get the armour stone put there, get the retaining wall repaired, and so on. That’s our plan, anyway.”

While the pond unfortunately won’t be fixed up in time for the food fishery, which starts this month, Morgan hopes to see some of the work completed by this time next year.

He reckoned the volume of traffic coming and going from Seal Cove Pond rivals that of the Foxtrap Marina, when it comes to small boats looking for access to Conception Bay.

“Eventually, that pond has great potential for being a small boat basin, and that’s badly needed on this shore,” Morgan said. “Everyone that moved to this area, they’ve all got a boat in tow. I mean, that’s who we are, that’s our nature – people want access to Conception Bay, that’s the bottom line.”
Morgan said although progress is being made a little slower than originally hoped, he is remaining patient, confident the pond will soon get the treatment it needs.

“I’m letting things take its course. The people that we deal with and are assisting us, they realize that this is a very vital part of the town – it’s an important piece of the puzzle that is CBS,” he said. “We’re a coastal community. People need access to the ocean, and Seal Cove can provide that. That’s all we want, to try and keep that channel open.”

In the meantime, Morgan offered some words of advice for those looking to make use of the channel this summer.

“People need to exercise caution,” he said. “Because of the natural wave action and erosion, the channel is not as deep as we’d like it to be. People need to take their time there, and not do anything too foolish, or else they might beat the foot off their motor. Just act with a bit of common sense, is all.”