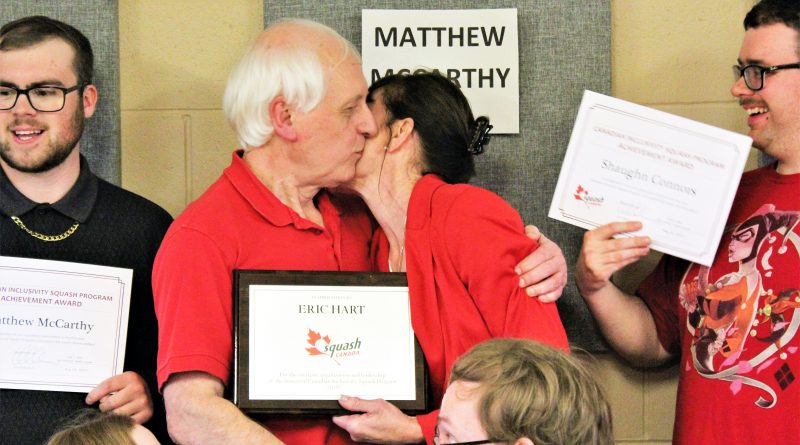 The clubhouse overlooking Parsons’ field in Seal Cove was booming with laughter and excitement as the players and coaches, and their families, gathered for the closing ceremonies.

The program, which started in January, aims to provide people with physical and intellectual disabilities the opportunity to play squash.

Organizer Eric Hart explained the program is not concerned with what specific disability the players have – as long as they can swing an arm, he’s ready and willing to teach them how to play the sport he’s become so passionate about over the years.

Usually, squash seasons begin in September, so Hart says beginning in January made for some awkward timing for the program. However, he was pleasantly surprised to see how popular the program had gotten with the players he had accumulated.

“My goal was to have seven or eight players in the program – we got nine. I had a goal of having two assistant coaches – we got five,” Hart said. “This is a watershed moment in Canadian squash history, and it happened in a small community like CBS. It didn’t happen in Vancouver or Toronto – it was right here … We’re actually the first fully-inclusive squash program in North America, and in fact, the squash federations of Norway, Australia, and the United States have asked us, that once we develop and are satisfied with our model, that we share it with them, because they want to do it too… Even though we only had nine children here in CBS, it’s going to be much bigger if we can make it go to every province, and there’s no reason not to. Really, there’s no reason to have an inclusive squash program in every squash facility – they could have it at the Aquarena, they could have it at the Delta.”

Hart, the engine behind the program, after having run the junior squash program in CBS for some 20-years, and also being involved in an inclusive softball program in the summer, is quick to share the credit.

The local Lions Club has been a big supporter of the new squash program, he pointed out. Hart said the Club donated $1,000 to help cover the costs of the program. On top of that, they have another $500 ready to go in case Hart can manage to put together a wheelchair squash program. That’s been a goal of his since starting up the inclusivity program, he admitted. He hopes to see progress made toward a wheelchair program in the coming months.
“This opportunity is going to be out there, hopefully. If people who are in wheelchairs would like an opportunity to learn how to play squash, contact me,” Hart said. “The game plan, right now, is to make some inroads for wheelchair squash in the immediate future.”

Hart has an optimistic outlook for squash, especially at the local level. Given the success of the inclusive program this time around, Hart said the plan is to run the program on an annual basis, starting this time in September and finishing up in May.

On top of that, he says that he and others involved in the program plan to push for more recognition of the program. Admitting it’s a long-term goal, he said he would also like to see more courts set up, which would ultimately make for longer sessions, and more time with rackets in hands.

“When you’re teaching people who are disabled, your groups need to be a little smaller to accommodate that,” Hart explained. “When I ran the junior program, I would have somewhere between eight to 10 people in a group. For this program, I figure six, maybe eight, would be the right size. If I’ve got two groups of eight, I’m going to be looking to the Town and saying ‘I need another 90-minutes.’ What I’d love for the Town to do would be to set up two more squash courts. That way, instead of handling six players, we could handle a dozen at a time.

“That would be lovely, because these people want to play with their friends. If the facility doubles the number of courts, that means they can come with 11 other friends, and that’d be good.”

The love and appreciation the players have for Hart and his colleagues was clear Monday night. After wrapping up an interview with The Shoreline, Hart re-entered the main room of the ceremony to be greeted by an excited young player, embracing him in a tight hug and thanking him for the work he’s put into the program.

It’s this reception, Hart said, that reminds him why he does what he does.
“I feel grateful. I feel a great level of satisfaction that they benefited from it, and they enjoyed it. I’ve always told kids who I coached over the years that if they didn’t enjoy it, they didn’t need to come, but all these players come ready and willing to do what it takes. They loved it, and that’s the main thing, because they’re having fun.”