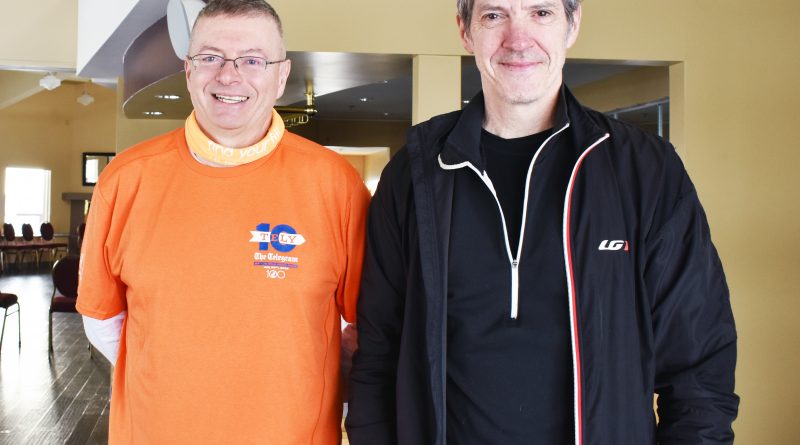 Sean Dawe once cursed the snow but five winters ago he began snow biking and now he cannot wait to ride his fat bike through the snow.

Dawe lives in Paradise. “The old rail bit that runs through Paradise. That is where I mostly ride,” he says. “I try to not ride on the roads.”

According to Dawe, he bikes “winter, summer, spring, day (and) night.”

In 1984, Dawe decided to start racing in a bike club at his school. By 1985, he rode in the Canadian Summer Games, and he went on to do several other road races, including mountain biking and short track races.

He has had many more adventures since he started snow biking.

Dawe recalls a time when he and eight friends rode out on a beautiful day to the Spout on the East Coast Trail between the Goulds and Bay Bulls. “It was a six-hour ride, it was really hard and by the end of it, I was crying,” he says. “It was ‘round noon the sun came out. You could just feel the way the snow was pushing away from the bike.”

The sun had melted the snow slightly, which caused a problem for the bikers. Soft snow causes the bike to slip all over the place, which makes it hard to keep the bike up straight and makes pedalling it physically harder.

“The snow got really soft when the sun came out and it was just really, really hard to keep the bike going on the way back,” Dawe says.

“I just pedalled harder,” Dawe recalls when asked how he rose to the challenge.

Despite the soft snow, Dawe said he was happy to see the beautiful scenery at the spout. He was even happier because when they arrived, “it was actually spouting.”

According to Dawe, he began snow biking in 2014, at a Global Fat Bike Day event, on the first Saturday in December. He tried a fat bike for himself and decided he would like to start biking in the snow.

Don Boyles, treasurer of Bicycles NL, says snowbikes are often called “fat bikes because the tires are so fat. They are upwards of almost five inches in width, which enables the bikes to stay on top of the snow. You ride with low tire pressure so that there is a lot of rubber on the snow and it rides pretty well.”

Boyles was at the Wisdom Tree providing direction and serving food with Canary Cycles for the Pippy Snowbike Festival 2019, on Sunday morning.

At the Admirals Green Golf Course Club House, 80 snow bikers registered and gathered with their snowbikes. Dawe was one of them.

“I am here for the fat biking,” Dawe says.

Glenn Smith of the organizing committee says a small group of bikers has been riding snowbikes for years and a lot more are starting to get into the sport. They created three different categories based on the bikers’ skill levels. The categories allow for fast, medium, and slow bikers, so no one would be left out.

“The future looks like this is going to be a growing annual event,” Smith says. “We may need to increase our groups. Right now, for the middle group, we have almost 50 riders, that’s a lot of people to keep together as a group.”