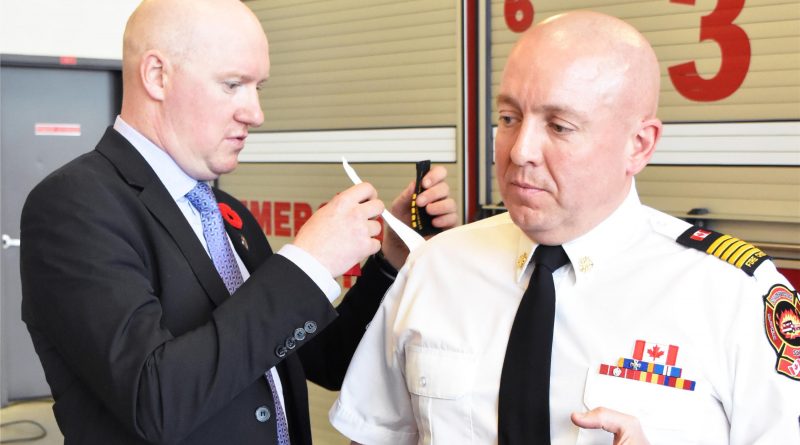 The CBS Fire Department has signed an agreement with Wounded Warriors Canada to provide a second layer of support for members and their families who may need help with their mental health.
It’s the first agreement of its kind between a fire department in Atlantic Canada and the national charity, which was initially started to offer free mental health services to veterans.
Fire Chief John Heffernan and Mayor Terry French signed the agreement on behalf of the town. Scott Maxwell, the executive director of Wounded Warriors Canada, signed for the charity.
“As a Town, we’re not only committed to the safety of the public, but also the safety of our employees,” said Mayor French, “including our officers, firefighters and all staff members. We recognize that building strong support programs for our first responders, as well as for their families, is critical to their wellbeing as well as to the safety of our operations.”
French said the agreement is an important step forward in the care of the town’s firefighters. “The Fire Department is witnessing a change in the way in which we help its members by finding novel and notable methods to deal with the struggles that firefighters, and indeed all first responders, face on a regular basis,” he added. “We see this partnership as a comprehensive enhancement of the support we currently offer our members. An important point to note is that Wounded Warriors programming is provided at no cost to participants no matter where they reside in Canada. This is made possible thanks to the generosity of others who care deeply for the health and wellbeing of those who serve our community at home and abroad.”
French said he is proud the CBS department is the first in the region to sign the agreement. “Most importantly, this new agreement shows our members and their families just how much we care about their mental wellness and indeed their safety,” he said.
Chief Heffernan noted the Town and Fire Department have been very proactive in looking out for the well being of its firefighters.
“Through my work both with the Canadian Armed Forces and as a fire chief I witnessed firsthand the effects of operational stress and operational stress injuries on members,” said Heffernan, who is a chief warrant officer in the Canadian Forces and Regimental Sergeant Major of 37 Service Battalion in St. John’s.
“And while we’ve come a long way over the last five years with respect to properly acknowledging and supporting those affected, we still have a long way to go as a country and that’s why I believe that today is such an important moment for our town.”
Heffernan said the programs offered by Wounded Warriors are innovative and evidence-based. “We are stronger when we are in this together for mental health and our department is certainly proud to partner with this wonderful organization.”
The chief noted that retired members of the department can take advantage of the programs as well.
Heffernan thanked Mayor French, council and the town for supporting the initiative.