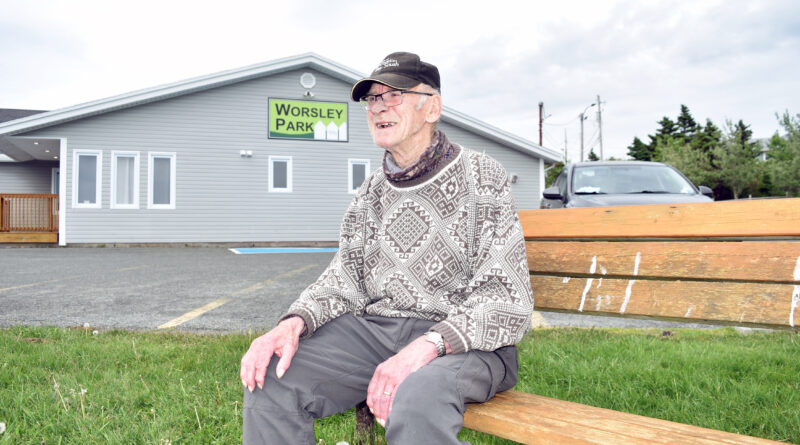 CBS hockey coach has a lifetime of happy memories on the bench and behind the scenes.

We tried reaching Norm Simpson back in April, hoping to showcase one of CBS’s longest serving contributors during National Volunteer Week. But the 84-year-old was at the rink. Not behind the bench this time, but cheering on his grandson Aiden.

Hockey rinks and baseball diamonds and drill halls have been a second home to Simpson since he moved to CBS as a teenager. You’d be hard-pressed to find anyone over 50 who grew up playing sports in CBS whom Simpson has not coached. And he’s about the last person to toot his own horn. Last week, we finally pinned him down on a bench at Worsley Park overlooking Manuels River as it enters the bay, a favourite spot of his for having a quiet smoke and running into old friends.

“I was born on the Labrador, Rigolet,” Simpson says, when asked about his childhood.

His father, Alexander Simpson, better known as Jack, had emigrated from Scotland to take a job with the Hudson’s Bay Company. He paid for his passage by working as a steward on the boat that brought him to North America. In Labrador, Jack Simpson met and married Beatrice Flowers of Northwest River.

“Every summer for years, we used to get on the Kyle and go to Labrador and spend the summer down there, and then when school was on, we’d come back and go to Bay Roberts,” said Norm.

The young Simpson loved Labrador, especially sailing into the remote communities along the coast. “Oh God, yes. We used to go fishing and berry picking and whatever else you could do there,” he says.

He also liked Bay Roberts. “Bay Roberts was good,” says Simpson. ” I had a lot of good friends in Bay Roberts… I think it was four years we were there. Then we moved into St. John’s (for about a year) and then we moved up here (to CBS) in 1953… I was in Grade 8 and went to Long Pond School (St. George’s).

The dozen or so communities that eventually became CBS was a good place to grow up, especially if you liked sports.

Simpson played hockey with Kelligrews, Manuels and a team called the Combines, which consisted of players from all over the Shore.

The games were played at Prince of Wales Arena. Simpson, with his natural skating ability and speed, was usually a centreman.

He also played junior hockey with a trades school team against the Guards, Feildians, St. Pat’s and St. Bon’s at Memorial Stadium.

At one of the junior games a fellow from the St. John’s Council team in the Civil Service league saw Simpson’s moves and invited him to play with them.

“The funny thing is, Howie Meeker was on the team,” says Simpson. “Howie got me behind the net one time after the whistle had blown and he says, ‘Now kid, you get up to the blue line there and I’ll feed you.’ And jeeze, sure enough buddy that’s what he did. I used to get up by the blueline and wait for him and he’d drive the puck up to me and I’d take off with her.”

In summer, Simpson pitched for a baseball team based in Kelligrews that used to go out to Mundy Pond, Mount Pearl and Shea Heights to play.

“Carl LeDrew started it,” says Simpson, whose best pitch was a deadly curveball.

CBS was also where Simpson met his wife to be, Isabel Tilley, or Bel, from Kelligrews.

“I don’t know how we met, knocking around to the dances and the snack bars and stuff like that,” says Simpson. “It (growing up on the shore) was really, really good. I really enjoyed it and Belle did too. We went to high school in Foxtrap.”

By then Simpson had also become an important contributor to Foxtrap Company of the CLB, though oddly enough, it started during the year or so that he had been living with his parents brother and two sisters in St. John’s.

Simpson loved the CLB, the sports especially, and the drills and parades, and camping trips to Harbour Grace. When Simpson’s parents moved the family to Dawes Road, (now called Anchorage Road), Simpson would walk out to get the bus to St. John’s for the weekly sessions. Eventually he graduated into the CLB’s army cadets.

“I was at that for ever so long and Mr. Saunders called me one time at home and says he wanted a drill instructor for the Foxtrap CLB, and he asked me would I come up. I says, ‘Sure, indeed I will.’ So, I went up with my army cadet uniform on teaching drill.”

Simpson taught drill for a couple of years and eventually joined Foxtrap Company as a Lieutenant.

When Simpson got married, he and Bel moved to St. John’s, but she didn’t like it there.

“She got poisoned with it, was always in a crooked mood, or something like that, and she wanted to come back here,” Simpson allows. “So, we got a house in Long Pond and then we started to build ours (in Manuels).”

The couple had two children by then and some years later a third.

As their children became involved with sports and community groups, so did the parents. Bel spent some 50 years with the Girl Guides and participated in just about every activity and group that Norm was involved in.

First there was Holy Spirit Minor Hockey, then the CBR Regional Association. In addition to coaching house league and all star teams, Simpson was a skating coach for just about every player who ever came up through minor hockey during those years.

“You know, it’s a funny thing,” he says quietly. “Some of these fellows are 50-odd years old now and whenever I run into them, I’m still ‘Mr. Simpson.’ Honest to God. I can’t get over that. I’m still “Mr. Simpson.”

He remembers a Holy Spirit team he took to Harbour Grace in the early 1970s for a series of games. The children were eight or nine years old.

“We got beat 13 to nothing, 11 to nothing and 9 to nothing. I think it was Neil Kearley (now the principal at Ascension Collegiate) who, when we got in the dressing room says, ‘Mr. Simpson, if we had been here for two or three more games, we would have won.'”

Those were the early years of minor hockey in CBS. Under the tutelage of Simpson and others, the teams quickly improved. Simpson coached nine teams to gold medals in tournaments throughout the province.

“I got a gold medal, but I was only the coach,” Simpson says. “The kids won the gold medal, not me.”

He also helped start a baseball league in Topsail, along the now late Reg Jones, Dereck Miller, Lawrence Stone and a woman Rideout, “and I can’t remember her (first) name,” Simpson says apologetically. “We had a real good league going. We had four teams I think it was.”

Simpson is known for never losing his cool on the bench or in the dressing room, and always treating players with kindness and respect, even when they make mistakes.

“There is a reason why you made a mistake,” Simpson says. “I’ll tell you what you did wrong, and that’s it then, it’s over… No, I used to never get mad at anybody. There’s no good getting upset. If somebody does something wrong, tell them where they went wrong and they won’t do it anymore. That’s the way I used to work it.”

Simpson’s favourite memories of coaching involve the kids. He has hundreds of memories and can recall stories with amazing detail. The other thing Simpson loved about coaching was the friendships with other coaches and organizers and parents.

In addition to the hockey and baseball, Simpson volunteered his time with a host of other groups. He was president of the Holy Spirit PTA, though he and his children were Protestants and the school was Roman Catholic at the time. He coached ladies’ softball, and played on a team that competed at an Eastern Canadian tournament held in Nova Scotia. He was a torch bearer for the Newfoundland and Labrador Summer Games when CBS hosted them in 2011, and was on the mission staff of the Newfoundland and Labrador team that went to the Canada Games in 1989.

“It was fantastic,” he says, of that trip. “We had an office and we had to look after any complaints or problems, and all the players got what they deserved.”

Simpson received a Recreation Award from the town in 1983, and was later inducted into the CBS Sports Hall of Fame as a builder and athlete.

One of his funniest memories involves figure skating. He and fellow volunteer, the late Rennie Molloy, built props for shows and helped in any other way they could. One year, before the group’s big season finale, Simpson was tagged by Emily Babb to fill 15 minutes of ice time while the skaters lined up behind the scenes to make their big entrance on the ice. Simpson corralled Clyde George and the club’s professional to dress up in costume with him and play fools until the children were ready to perform. Simpson himself donned a dress and wig.

“And people loved it,” he says, smiling.

At 84, Simpson has seen a lot of old friends pass on, though he’s still hale himself, and his mind remains sharp. Simpson and his family were up at the cemetery a little while back visiting graves and chatting with other visitors when he was struck by the number of names he recognized on the headstones, people he had known over the years.

“Indeed I did,” he says. “A good one too. She keeps me on the straight and narrow.”

And while CBS has changed a lot since the days when he and Bel were courting, Simpson still loves it here.

Looking back over it all, how did Simpson do as a volunteer and coach?

“I did a half decent job, I think,” he says, modestly.