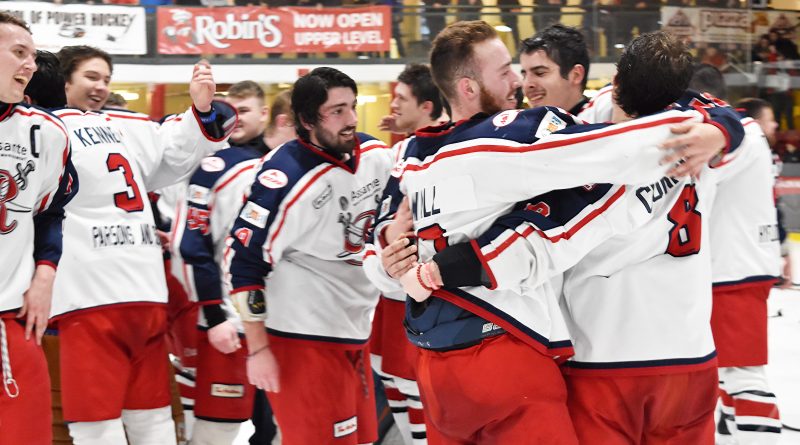 After a year off the ice, the CBR Renegades, the defending champions of the St. John’s Junior Hockey League, will get a chance to defend their title against seven other squads this season starting with their home opener Saturday evening against the Paradise Warriors.

Covid-19 sidelined the whole league last year, meaning it’s a new start for all teams. The only team that won’t be back is the Trinity Placentia Flyers, which was based in Whitbourne.

“As of right now, it’s a regular season with 28 games,” said CBR Renegades spokesman Kevin Tobin, who is a member of the team’s volunteer executive. “We’re not sure where the fan attendance is going to be.”

Tobin said most of the team’s usual 100 to 150 fans are composed of families, young people, the girlfriends of players and other supporters. With the size of CBS Arena, the team should have no problem accommodating that number, and even more, even with requirements for masking and social distancing, Tobin said.

The team uses the proceeds from the gate to help cover its ice time rental costs. The other costs are borne by a group of corporate sponsors. So, the more fans who show up, the more money the team has to pay for its game and practice times.

“We’re one of the fortunate ones in that do pretty well with the sponsors,” Tobin said. We’re getting most of the sponsors back that we had.”

This is the team’s 12th season and many of the sponsors have been with the Renegades for years. The chief sponsor, Assante Wealth Management, has backed the Renegades since the beginning.

Tobin is not predicting where the team will come out this season. The last full season that everyone played, 2019-2020, CBR won a fast-paced, hard-fought championship series against the league’s perennial favourites, the Mount Pearl Blades.

“When we won the championship two years ago, the players who were rookies then are now the over agers,” Tobin noted. That includes team leaders Nick Gosse, Dominic Nugent, Jacob Gill, Lucas Osmond, and James Kennedy.

From what he’s seen of the practices, Tobin said the Renegades have a strong corps of forwards, including the power play unit, and two strong goaltenders in Jordan Blackwood, who won the MVP trophy in the championship year, and Nick O’Brien, whom he described as a “very good goaltender.”

“So goaltending is solid,” said Tobin. “Defense is where we’re short a few players, but we picked up a few players in the draft.”

That includes Cody Thorne, originally from Alberta. Because last year’s draft was suspended due to Covid, the league held two drafts this year. CBR was owed a first pick from the Paradise Warriors for having given them some players in their inaugural season. The Renegades used that pick to draft Thorne. “From what I’ve seen of him, he’s a smart hockey player,” said Tobin.

“I don’t know if we’re going to be where we were two years ago,” Tobin admitted. “Mount Pearl is perennially good. I guess they’ve got a great hockey system and good coaching.”

But Tobin added the Renegades have good coaching too. Head coach John Baldwin is back this season along with assistant coach Morgan Warren, and a newcomer behind the bench, Mike Lee.

Along with Mount Pearl and CBR, Tobin reckons the CBN Junior Stars and the St. John’s Caps will round out the league’s top 4 teams.

“Bay Roberts (CBN) usually has a good, solid team, and our games against them are always fairly intense,” Tobin said.

“I think Paradise is going to better this year,” Tobin allowed. “We play them in our home opener on Saturday, so we’ll see.”

The Renegades actually have three or four players from Paradise – the last of the recruits to make the cut several years ago before Paradise iced its own team.

“We’re the defending champions, so I hope our team is up in the mix,” said Tobin. “As you know, all eight teams earn a playoff spot and once you get in the playoffs anybody has got a shot… Our veterans are still there, we’ve got the coaching, but I’m making no predictions.”