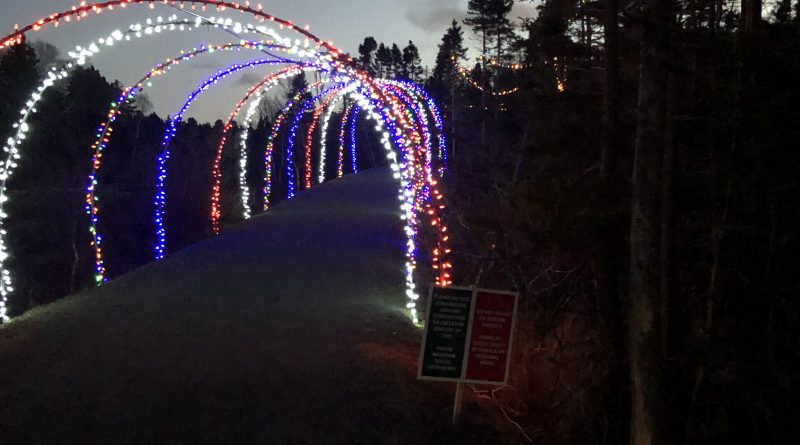 As the saying goes, every dark cloud has a silver lining, and in the case of the annual CBS Santa parade having to be cancelled this past Christmas because of Covid-19 restrictions, the lining turned out to be silver, red, blue and many other colours.

In place of the parade, the Town and the Manuels River Centre teamed up to present “The Light Walk” along the trails in Manuels which attracted hundreds, perhaps thousands of people over the last couple weeks of the year, many coming from towns well outside Conception Bay South.

The walk saw potions of the trail in Manuels River lit up with colourful Christmas decorations, guiding people through the dark of night as they admired the display.

The Light Walk was a first for the Town, and proved to be quite a favourable attraction.

Janet Rumsey, the Executive Director at the Manuels River Hibernia Interpretation Centre, said she was quite pleased with how it all panned out, explaining the idea for it was originally brought to the Manuels River crew by the Town. Without their help, she said, the Light Walk would never have been able to happen the way it did.

“Right away, we were totally on board. It was a big initiative by the Town, and everyone just came together under this big collaborative approach to see it come together,” she said.

Over the course of about a week, Town staff built the displays and wired the lights.

The Light Walk opened on Dec. 20, with the lights on full display every day thereafter for four to five hours each evening until Sunday, Jan. 3.

The lit-up portion of the T’Railway spanned about half a kilometre and was open to the public every night.

Rumsey described the whole experience as a great success. Although they do not have trail counters along that portion of the trail, she said, the social media posts alone reached some 24,000 people, and suspects the numbers seen at Manuels River over the course of those two weeks were close to the same.

“It was great, too, how respectful people were of the COVID-19 protocols,” she said. “It was really amazing to watch it all play out. We expected it was going to be nice, but when they turned it all on, it was just absolutely incredible. I couldn’t wait for people to see it.”

Rumsey said the lights gave people a unique opportunity to walk the trails at night. This is something that normally can not be done properly, giving walkers a whole new experience.

“It had a huge community feel to it, and that’s something I’ve missed,” Rumsey added. “It brought everybody together, and it seemed like that was something everyone else was feeling as well, to see so many people out and about on the trails, taking pictures, and all that. That, I think, is something that was really needed after the year we’ve had.”

Now, the question is whether or not this is going to be something Manuels River sees happen again in the 2021 Christmas season.

At the end of the day, Rumsey said the Light Walk turned Manuels River, and CBS in general, into one of those “places to be” during the holidays, similar to the Port de Grave boat lighting that has become a popular annual event.

Rumsey said that Manuels River is already on board with the idea, but it is hard to say what may come in the next 12-months, and nothing can be set in stone just yet.

“Our fingers are crossed, but we’ll have to wait and see. Manuels River is definitely on board to do it again next year: maybe even bigger and better,” she said.