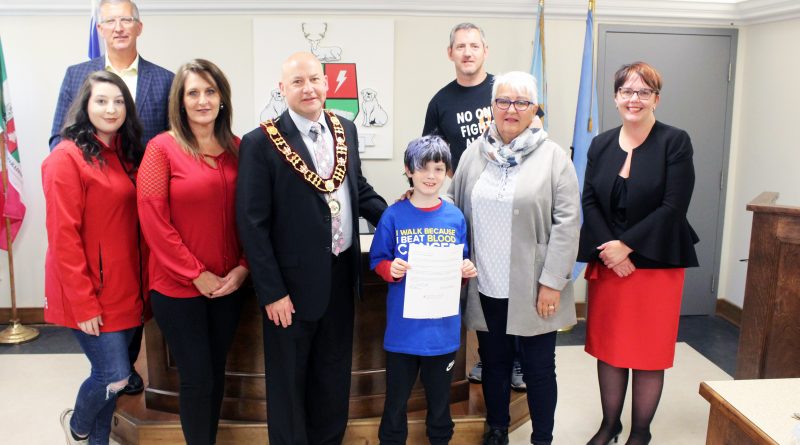 Members of the Leukemia & Lymphoma Society of Canada (LLS) were in Paradise council chambers Tuesday, Sept. 17, for the signing of a proclamation, and also to announce some exciting news.

“Blood cancer is one of those unknown cancers in our society. In Canada right now, it’s the fourth most frequently diagnosed form of cancer, and the numbers are rising steadily,” said survivor, former premier and LLSC board member, Paul Davis.

Davis announced the third annual Light the Night event will take place in Paradise Park this year. In previous years, it was held in St. Johns.

One of Newfoundland’s top and longest running traditional music bands, The Masterless Men, will perform at the Paradise event. The band has been touched deeply this year by the reality of cancer. Former singer with the band, Chuck Lewis, passed away in February following a battle with cancer.

His brother, Mark, was present in the council chambers, along with members of other families who have been affected by blood cancer, for the proclamation signing.

Della Ryan was another one of those present for the announcement. She told council her doctor told her just the day before that her cancer was in remission.

David Young, 9, of Paradise was also in the council chambers. He was last year’s Light the Night hero.

“We’re very excited about the walk coming to Paradise this year. That’s our hometown,” said David’s mother Melanie Murphy. “And we’re very happy for all the research that has happened in the field of blood cancer research.

Even 20 years ago, David’s prognosis would have been a whole lot worse.

And though David didn’t have any words to share with council, the back of his shirt said it all — “Survivor.”

The event will take place at Paradise Park on Saturday, Oct. 19, beginning at 5 p.m.