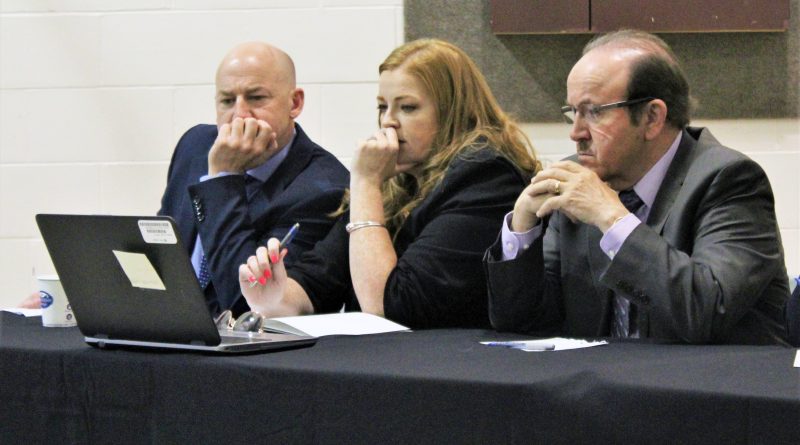 In response to an application to erect a Tim Horton’s restaurant near Octagon Pond Elementary, some Paradise residents got together to raise their concerns Tuesday.

Roughly 20 residents and concerned parents, as well as members of council, gathered at the Paradise Rotary Community Centre for a presentation from a group of residents who are opposed to the proposed business on Sgt. Donald Lucas Drive, across from where Octagon Pond Elementary is located.

The session was spearheaded by Susan Pennell, Jennifer Button, and Curtis Beazley, who highlighted their reasons for opposing the development.
The application, which included a drive-thru, was received by council in mid-April.

“Looking at the proposed development, it’s in a commercial neighbourhood zone, adjacent to a residential medium-density zone, where drive-thrus are not permitted,” Button said. “We really feel, where the proposed drive-thru exits onto Sgt. Donald Lucas Drive, right into the school zone for Octagon Pond Elementary (that) it’s in such close proximity with Topsail Road that it creates an immediate safety concern. All in all, we deem this development a hazard to public safety, not consistent with the policies of the municipal plan.”

Beazley noted that traffic coming and going from the proposed restaurant would have to contend with the daily traffic to and from the school itself which includes parents dropping off, or picking up, their children, as well as school buses.

“Student safety is our concern … This school zone is for young elementary school students aged four to 12, and do not have the awareness of the potential dangers from congested traffic,” Beazley said.

Beazley said the restaurant would cause a significant increase in traffic. On top of that, loitering and littering are inevitable.

Some residents raised concerns about light pollution that would stem from the LED lights that would be on at all times during the night and worried about the effect on their properties’ resale values.

Beazley says this type of lighting situation is simply not suitable for a residential area.

Although the application is still a ways from seeing approval, councillors in attendance seemed to appreciate the issues highlighted.

Mayor Dan Bobbett explained the drive-thru is considered a discretionary use under the Town’s development guidelines, which is why the public was asked to comment. He said hearing out the concerns of citizens is part of the process.

“This is about getting feedback from the public, hearing what they have to say and their concerns, and making an informed decision based on what they tell us, and what our professionals tell us,” he said, acknowledging the sheer number of emails council has received on the application.

For those wondering when a decision will be made on council’s end, Bobbett said it could be happening soon.

“The comments from residents have to go through the committee … So, quite likely, there could very well be a recommendation at the next council meeting for or against,” he said. “Then, there will be a discussion again. So, the process keeps going from there. Then, the applicant can appeal the decision within 14 days.”