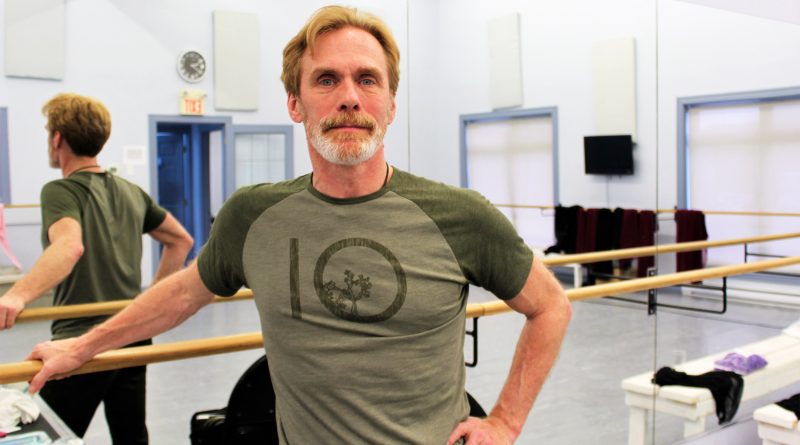 After receiving a provincial arts award recently, a local dancer says he is humbled by the recognition.

Martin Vallée wears many hats. He is a choreographer, a dance teacher, a performer, and a creative director. For decades, he has worked closely with dancers and performers in the province. Earlier this month, ArtsNL recognized his efforts by awarding him the BMO Bank of Montreal Artist of the Year award.

Vallée and his wife Jennifer Foley were ballet dancers for some 15-years. After retiring from that portion of their career and moving back to Newfoundland, they pursued their goal of opening their own dance studio and establishing a company here in the province that focuses on the performance art that the two had been so deeply invested in for so long.

Initially, the two got involved with the Kittiwake Dance Theatre in St. John’s, taking it over and opening up a new studio in Conception Bay South. Vallée says they decided to bring the business to Conception Bay South at first for a number of reasons – it was where Foley’s parents lived, and there were already a number of dance schools readily available in the St. John’s area, so it was a good fit for the time.

Vallée soon realized that Newfoundland was particularly lacking in dancers trained in classical or contemporary ballet. So, they took it upon themselves to start training people in the form of dance they had grown to love so much.

The pair have since moved their studio to Mount Pearl with the hope of reaching a broader audience.

“We moved the studio just to be on the fringe of CBS, Mount Pearl, and St. John’s just so that we could connect to more people,” Vallée explained. “We liked the area, but at the same time, we were too far down in Conception Bay South to get anybody from other areas. Back then, when we first started, that was a bigger issue than it is now, with Paradise being more of a bigger populace nowadays.”

Vallée works with Kittiwake as an artistic director, on top of his many other duties. He says the company has seen significant success over the years, especially as dancing becomes more and more popular in the province.
“We have two full-time dancers that we’ve hired, and we also work with 16 company members that are being paid per production year-round,” he said.
Vallée said it’s humbling to win something like the BMO Bank of Montreal Artist of the Year award, but it’s not what he originally set out to obtain when embracing dance as a full-time career.

“I’m not very good with awards, to begin with. The first reaction I had was, unfortunately, embarrassment more than anything else. I get over it, of course, but at first it’s more of that,” he said, followed by a few chuckles. “You have this thing, as a dancer. It’s almost a sense of unworthiness for these things, you often hear that when you’re younger, but it makes you work a lot harder as well. I knew I was nominated, and I was happy with that.”

While Vallée appreciates that he has made a contribution to dance in the province, he said winning the award was very surprising to him. It wasn’t until he had spoken with other people about the award that he became more comfortable in accepting it. He said he was shown just the kind of impact he was having on individuals he worked with.

“In that sense, I’m comfortable with that. That’s what I’m really trying to do at this point – to really promote dance to the point where it’s more accessible to people,” Vallée said. “That’s how you drum up interest, and get more talented people to stay here in Newfoundland. By being recognized with this award, in the grand scheme of things, it’s just going to help what I’ve been trying to do for a while now, and for that, I’m very grateful.”

This type of dance, Vallée said, has not always had as much of a spotlight in Newfoundland, especially when compared to more common forms of performance art, such as singing and other music-based arts. But there has been significant progress in the reception from the public.

In 2018, Vallée premiered his one-act ballet “Alice.” This was the first feature-length ballet choreographed here in the province in at least five-years. Vallée has also collaborated with some big names such as the Calos Youth Orchestra and Duo Concertante to put together a provincial tour of the “Nutcracker” ballet, which consisted of eight performances in total across the province in places such as Stephenville and Gander.

“Now, we’re starting to tour. We’re going to central, the west coast, and we’re trying to bring it over there and find talent over there,” Vallée said of the dance style he teaches. “We want to foster that, and so that’s where we’re at right now.”