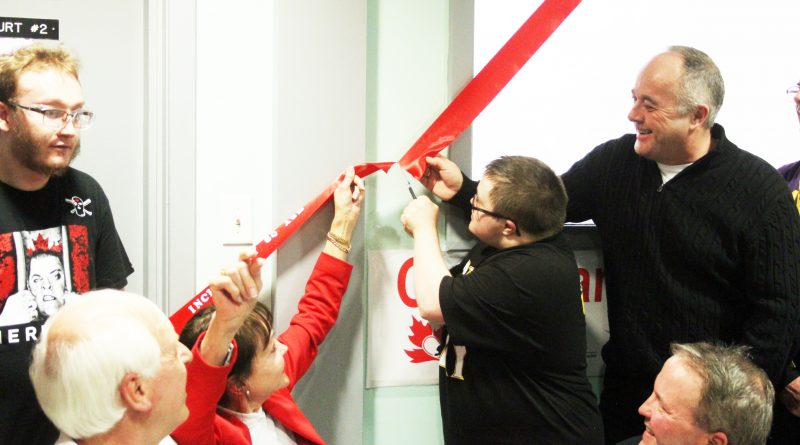 CBS became the first town in Canada to adopt an inclusive squash program, Monday, providing athletes with physical, emotional or intellectual disabilities an opportunity to play the sport. The formation of such a club, it turns out, is even rare globally.

The formation of the club was engineered by CBS resident Eric Hart, Squash NL’s former president, and a long-time coach of the sport. Hart also coaches and helps run an inclusive softball program. He served as host of a ribbon cutting ceremony at the club’s home base Monday, the CBS Swimming Pool & Recreation Complex.

To get the club started, Hart sought funding from the Government of Newfoundland’s Recreation division, the CBS Lions Club, and the CBS Kiwanis Club, whose donation is still pending. The Town of CBS agreed to provide the much in demand squash courts for a four-week free trial period. The program is also being supported by both Squash Canada and Squash NL.

Hart used the occasion of the grand opening to thank the sponsors who stepped up to make the program possible.

Conception Bay South MHA Barry Petten praised Hart for his efforts in getting the inclusive program off the ground.

“You’ve gone over and above the call of duty as a volunteer, and I just want to say thank you very much,” Petten said.

Lolly Gillan, Squash Canada’s International Delegate to the World Squash Federation (WSF) and Pan American Squash Federation, was also on hand. Gillan said she discovered squash when she was 17, a time when she was recovering from a major foot injury and didn’t think she would ever run again. Gillan would eventually become the President of Squash Canada. She helped put together the administrative side of Hart’s inclusive program.

“I reached out to Australia,” Gillan said. “And I reached out to Egypt, and I reached out to Germany, Belgium, England, I even reached out to the U.S.A. and they all said ‘We’ve thought about it (implementing an inclusive squash program), but we haven’t done a program.’ We are really pioneering here. This was the response I got from the World Squash Federation: ‘Lolly, squash has been voted the world’s healthiest sport, but in the future, we would also like to be considered one of the most inclusive.’”

When the ribbon was officially cut, it was one of the program’s first members, Luke Kennedy, who did the honours. And though there were just four members committed to the new program by the time of the ceremony, Hart and Gillan have extended lines to 19 disability organizations in the Coalition of Persons with Disabilities Newfoundland & Labrador network.
“Squash is a game for all,” Gillan said.