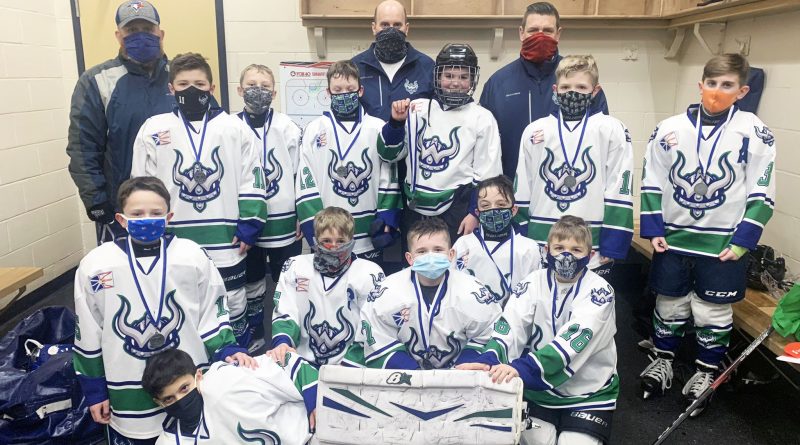 Getting suited up for a hockey game is no small task. From the skates to the helmet, to leggings and shoulder pads and socks and elbow pads, players are padded from head to toe. But it’s likely no one playing hockey a year ago would have anticipated that medical face masks would also become a part of the gear check list.

The cloth masks are just one of many COVID-19 guidelines that minor hockey players, coaches, and parents are following to ensure safety both on and off the ice. And it’s one that the provincial governing body, Hockey NL, takes pretty seriously.

“Hockey NL has actually instituted a rule that if a coach takes his face mask down they are subject to supplementary discipline,” said Paradise Minor Hockey President Greg Barton.

In Paradise, kids are arriving at the Double Ice Complex geared up, and leaving right after practice so as to cut back on time spent in the arena. There are limits on the number of folks allowed in the dressing room, which means for some teams, kids are having to put on their skates and helmets outside the locker room to maintain social distancing rules.

There are less kids and coaches on the ice, and teams don’t have as much ice time as last year due to scheduled half an hour cleaning breaks in between practices and games. There are also less spectators in the stands.

“We started out with a one spectator per kid limit, so it was limited to who could come and watch the kids. Now, we’re up to two spectators per kids, so even now when nan and pop are in town, they’re not allowed in,” said Barton.

There are also big changes to team’s weekly schedules.

“The biggest difference you’ll see is how the all-star teams are dealing with each other,” said Barton. “Normally, they would play two games a week, and have a practice or two a week. This year, they’re down to about one game a week and one practice a week because they’ve had to limit ice time. Our house leagues are the same: they’re playing one game a week and practicing every second week, so not every week. And the other difference that affected our house league is that our league is staying in Paradise, we’re not in the interlocking house league in metro. So typically, we play Mount Pearl, Avalon, Northeast, CBR, Southern Shore— we’ve stayed out of that, and stayed within in our own arena.”

Barton said that the restrictions are no doubt challenging, but were necessary to ensure a safe return to play.

“The most obvious consideration is the kid’s safety,” said Barton. “We obviously had to work with Hockey NL to make sure we were in compliance with their health and safety requirements, and work with the Town of Paradise to make sure we could get in and around the facility safely.”

The league wrote a return to play plan which they had to first submit to Hockey NL, and which they then used in discussions with the Town.

Despite the challenge posed by the many restrictions, Barton said that it was especially important to bring back hockey, in large part because of the restrictions.

“There were safety and financial considerations, but at the same time, because we were on lockdown, we realized that the kids needed some physical activity, so we did what we could to make it work for everybody,” he said.

“Kids weren’t in their regular routine, they weren’t seeing their friends, for the majority of last year they weren’t going to school. They were stuck inside and playing a lot of video games and staying at home and not getting to go and do the things that they’re used to doing. One of the biggest things about hockey, aside from the recreational benefits of being on the ice, is the social aspect of playing on a team.

“Anyone that’s grown up playing hockey, for say ten or fifteen years in the minor system usually ends up with a few lifelong friends out of it. I think that was one of the biggest aspects, the social aspect; getting them out of the house and interacting with their friends in an activity that they all seem to enjoy.”

Despite cuts to ice time and social distancing, registration numbers are handy well the same as in previous years.

‘We accommodate for every kid as is reasonably possible. So, in past years we’ve had n the neighbourhood of 700 to 725 kids registered. This year we have 700,” said Barton.

The restrictions have also impacted how the league holds fundraisers. Things like the annual Teddy Bear Toss, which typically draws as many as 300 people, had to be scrapped.

The Paradise Warriors were able to host a drop-off food bank donation at the arena.

Barton said that a reducing of restrictions in the future would depend on population herd immunity but, for now, he’s simply happy that kids are out on the ice.

As far as he knew, PEI and Newfoundland and Labrador are the only provinces playing full minor hockey.