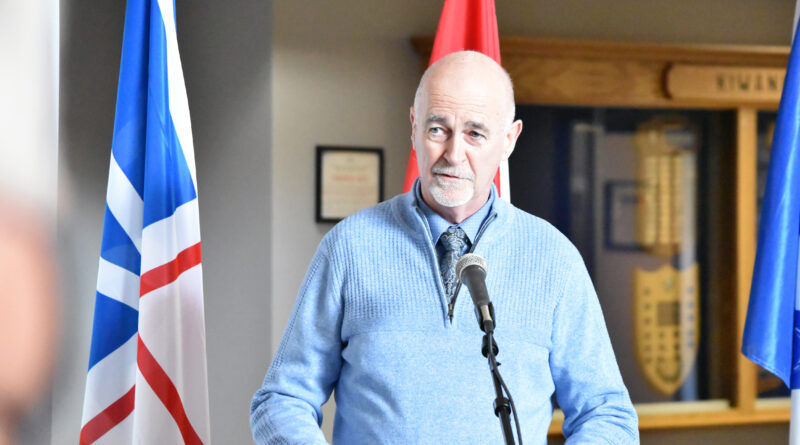 Ottawa, the Province and the Town of Carbonear are chipping in again to fund another phase of the downtown’s revitalization, meaning Water Street, from the intersection of Bannerman Street  to the corner of PF Finn Street will see new sidewalks, signage, murals, benches, lighting and other amenities.

Phase 1 of Water Street’s refurbishment was announced in 2018 and completed in 2020. It focused on what the three governments dubbed the Carbonear Row Cultural Quarter. That’s the area from the Railway Museum to the corner of Bannerman Street.

Friday’s press conference in the Town Hall foyer to announce the funding marked the first in-person press conference held in the town since the outbreak of the coronavirus pandemic two years ago.

“On the Avalon we are blessed with incredible cultural and historic sites and beautiful coastlines and unique tourism experiences,” said Avalon MP Ken McDonald, who spoke for the federal government.  It’s our job to ensure the history and beauty throughout rural Newfoundland and Labrador is preserved and developed in a way that benefits our communities and our residents… This investment will support development of the local tourism industry by revitalizing downtown Carbonear and helping to accelerate economic growth in the Avalon region. The funding will be used for phase two of a three phased project, so I guess I’ll be back again sometime before too long.”

That last comment drew appreciative laughter from the other politicians and staff in attendance and sparked Carbonear’s economic development and tourism director, Kerri Abbott, to tell McDonald she was making a note of that commitment.

“This project will help the community of Carbonear create an enjoyable, enticing downtown space for residents, visitors and local businesses alike,” McDonald said. “This is terrific news for the whole region.”

The MP explained the funding is part of Ottawa’s effort to support growth of the tourism industry and regional economic development.

“Over the last two years, the communities here on the Avalon have shown tremendous resilience and determination,” McDonald said. “Helping municipalities and organizations with projects like this one is an important step that will accelerate the recovery effort and boost future growth in our communities… I wish you lots of success with phase two of your project and I look forward to hearing about phase three.”

Steve Crocker, the province’s Minister of Tourism and the member for Carbonear-Trinity Bay de Verde, noted the Province’s share is coming from the provincial Department of Industry, Energy and Technology.

“Carbonear is the hub of business and tourism in the region,” said Crocker. “And you can see that in the many successes around this town. A few years back both the federal and provincial governments invested in a revitalization project in the Carbonear downtown, and I think we’ve all seen and can all attest that this investment in the early stages of the heritage district has brought new business, has brought expansion and renovations and has been very worthwhile.”

“Now is the time to build on this rewarding activity in the downtown core and enhance the offerings here in Carbonear,” he said.

Crocker singled out the efforts of Ernie Pynn, a long-time economic development officer with the provincial government, for all his work over the years in working on projects such as this one.

“The goal of this project is a simple one – to increase and improve the traffic flow in the downtown area and to help attract even more visitors to this historic community,” Crocker added.

The new signage and other fixtures will make the Town even more welcoming to visitors, he said, and enhance its arts and cultural attractions. “When completed, this project will also improve tourism offerings not only in Carbonear but on the entire Baccalieu Trail Coastal Drive and will be beneficial to the region as a whole,” said Crocker.

Crocker said the province is looking forward to increased tourism this year associated with Come Home Year. Reservations on Marine Atlantic for this summer are already up almost 170 per cent over pre-pandemic numbers, he pointed out. During a conversation with a representative of Swoop Airlines earlier that morning, Crocker added, he learned that its bookings are already exceeding what it had forecast for the new service. “When I leave here this morning, I have a call with Air Canada, and I’m expecting good news from them as well.”

Crocker thanked the council and staff of the Town of Carbonear for all their work on the project, which he reckoned makes funding for phase three “a given.”

The final speaker at the event, Mayor Frank Butt, quipped that given the date of the announcement (April 1), he made sure to doublecheck it wasn’t an April’s Fool joke.

Butt said the funding news is the latest in a series of positive developments in Carbonear, including the expansion of the Princess Sheila NaGeira Theatre and the start of five new businesses this year alone, including two downtown.

“I think we can all agree that the last two years upended many lives and many plans,” Butt said. “We are hopeful in moving forward to create momentum and growth. Transforming our downtown into a vibrant downtown district has been and continues to be the priority of the Town of Carbonear. A revitalized downtown district is good for the town as we have seen, despite the global pandemic, to increase visitors to the town to see and walk through the area in completed phase one, while also shopping and visiting businesses and attractions in all of our town and surrounding areas.”

Butt said, everyone is eager to see work start on phase two.

“We are anticipating shovels in the ground by the third week of June,” said the mayor. “Everyone in this room and beyond have invested their time to make today’s announcement possible, to revitalize the downtown and support the business community. Now is the time to get our work done.”

The mayor praised Abbott for being so persistent about pushing this project, and others, forward. “If you think your Monday morning telephone calls (from her) are going to stop, they will not,” he said, smiling. “We have several projects in the making and I’m sure your telephones will be ringing and Kerri will be on one end.”

Butt encouraged all the visitors on hand to check out the downtown while they were in town. “Good things are happening in Carbonear,” he concluded.