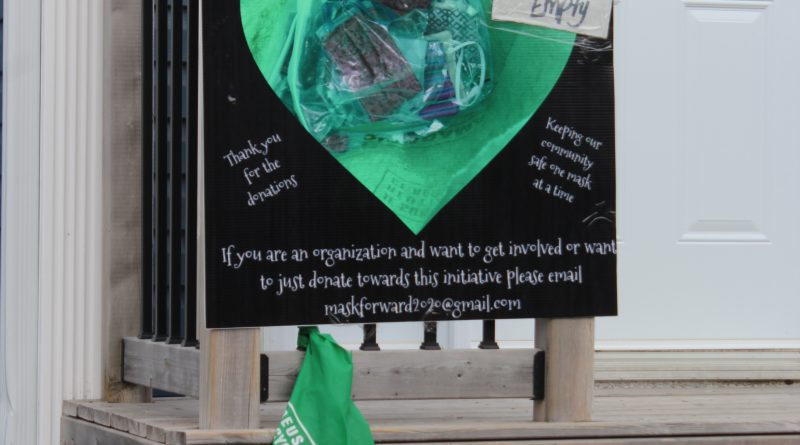 Some quilters in and around Conception Bay South are trying to give back in this troubling time.

While many people in the province find themselves with a lot more spare time on their hands, there are others who fall into the category of ‘essential worker,’ meaning they not only have to go to work during this pandemic, but put themselves at risk for the betterment of society. To help reduce the risk of coming into contact with COVID-19, people are being encouraged to wear masks and gloves.

That practice is making masks increasingly difficult to find, but with the help of people like the Mask Bandits, essential workers need not worry about whether or not their local shopping centres have run out.

The Mask Bandits have been in operation for about a month, and aim to provide masks for anyone who needs it at no cost.

It was Jo-Lynn Butt who initially started the group on facebook. She explained that her sister is an essential worker, but also has asthma. So, Butt took to the internet to learn how the masks are made, and possibly lend a helping hand to her sister who had been off work for about a year trying to regulate her asthma prior to getting back into the work force.

As it turns out, making masks like these is not an overly difficult task, especially for someone who has experience in quilting like Butt does.

“I saw videos and got to see how they make these masks. I said, well, we could do some of these. People are financially strapped these days, so why don’t we try and make some for those who need it?” said Butt, who reached out to her quilter friends to help.

“We’re not only going to get people from CBS, or Paradise, or those places nearby. People are going to need these all over the province,” she said.

Before long, the quilters were busy getting to work, each of them using their homes as a base of operations. Within the following weeks, the Mask Bandits had made 150 masks for the RNC, 25 for a local funeral home, 30 for Villanova Pharmacy, 40 for Admiral’s Coast … and the requests kept coming.

Butt noted that that’s what they were – requests. Since she was not interested in charging money for the masks, Butt did not refer to them as orders, despite the sheer numbers she and the group are seeing.

In fact, Butt and the other mask makers are so adamant about doing this for free, that even if they do receive money as a donation, they pass it along to Quilter’s Quest in Torbay, where they get their supplies.

Butt noted one family in CBS recently donated $200 to the Mask Bandits’ efforts, alongside some other donations thy have received.

“We started doing this as a group, and by creating the Mask Bandits, we were hoping that we could get other people to do it in other areas,” said Butt. “Now, there’s a lot of people on that group.”

Given the success of the initiative, Butt even began leaving a bag out on her front step filled with masks that people could come and take as they please. That idea too has taken off, and some other people within the Mask bandits group have picked it up creating what they refer to as the MaskForward initiative. On the bag is an email address which people can use to donate to Quilter’s Quest, if they feel so inclined to make a monetary donation.

The bag is usually filled with as many masks as the ladies can manage to make. Still, Butt said it tends to take only about an hour before the bag goes from around 15 masks to none.

To that, other quilters have come in to lend a hand by keeping the MaskForward bags as full as possible.

“I’ve had ladies from some of the quilting guilds that we’re not even a part of – I’ve met at least four so far – who come by to drop off masks that they’ve made,” Butt said. “Usually, every day someone will drop off maybe 10 or 15. This is just a bunch of ladies who want to do something good and give back.”

Although the exact number of people making and giving out the masks has fluctuated over the weeks, Butt said the group will continue doing what they’re doing for as long as they need to.

“People are so appreciative,” she said. “It’s something that takes a lot of people to make work, but we’ve managed so far. We make a great team … we’re a small team, but I know there are people all over the province doing this. As long as there’s someone out there trying to give back and keep everyone safe, then that’s the main thing. That’s why we’re doing it.”