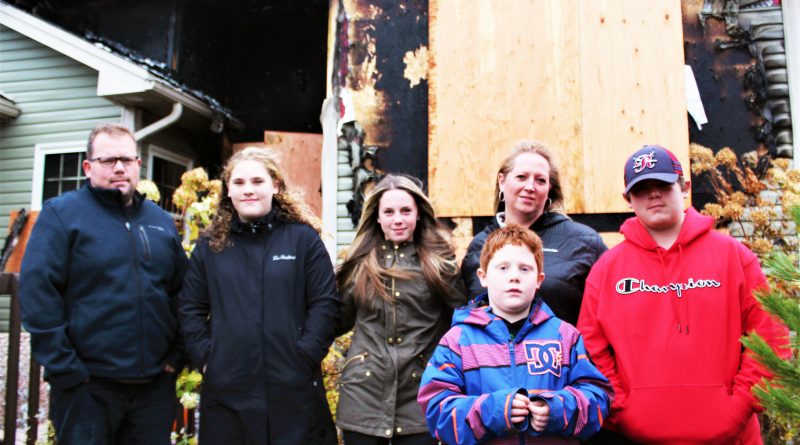 A CBS family is grateful for the generosity of their community.

On Tuesday night, October 15, the Reeves family of Greeleytown Road had their lives changed forever. Their family home, in which they had lived for over a decade, burned down. It left them with nothing but the clothes on their backs.

Since then, the Reeves have been living with relatives next door, the remnants of their home always close by serving as a reminder of how quickly things can change.

Sherry Reeves, mother of four, said the fire got out of control in nearly a blink of an eye, and the speed at which their house became a prison of flames was one of the most frightening aspects of it, looking back.

Her son had just arrived home from hockey. She, her two daughters, and seven-year-old son were asleep, while father Craig was getting ready to relax and help with some late-night homework.

Moments later, her son noticed smoke and ran upstairs to alert everyone.

“I had no doubt the house was on fire, because at that point the fire alarm was going off,” said Sherry. “But, it took me a couple minutes to register it.

At that point, Craig went to flick a bucket of water on it, and I went to the kitchen to grab the fire extinguishers. I met him on the landing, but Craig told me to just get out – the house was totally ablaze. We couldn’t do anything.”

When they got out on the deck, it took some time to regroup. One of her sons, Matthew, even braved the smoke and fire to help his sister Jennifer escape.

Unfortunately, not every member of the family was able to make it out; Bailey the dog was stuck inside.

“We got out, and we were looking for our dog. But, just as quick as that, we couldn’t get back in … two runs down five sets of stairs, and that was it,” said Sherry. “The rec room window was all ablaze, there was glass shooting out of the windows everywhere. Our whole house was consumed.”

In the chaos, Sherry’s son Matthew had thought he had seen Bailey run toward the kitchen area, and the family assumed Bailey may have been hiding beneath a table. However, as soon as they opened the back door, the family was met with a wall of black smoke, confirming to them that whatever was left inside the house was inaccessible.

“We were screaming out to the dog, and I even tried to take a step into the kitchen, but I couldn’t even make it that far through the fire … we had to accept that Bailey was in there,” Sherry said, adding that one of the most heartbreaking moments of the night was when the fire department found Bailey, and laid him on the driveway.

The cause of the fire is still under investigation.

Despite the circumstances, the fire has reminded the Reeves that there is still good in the world, and that there is plenty of it right at home in CBS.

Only moments after the fire was put under control, the Reeves were introduced to their first bout of kindness when neighbours began rushing out of their homes with shoes and clothes to keep the family members warm and safe in the cold October night.

“The young guy across the road even took the shoes right off his own feet and gave them to Matt,” she said. “People knew we had nothing, and they were running home to try and give us whatever they could – toothbrushes, clothes, whatever.”

Sherry said the community has been nothing short of supportive and kind. There have been clothes drives and a myriad of other efforts to help her family.

“There had to be about 140 garbage bags full of clothes that people dropped off to us, and there were so many people coming with food and other donations,” Sherry said. “Even the kids’ sports teams – they came in with new sneakers for them, new hockey equipment for Matthew and Mark. Our employers had fundraisers, and so did the girls’ dance studios. We had nothing, and it’s all helped us out so much in taking over mom’s house.”

It is that kindness and compassion that Sherry said will remain dear to the family’s hearts forever, and even served as a means of reminding their children that, even in the face of something as tragic as a house fire, it is important to keep a positive mindset.

“Every single act of kindness became a life lesson for our children and will forever be etched in our hearts,” she said. “With every donation, from household items to monetary gifts, they learned what selflessness looks like.

You’ve helped us to stand firmly back on our feet and continue on so that our children could regain a sense of normalcy, that they could go to school and sporting events. To our community, churches, schools, to our family and friends, our employers, local organizations, businesses, sporting groups, and our heroes, the fire department, thank you, thank you, thank you.”

Moving forward, the house will be knocked down within the next week, and the Reeves will begin the process of rebuilding their family home from the ground up.