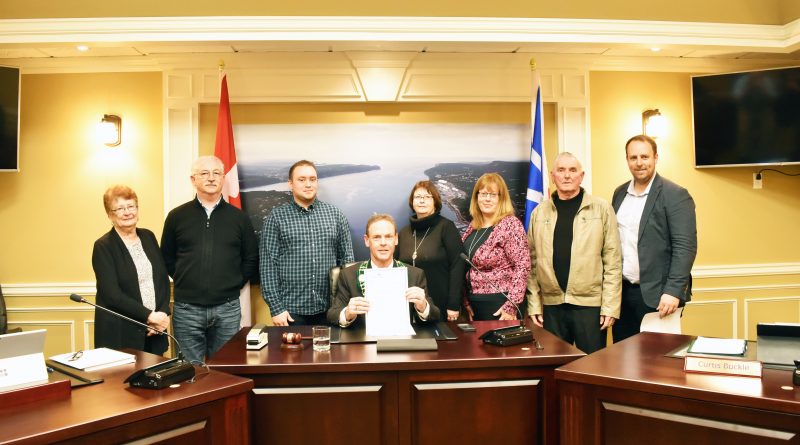 Holyrood council welcomed the chairman and members of its 50th Anniversary Come Home Year Committee to the council chamber last week for a formal introduction. Afterwards, Mayor Gary Goobie pressed the Town’s seal on a proclamation announcing the event.

“On behalf of council I want to thank you so much for stepping forward, getting involved and being part of this committee, which will certainly see us have a very exciting and memorable and historical year here in the community,” Goobie told the committee members who are headed by former councillor Gus Hawco.

“Our 50th anniversary is going to be a very historical occasion in the community,” said Goobie. “It’s not every day a community gets to celebrate 50 years (of incorporation). And we’re going to do it in Holyrood style. We’re going to bring forward the Holyrood spirit and we hope to get as many individuals and volunteers involved throughout the whole festivities, which will span throughout the entire year.”

Goobie said many of the activities will be held during the annual summer Squidfest festival. “And we certainly expect from what we’re hearing to see many former residents returning to the community to share, participate and celebrate this monumental event… Of course, there are children who have been born away who probably haven’t been to our community and so I’m sure that they’re going to be really excited to come back to Holyrood where their parents were born and they have relatives and friends. So, there’s going to be a lot of special moments shared throughout the 50th anniversary and the Come Home Year celebrations and we’re certainly excited about it.”

In the proclamation, Goobie noted that Holyrood, which sits at the head of Conception Bay, has a long maritime history dating back to its settlement in 1689. The community became important as a source of bait for the fishing fleets working on the Grand Banks. Goobie said the economy of the area changed in the 1880s with the arrival of the Newfoundland Railway. Holyrood is also the site of a number of firsts, Goobie added, including being the site of the first cold storage facility for the fisheries in 1932, the home of Newfoundland’s first and only rubber plant, in 1954, and Atlantic Canada’s first refinery, in 1961.

The first moves toward self-government came in 1962 with the appointment of the Holyrood Local Improvement Trustee board. A second board was appointed four years later. Those were the precursors to municipal incorporation in 1969.

Councillor Ghaney said a number of Come Home Year events will be launched during the Crystal Carnival. “If hard work has anything to do with it, it’s going to be a great year,” she said, thanking the organizers.