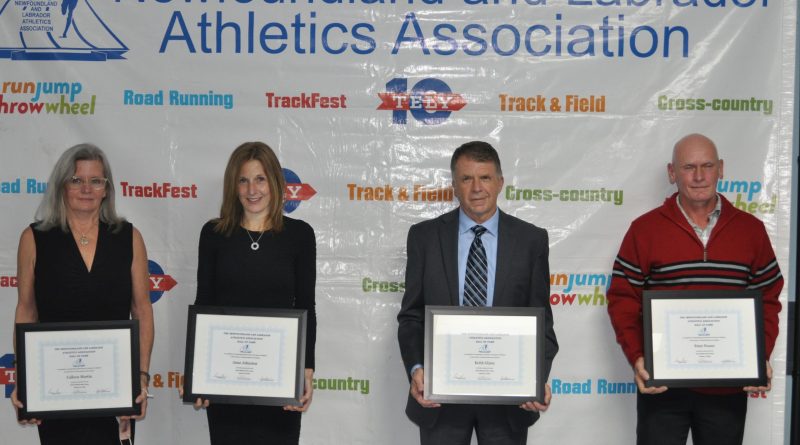 One of the founders of the Paradise Running Club, Keith Glynn, has been inducted into the Athletics Hall of Fame, along with Paradise long distance runner Peter Power and Colleen Martin-Ward, one of the province’s pre-eminent runners, who lives in Conception Bay South.

Cross-country star Anne Barrington-Johnston of St. John’s was also inducted during a ceremony held October 13 at the Pearlgate Track and Field Complex in Mount Pearl. Glynn was inducted in the Builder category, while the other three were inducted as athletes.

Inductions to the Athletics Hall of Fame were first held in 2005 and then annually until 2014, since which the ceremony has been held every second year. Last year’s induction ceremony was postponed until this autumn because of the COVID pandemic. Initially six members were inducted each year with the exception of 2008 when 23 individuals were recognized. Since 2012, the Hall of Fame Constitution calls for four individuals to be presented each year, one in the Builder category and three in the Athletic category.

This year’s additions to the 16-year-old Hall of Fame brings the number of individuals recognized for achievements and contributions to the sport of athletics in the province to 85.

Glynn was instrumental in founding the Paradise Running Club in 2009, and has spent countless hours devoted to the club over the past 12 years, said Hall of Fame spokesperson Joe Ryan.

“He has served as Vice-President and President of the Club a number of times as well as developing a Learn-to-Run program for the club in 2010,” Ryan noted. “He has indeed been a leader there for many years, inspiring and encouraging others to become involved as group leaders for the Learn-to-Run program. He continues to be an integral member and leader of this now well-known club.”

Ryan describer Power as a gifted athlete who has enjoyed a truly outstanding running career.

“But it has been in his later years that he has recorded some remarkable racing times,” Ryan noted. “He has competed over the years in international, national and provincial road racing events. In 2005 he placed 12th overall and 1st in the master’s category in the Detroit Free Press Marathon.”

Martin-Ward, meanwhile, who is originally from Trepassey, was a tremendous athlete in the province during her competitive years dating back to the early 1970’s, right from her high-school days to university and beyond, said Ryan.

“She was one of the very first female athletes to compete in athletics in Newfoundland, paving the way for others to follow. She dominated the road racing scene all through the 1970’s and early 80’s, winning numerous races and setting new provincial records in many of those events,” said Ryan.

“In the late 1970’s and early 1980’s she won a series of road races including among others, the competitive Harbor Front 10 km, the Northern Bay Road Race, the CHCM 10 mile and the Provincial 10 km Road Race Championships, and in so doing, inspired other young female athletes to participate in athletics,” Ryan said.

“I would like to thank the people and Town of Trepassey on my behalf for all the support they gave me during that time,” said Martin-Ward. “I truly am grateful.”