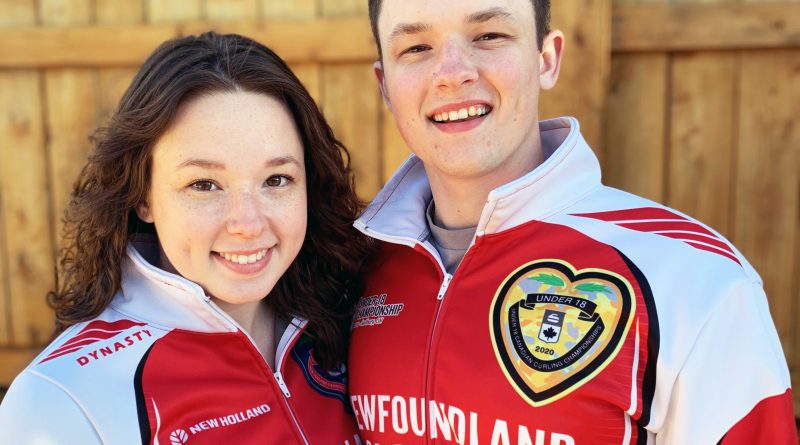 After over two decades of combined curling competition, Sam, 18, and Katie, 20, Follett of Paradise have competed at many events over the years, but the pair say an invitation to compete in the one-time World Juniors Qualifier in Saskatoon this coming November is the first time their schedules have synched so perfectly.

“When I would win provincials, he would lose, or when he won the Canada Games qualifier, I lost the final, so we’ve never been able to synch it,” said Katie. “So, it’s very exciting to be chosen for the same events. Our parents are thrilled that they don’t have to leave one of us home, so it’s definitely unique,” she laughed.

It’s also likely that it’s the first time a brother and sister from the province will attend the same World Qualifier.

Katie started curling in the St. John’s Curling Club RE/MAX Centre Saturday morning family program when she was just 7. Sam started when he was 5 after watching his sister curl. “I was always a fan of doing whatever she did,” he joked.

Like many competitive athletes, curlers have faced unique challenges in light of COVID-19.

Rather than having teams compete in a series of tournaments, member associations chose two teams, one team per gender, to compete at the Junior Qualifier event.

Katie said being chosen by the association carries a special sense of pride, as it means the team’s hard work and dedication has been recognized.

Both siblings play the mate position, and both siblings share an obvious passion for the game.

Sam noted the camaraderie with fellow players is perhaps what he loves most about curling.

Katie added the sport is challenging not just physically, but mentally.

“The sport in general is really unique,” she said. “It wouldn’t be uncommon for my teammates and I to look at one another and say, ‘We play such a weird sport.’ You can try as hard as you like, you can have the best technique, you can have the best strategy, but you can still lose a game. It’s different every time. It’s different every single time you get on the ice. Every ice surface is different, rocks are different, paths are different. It’s not only an athletic sport, but it’s also really challenging mentally. You have too always be in it.”

Both siblings now also coach at the same curling club they got their start in so many years ago, and encourage anybody who is interested to give the sport a try.

“It’s a fantastic opportunity to make friends, to develop your motor skills, to develop confidence, to be able to call your own game, to throw your own weight, because you’ll never see two slides that are identical,” said Sam. “It’s the most individualistic team sport that you’ll ever see. So, it’s an opportunity for anyone who wants to try something different.”

The pair also threw a bouquet to their parents, coaching staff, and sponsors, who are helping cover the cost of the tournament, which is coming out of players’ pockets.

Teams which qualify in November will move ahead to the 2022 World Junior Championships in February.