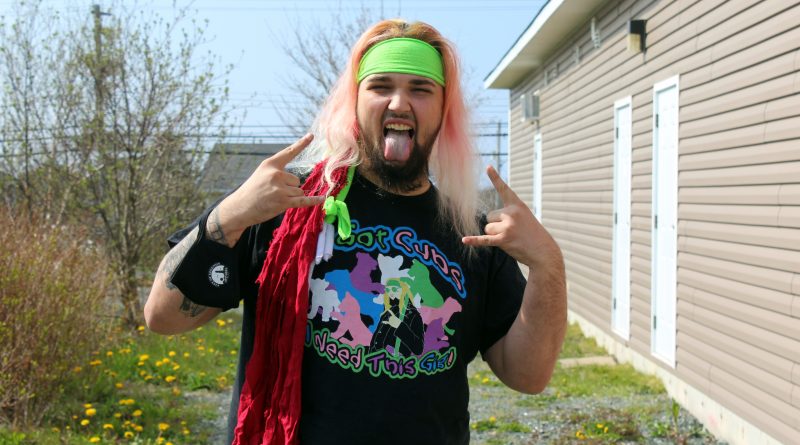 Neon coloured spandex may not be work apparel for most people, but for Cameron Stevens of Conception Bay South, it is, and he feels most comfortable when clad in it.

That’s because Stevens is a professional wrestler, an arena filled with personas just as colourful as the costumes they wear in the ring.

Stevens grew up admiring the skills he saw on the professional wrestling programs on television when he was child, eventually developing a deep passion for the sport. Wrestlers like Jeff Hardy and Canada’s own Edge are some of the athletes Stevens lists as some of his influences growing up, and the reason he has spent his life regarding the sport so fondly.

Although wrestling companies like the WWE – formerly the WWF – are not something every wrestling fan can aspire to participate in simply due to its size and popularity, Stevens is living proof that wrestling does not need to be isolated to a select few athletes.

Stevens wrestles as “The Steel Panther” with New Evolution Wrestling, or NEW.

The group dates back to 2015, and has a roster featuring some 15 wrestlers who represent all corners of the province.

Stevens said prior to pandemic restrictions, NEW’s shows would see an average of 500 people in the audience. He described the show as the best form of professional wrestling one can find in the province.

“I’ve been across the country and worked in a few different provinces,” he said. “New Evolution Wrestling is by far one of my favourites. Without a doubt.”

In June, NEW’s wrestlers will be hitting the ring again for two of their biggest events of the year: Year V on June 11 and Summercade 5 on June 12. Although the events normally draw a sizable crowd, this year will only see a portion of that due to pandemic restrictions. Stevens said tickets for both events are already sold out, and he and his fellow wrestlers are simply looking forward to putting on a good show for those who can make it.

He said NEW has some of the most dedicated fans he has seen when it comes to independent wrestling.

“I know that no matter what you’re talking about, people will say they have the best fans. I know that. But I really do mean it when I say that,” he said. “There’s been times where I’ve danced back to the locker room with fans … As far as I’m concerned, the more fun I’m having, the more fun the crowd is going to have, and if they’re entertained, I’m doing my job at the end of the day.”

Stevens’s wrestling attire features plenty of tassels and neon colours – both in his garb and in his hair – and said it is all a part of the fun persona his fans have come to know since he first stepped foot into a wrestling ring as “The Steel Panther.” All of these colours give off a welcoming and friendly aura, he said, which is exactly what he wants to portray. But Stevens said this is because being able to involve himself in the industry is one of the biggest reasons why he is around and still able to participate at all.

He described being a young child whose passion for professional wrestling isolated him from other kids, with the result that he was bullied for his interests, which impacted his mental health.

However, he saw wrestling as one of the biggest consistencies in his life and although he was understanding of the fact that becoming a pro is not in the cards for every fan out there, he has done what he could to make his lifelong dream a reality.

Now, he finds himself in a better place both mentally and physically, pursuing a goal he has had since being a child. Now he is a dad himself with two children with his wife whom he met at a NEW show.

Stevens even proposed to his wife in the middle of a show, bringing her on stage to ask for her hand in front of hundreds of cheering fans. It marked a departure from some earlier lows in his life.

“I was in a pretty bad head space,” he said, detailing his life before professional wrestling. “Thankfully, life has turned itself around. I’m here with NEW now, and I know there are so many things we can do and so many places we can go with this. That is just so exciting to me.”

The Steel Panther and a slew of other colourful – and maybe terrifying – faces will be performing again in June at the CLB Armory in St. John’s, where most of NEW’s shows take place. Although tickets have sold out, Stevens encourages folks to keep an eye out for updates on seating capacity changes for future shows.