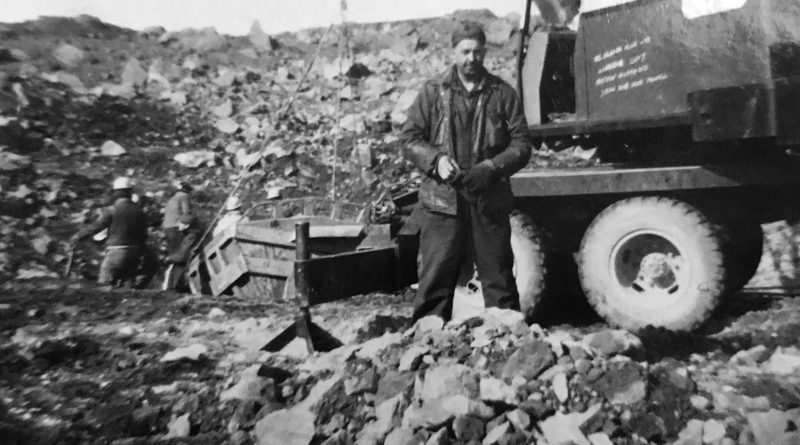 Those closest to Eric Taylor say he was always ready and willing to lend a helping hand, a trait which likely helped him build and retain the large clientele he served over the years.

“Pop was into helping people out,” said grandson Coady Greeley. “If someone got in a jam, at 10 or 11 o’clock at night with a sewer backup, he would go and look after it and say ‘That one’s on me.’ People remember how caring he was. He could be in the middle of a supper meal and say “I’ve got to go help someone.’ He was always just a phone call away, no matter what time of the day.”

Tim Greely, another grandson, concurred that Pop Taylor was a man who always took care of his customers.

“Pop always used to look after his customers,” said Tim. “He would say, ‘We’ll do it this way to save you some money.’ He always looked out for the customer’s best interest.”

Taylor passed away on April 14, surrounded by a loving family, at the age of 85.

The company he incorporated in 1979, Eric Taylor Excavating Ltd, remains a busy, family run operation and many of the clients Coady and Tim serve today are clients their grandfather served in years gone by.

Even before founding his own company, Taylor was working odd jobs with his single-axle dump truck, working evenings and weekends while also working another full-time job, and after retiring, he still helped out the family business as much as he could.

He was a man known for his work ethic and patience, and for his ability to remain calm and clear headed in stressful situations, and was well-known in the community.

“Everyone always talked about Pop,” said Coady. “Even when he was alive, I couldn’t go down to the store to get milk without people asking how he was.”

Though most in CBS knew him as a successful businessman, there were a privileged few who called Taylor family.

Both men remember many a time when their grandfather would admonish them to call him when they got home, so he would know they got home safely, even if home was within walking distance.

He had some other favorite sayings those close to him remember fondly.

“His famous words were, ‘Be careful,’ and ‘Thank-you,’” said Tim. “Every phone call, every conversation. Even if he was mad at us.”

Even when not working, Taylor always liked to be on the move. He hunted moose, volunteered with All-Saint’s Anglican Parish (for which he was awarded the Golden Jubilee Medal for his volunteer efforts, something he was very proud of) and often vacationed in Florida with his wife Edith, with whom he did most everything.

He was also an avid motorcycle enthusiast.

“He loved his motorcycle,” said Tim. “He’d be 80 years old and gone on the bike. And not just here on the shore. He’d go out to Bonavista.”

Those who knew him, whether as a businessman, a community man, or a family man, remember him fondly.