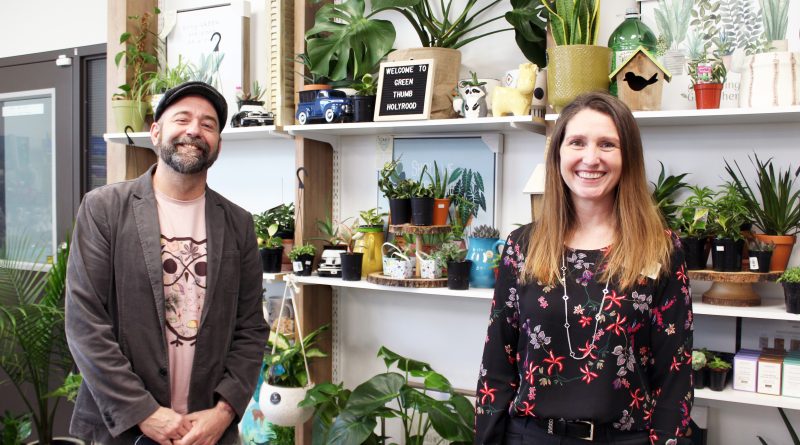 A pharmacy in Holyrood is expanding into uncharted territory with plants and art.

After more than a decade, the Medicine Cabinet recently moved to a new location near the roundabout.

Owner Julie Young says the new space offers the business an opportunity to take on some projects that she has long envisioned for the pharmacy.

Young said when she was growing up in Fogo, her parents’ pharmacy developed into a one-stop shop for everyone in the community to not just pick up their prescriptions, but any number of small things they might need without having to make a bunch of different stops or driving to another town.

As part of her own pharmacy’s growth, Young has invited Jay Lush of Green Thumb, a plant business, to set up shop on her premises.

Lush said Green Thumb was selling plants to buyers as far as Trinidad and Tobago, but he wanted to give his business more of a local presence. So he was on the lookout for space.

Green Thumb has been operating out of one side of Medicine Cabinet’s new building in Holyrood, and both Lush and Young say it has been nothing short of a beneficial partnership. It is the beginning of what they hope will one day become a one-stop-shop for a slew of local businesses offering products made in this province.

“On top of this, we’re in talks with artists who we hope to work with in the future to carry their product and give them a space like this as well,” Young said.

The two of them envision Medicine Cabinet as becoming something of an artist market, with products that appeal to anyone regardless of age, gender or sensibilities.

“We want this to be a destination where people can come in and see work done by people from all around our area. I never wanted to have just a pharmacy. Ever. When I expanded, I knew I needed something to keep the place interesting,” Young said.

“This location actually feeds into that idea quite well,” Lush added. “We’re in Holyrood, and when you’re around the bay it’s not that strange to go into a gas station to get your gas, but also a bit of food and whatever else you might need back at home. It’s very common to go into one store and come out with several different things – they’ve become almost like little department stores, and that’s similar to what we’re trying to do here. We just want to keep it 100 per cent local.”

Lush said about 90 per cent of his plants come from local sources, and they have already had people drive from as far as Clarenville and Gander to inspect the stock.

So far, they’ve had to restock six times in eight days.

“These plants have brought in a whole demographic that may have never come through the door before,” Lush said, describing a situation where a woman came in to get a prescription, saw Green Thumb, and came back with her husband who had been waiting in the car. “The art will do that, and so will for example some woodworking, or handmade crafts, and all the other things that people could bring in.”

Young and Lush are hoping their idea will be a showcase of local products that will draw people to Holyrood.

“And we want to be that destination,” Lush added.