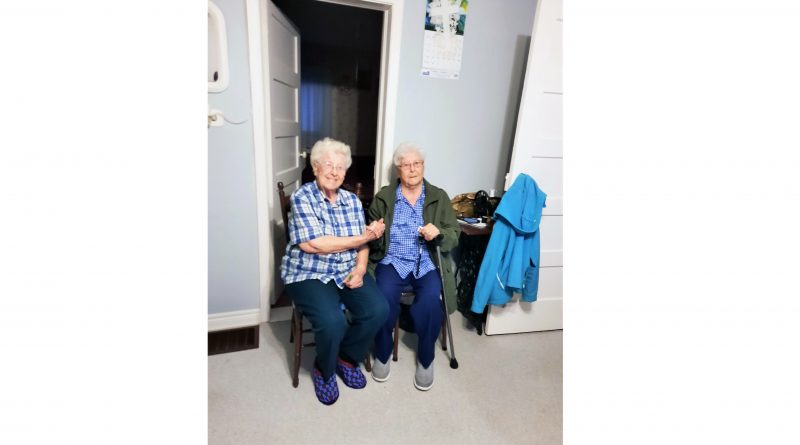 It’s a Happy 99th Birthday this week to twins Mabel Dawe and Alice Clarke who grew up in Paradise and spent their lives living on this side of Conception Bay.

The ladies, who are celebrating their shared milestone on Friday, were born in 1922, in a Newfoundland that would probably seem foreign to younger generations today.

Jacqueline Penney is Dawe’s granddaughter, and said she has been spending time with her grandmother on a daily basis for years now. The two live next door to each other in Conception Bay South, and so Penney has taken it upon herself to ensure her grandmother continues living as active and happy a life as she can.

Penney said the Janes sisters have plenty of stories to tell from a time before the popularization of things like electric heated homes, paved roads and daily commutes in a car.

Penney, recalling stories she has heard from Dawe over the years, said the sisters grew up in hard conditions compared to today, but always did what they could to make the best of things.

She described their family’s grocery list that the two would take to a local shop in Paradise. It was short, with only the bare essentials such as flour, yeast, baking powder, molasses and the like.

“That’s what you worked with, it’s what you made your meals with back then,” said Penney. “But they always had an abundance of fish.”

Even the school that Mabel and Alice attended as children were worlds different than the ones people are familiar with now. It consisted of a single classroom for all the different grades, with no such thing as a recess period.

“They’d get up in the morning and have their breakfast – a cup of tea and a slice of bread – and they’d go to school,” said Penney. “They wrote on slates with a slate pencil. No such thing as learning from books or taking home reading material in exercise books. That’s just the way they learned.”

Including Dawe and Clarke, their family was made up of 10 children. Penney said the twins used to make their own fun as young girls. In winter, like other Paradise children, they would slide down Paradise Hill and across Topsail Road towards Neil’s Pond. Their games were limited to things like hopscotch and skipping ropes – there were no malls or arcades, and Penney said the two worked for everything they had as soon as they turned old enough.

“They would pick berries and go to the Purity factory. They would get these small boxes or crates with lining, fill them up and sell them to Purity. They made a little bit of money that way, and whatever money they made went back to the family,” Penney said. “Their brothers would chop and bag up wood to sell, 10 cents a bag. From that, they would buy feed for the horses and really anything else that they needed.”

Hooking mats was also a favourite pass time of the twins. Using old clothes, Dawe and Clarke would spend plenty of time hooking rugs that would be used to keep the home warm from the bottom up. This came in especially handy during the winter season when they would take the rugs from the floor to cover up and keep warm throughout the nights.

“I remember even when I was growing up and I’d go out to Nan’s, she’d be there hooking mats. People don’t have those as much nowadays, but that’s what they did,” Penney said. “Their houses were covered in hooked mats.”

Even to this day, Dawe and Clarke are avid knitters, with Alice’s favourite thing to knit being gloves and mitts whereas Mabel focuses on socks and slippers. Penney said they exchange yarn when they can.

“It was such a different world,” Penney said. “When you hear them talk, you can almost picture it all in your head perfectly. All I can think is, my God, if half of us now had to go through all that, they’d just pack up and leave instead.”

Over the course of their 99-years, Dawe and Clarke have stuck it out as close to home as they could. Both of them married and although Dawe moved to Conception Bay South in the 1940s, Clarke stayed in Paradise. Nowadays they still live independently and, when pandemic restrictions allow, spend as much time together as they can.

“Even when they grew up and got married, they stayed close,” said Penney. “You know, people move on and create their own families, but they were always together for as long as I can remember … I don’t know if that’s maybe a twin thing, or maybe just because they grew up with such a tight family. They looked out for each other. That’s just the way it was back then.”

The hardships the women experienced growing up only tightened the bond between them, Penney added.

“They’re their own individuals and love to talk about the times long past. Times have really changed now for both of them, with COVID-19 on the go, it’s something completely brand new to both of them; something they’ve never experienced before,” Penney said. “But they’re always full of laughs either way. They’re really a joy to be around, especially when you can get the two of them together in a room: look out then!”

To celebrate, the ladies are getting together Friday evening for a supper and on Saturday they are having their hair done.