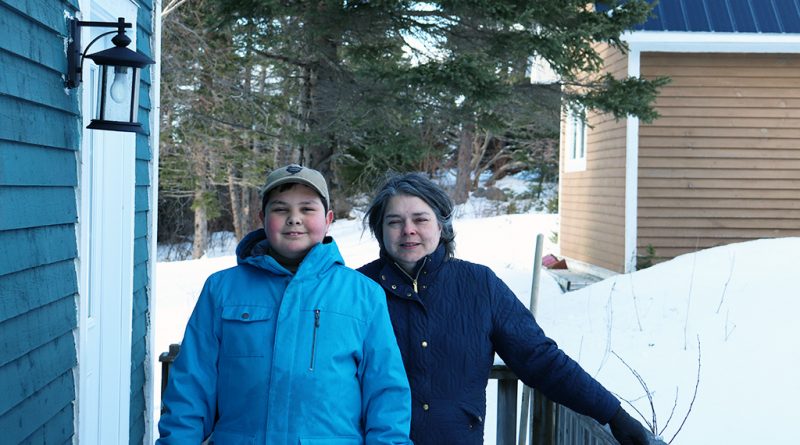 Better understanding and more acceptance of his condition are what Oliver Bougie of New Harbour, T.B., and his family are hoping for.

Easy going, 12-year-old Oliver has Tourette Syndrome and is used to the stares and comments he gets in public when he experiences a tic.

Tourette Syndrome is a neurodevelopmental condition that causes people to make involuntary sounds and movements called tics, which can be simple or complex. People with Tourette Syndrome have both motor and vocal tics.

Oliver compares Tourette Syndrome to being like an itch.

“It’s like if you have an itch and you got to scratch it and you can’t not scratch it,” said Oliver.

Tics vary from person to person and change in type, severity and frequency. Tourette Syndrome affects one in 100 people and coexists with other conditions such as ADHD, OCD and sensory disorders.

Oliver’s tics are usually complex. They include holding his breath, throat clearing, head jerking, back spasms, screaming and falling. Going out into public places can be a struggle for him. Any type of stimulation, either good or bad, can cause him to experience tics. One of the biggest challenges is how others around him react.

“When I do tics in public places, some people are nice to me, but sometimes people can be not understanding or just mean about it. I try to not let it get to me,” said Oliver.

A diagnosis doesn’t just affect the person, it affects a family. Dana Bougie, Oliver’s mom, said she has witnessed the misunderstanding and lack of education about Tourette Syndrome.

“I don’t find there’s enough education about what it is and how it affects the people who suffer from it,” said Dana. “I guess we are in a society where a lot of people see how things affect them and if a movement or sound makes them uncomfortable, they don’t deal with it.”

The family has had both good and bad experiences with Oliver’s tics in public places over the years. Dana recalls one time when the family went on an outing to a park. When Oliver was experiencing his tics another parent made rude comments about them. She took this opportunity to try and explain the condition to them.

“As a parent, it’s a learning curve and balancing act of when to speak up and advocate for him or when to just show him it’s okay to let it go and walk away, even though it can be upsetting,” said Dana.

Oliver was diagnosed at age eight. He first started showing vocal tics that escalated quickly. It was then that the family decided to home school him.

“In home school, we have the option of controlling the situation. We’re able to work around it and design his day around his Tourette Syndrome,” said Dana.

Mom has always considered herself an advocate for the syndrome and wants Oliver to know he is more than his disorder. “Oliver has Tourette, but Tourette is not him,” said Dana.

Oliver’s family has always approached his diagnosis with openness and encourages conversation for all to develop awareness. “If you don’t understand it, it’s okay to ask about it. We’re all learning,” said Dana.

Janet Rumsey, the Past President of Tourette Canada said the organization focuses on helping to educate the public and provide support to families.

Rumsey believes that there isn’t enough awareness of what the condition is.

It’s often assumed that Tourette Syndrome is the inability to control swearing, but in reality only one percent experience this type of vocal tic.

“We will be 45 years old this year in April, but so many don’t know we exist. We don’t have the same recognition as other organizations,” said Rumsey.

Tourette Syndrome is often misunderstood as a social disorder because some tics are not seen as socially acceptable.

“What we work on as an organization is to try and increase awareness amongst everybody, to show this is who the person is,” said Rumsey.

She believes that people who don’t understand it see the symptoms as a behavior of choice, though its victims can’t control it.

Oliver is hoping that organizations like Rumsey’s will help people understand him and others with Tourette Syndrome.

“I want people to be understanding, not sympathetic,” said Oliver.