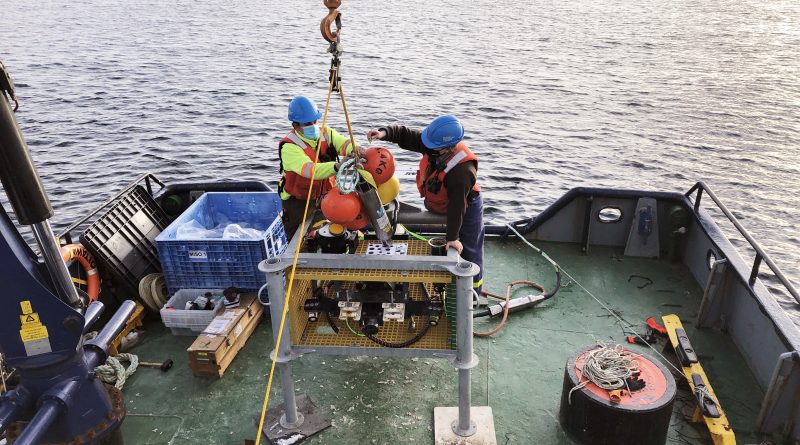 They say there’s nothing new under the sun, but what about under the sea?

Researchers at the Fisheries and Marine Institute, along with the University of Victoria’s Ocean Networks Canada (ONC) installed a seafloor observatory in Conception Bay last month to enable real-time monitoring of life under the sea.

“We’re going to monitor normal oceanographic conditions,” explained Paul Brett, Head of School of Ocean Technology at the Fisheries and Marine Institute of Memorial University. “So, that’s temperature, salinity — or, the salt content — what the currents are, what wave regimes are going on above it, we measure that and monitor that full-time, and you can see that data in real time.”

A high-resolution camera developed by SubC Imaging of Newfoundland and Labrador collects time-lapse video of nearby flora and fauna.

“The camera is set up to record five minute of data every hour, and that’s available for the public to view,” said Brett. “Sometimes there’s not much there, but you’ll see a snow crab or a toad crab or a star fish moving in and out of the video over time. So, we have some researchers looking at that, trying to understand what that whole habitat looks like and any changes that happen are part of their research.”

The video steam can be found on the ONC website.

Meanwhile, a fluorometer, which measures the amount of phytoplankton, is helpful to master’s student Rylan Command, who is using the observatory to characterize nearby seafloor marine life, such as snow crab, and to measure behavioural responses to the spring phytoplankton bloom in Conception Bay.

Brett said there’s a three-fold goal to the project; the development and testing of sensors to better monitor what happens in the ocean; long term monitoring of oceanic and biological conditions to record any changes or fluctuations from night to day and season to season; and, finally, public outreach.

“This is one of the big things that we want to be able to do, is to unlock some of the mysteries, not only for scientists, but for the public, about what it’s like under the sea,” said Brett.

The observatory, housed in an aluminum frame the size of a small car, can be found about four kilometres from the Marine Institute’s Holyrood base at the bottom of the bay, in a depth of about 85 metres, and sends real-time data via a seafloor, fibre-optic cable.

“We were looking for water depths in the 80 to 90 metre range,” said Brett. “That’s indicative to what most of the Grand Banks are from a relative depth perceptive. And if you think of all the things the Grand Banks have done for Newfoundland and Labrador, so oil and gas, the fishery, it’s all in that 80 to 100 metre range.”

Also, noted Brett, the closer to land the shorter that fibre optic cable running information back to shore would be, which means a cheaper bottom line.

Though the town isn’t a financial parent, Brett said it is very much a community partner.

“Our development, when it started in 2010, has been in consultation with the community, to understand that we fit in the community’s plans as well,” said Brett, adding the Town has supported the Marine Institute and often has a presence on the advisory board as the Institute moves forward with different initiatives.

Some residents have even come to rely on the Institute.

“We’ve had calls from the marina, when we’ve taken in our buoys for data, saying, ‘We need the data, we need to know if it’s nice out there for our boats,’” said Brett. “So, we want to be able to provide the information for the community as well because they’re a partner here. What we do needs to benefit the community as much as it benefits the institute.”

Brett said the more the Institute studies and understands Conception Bay, the more appealing the bay will become for potential investors, but the financial implications of oceanic research reach much further.

“From the blue economy piece, how do changes in oceanographic conditions affect things as valuable to the province as snow crab?” Brett posited. “Newfoundland and Labrador has a special connection to the ocean, and understanding the ocean is important to be able to benefit from living here. So, be it fisheries, be it oil and gas, marine renewable energy, marine tourism, the blue economy, which we’ll hear a lot about in the next 10 years for sure, is really what Newfoundland and Labrador is about. Understanding the ocean as an enabler of that economy is really what, not only Newfoundland, but globally, this next decade is about. 2021 to 2030 has been designated as the UN Decade of the Ocean.”

For all of the province’s reliance on oceanic enterprise, modern science has yet to plumb its greatest depths.

“We have mapped the surface of Mars and the surface of the moon better than we have the ocean,” said Brett. “That can be best illustrated by when we lost that aircraft down in the south pacific a number of years ago, the MH 370. They were searching for it, and mountains were found where we didn’t know mountains existed, because we haven’t mapped the deep ocean. The technology is only just getting there to be able to do some of that.”

Meanwhile, the Holyrood seafloor observatory is expected to be a permanent installation, brought to the service occasionally for maintenance.

So far, Brett said, there have been no sightings of yellow submarines in Conception Bay.