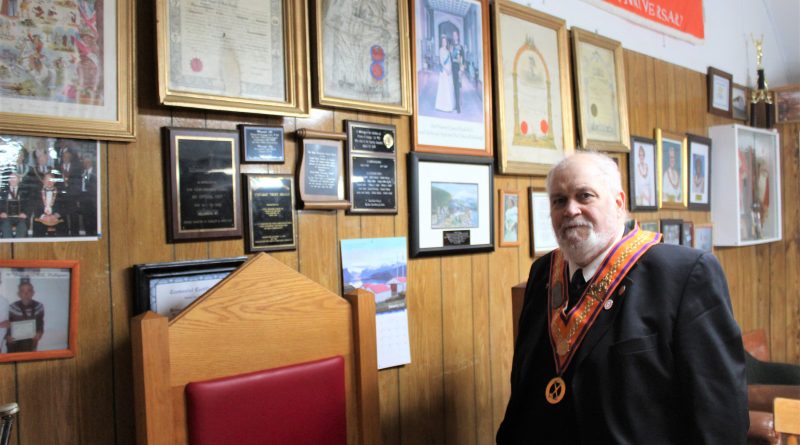 Once a dominant force in Newfoundland society and at times even politics in the past, Loyal Orange Lodges can still be found in many communities across the province.

Under normal circumstances, Lodge members in Kelligrews would have spent Thursday, March 11 together celebrating 145-years of Orangeism in the community. Due to the global COVID-19 pandemic, they had to hold off on their celebrations.

The Orangemen’s presence in Newfoundland can be traced back to 1873. In the early to mid-1900s, some 35 per cent of Protestant men in the province were Orangemen – significantly higher than Northern Ireland’s 20 per cent during the same period.

Worshipful Master of the local Lodge, Don Smith, who has been involved with the organization for some 16-years, said the continued existence of Orange Lodges can be a great benefit to any community.

He described the lodges of modern day as benevolent fraternal organizations, allowing that what the organization is now and what it was many years ago are not one and the same.

“Back when the Orange Lodge was started, we were the social safety net for our members,” Smith explained, describing how the organization looked after its members and their families on a personal level when someone was ill, and suffering a tragedy. That could mean something as simple, but vital, as a load of wood to heat someone’s home.

That informal kind of social safety net still exists, said Smith, it just looks different than it did back in those days.

“Looking after our own became looking after the entire community in general,” Smith said, describing the various community fundraising and donations the organization makes each year including towards the Janeway and Daffodil Place.

More locally, the Loyal Orange Lodge raised funds to help support the creation of the monument of honour in front of the CBS Town Hall, among other good works.

“A couple of years ago, there was a house that burned down in Topsail … We ended up giving (the woman who lived there) a cheque to help re-establish her life after receiving a letter asking for help,” Smith said.

It was back in 1876 that the original Lodge in Middle Bight was established and its members received their degrees and initiations. While membership has declined in recent generations, the remaining members are proud of the organization they represent, and of the Lodge’s rich history.

During the 140th anniversary celebrations, Smith presented a 20-minute speech detailing the history of the Lodge. He said the exact origins of how the Lodge was brought to Middle Bight are lost to time, but records show the dedication of the Orangemen in Newfoundland in the late 1800s was just as strong as it is today.

He described the men of the time walking the distance from Middle Bight to Portugal Cove in order to attend meetings before building a lodge of their own in 1876.

Within the next 10-years or so, membership grew to just under 200 people. This rapidly increasing interest ultimately led to more Orange Lodges popping up in nearby communities to serve those who had been walking long distances to attend meetings in Middle Bight

“By the end of 1920, there had been 463 men initiated and to date there have been more than 600 members pass through the doors of Prince of Orange #23, becoming brothers of the Orange Society,” Smith said.

He noted that at one point, the Middle Bight Lodge had one of the highest membership numbers in the province.

This year, like many things, the Orangemen’s general operations have had to be put on hold. Smith described anniversary celebrations of the past, where members, their friends and family would all gather together for a night of good food and companionship, with speeches from notable members, local dignitaries and the like.

While the 145th anniversary of the Lodge was marked on March 11th, Smith said he doubts they will be getting together for such a celebration any time soon, and is anticipating an exciting get-together in five years’ time for the 150th anniversary.

“The lodge today is not your father’s or grandfather’s lodge,” said Smith. “We have evolved …  Although the membership of Prince of Orange is only a shadow of its former self, the dedication of its members today is as strong as it’s ever been.”