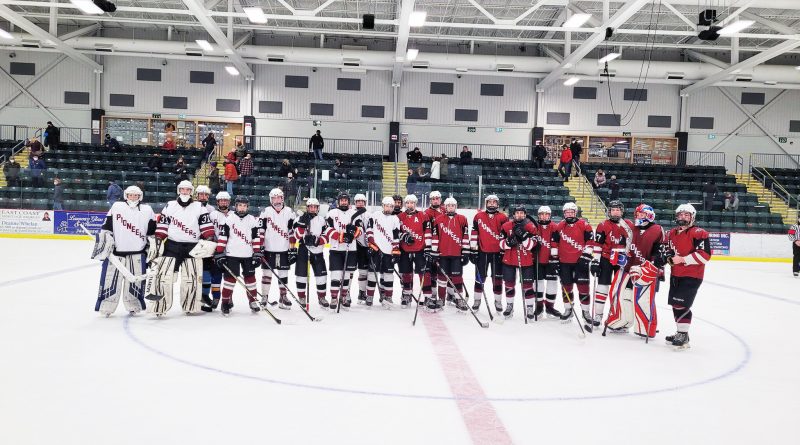 Students, teachers and coaches at Queen Elizabeth Regional High had to pivot this year and figure out a different way to raise the funds and gifts the school normally gathers for local charities.

The students usually hold a number of fundraisers and food drives throughout the school year, but with the world still trying to stamp out Covid-19, this year was different.

However, as the first half of the school year came to an end, the players on the boys hockey team found a way around the problem. The result was an inter-squad game held at the CBS Arena which served as a food and Christmas toy drive.

Coach Jeff Fagan explained that due to COVID-19 restrictions, hockey teams at some schools have been broken down into two teams of 11 players each to enhance social distancing and the protection of respective group bubbles. Sometimes, this results in teams from the same school playing against one another.

That is what happened on Sunday, Dec. 6. So, Fagan and the boys took advantage of the situation given the fact that it would likely never happen again. Calling it a “Covid game,” the teams used that night to host their annual Christmas toy drive, as well as a food drive, which saw contributions from both the families of the teams, and staff from the school.

With regulations stating that only 100 people were allowed inside the arena at a time, it did not open up an opportunity for residents to drop by with food. Fagan said that once they factored in the players, staff, and families coming to watch, they reached capacity pretty quickly.

Still, Fagan considered the drive a success. In a normal year, Fagan said, the team would host a couple of food drives throughout the season, such as during the annual SHIELD games. The annual toy drive, as well, has been an ongoing effort for the last four years.

“It’s been really successful, and even this year we did pretty good even though it was on the backs of our own (players only),” Fagan said.

In a regular year, the games attract some 200 to 300 fans, especially when they go up against Holy Spirit High School.

“We’ve got a contact at the Janeway Children’s Hospital, and we drop (the toys) off there,” Fagan said. “They use some of it for Christmas gifts, but they actually keep it all to hold onto all year. For example, if there’s a kid going through surgery, they’ll always have a toy on hand in storage that they can use to cheer him up.”

Although he didn’t have exact numbers on the result of the drives held that night, Fagan said it was enough to fill up an entire pickup truck – not all that much less than a normal year’s drive, where they may fill two trucks.

“It wasn’t too different than a regular year, really. It just comes down to numbers: there were less people because we couldn’t get so many into the building. But that was more a factor of Covid, rather than anything else,” Fagan said.

The game itself proved to be an exciting match as well. QE 1 and QE 2, as the teams were called, were locked into a 2-2 tie for most of the game. It was not until the last 20 seconds that QE 1 scored a third goal, securing the win.

“With COVID around, it was pretty different, but overall it was still a pretty good night,” Fagan said.