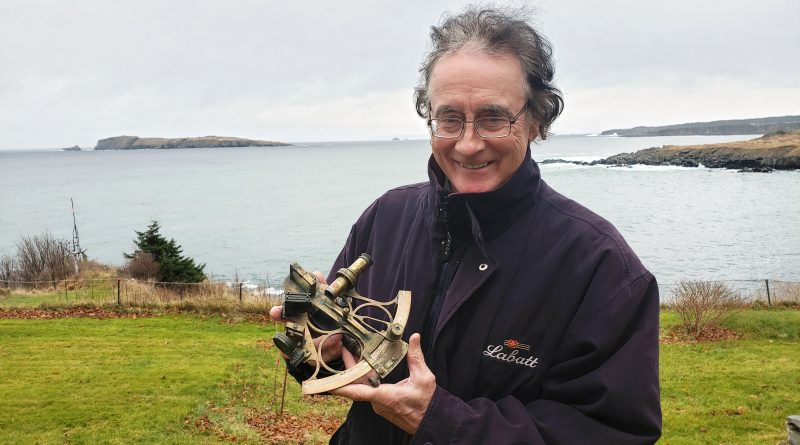 Capt. Guy Earle is a well-known name to Carbonear’s history buffs, and his son has a lot to say about it.

Phil Earle, who has long admired the deeds of his late father, has just released a book chronicling some of the more story-worthy moments in the late seafarer’s life, which made him a household name in much of Conception Bay North.

Capt. Earle passed away in 1968 leaving a colourful history as an energetic player in Newfoundland’s seafaring and fishing past. His adventurous career took him all over the world and led to the establishment of a large commercial enterprise in Carbonear itself, which was closely tied to the Labrador fishery and the salt fish trade.

Earle’s name carried weight, especially in Carbonear, and so the task of putting those tales into print, was a serious one for his son, who describes himself as a storyteller, but not necessarily a writer.

It took Earle, the son, a couple of years to compile the set of stories about his father, under the title, “I’ll go the length of meself,” a phrase not only often used by his dad, but one that exemplifies the kind of life he lived.

“These stories about my father are stories that I’ve collected over a lifetime,” Earle said. “There’ve been hundred and hundreds – thousands of people over the last 50 years that he’s been gone (who have shared their memories). I just had to write these true stories. It’s the stories behind the stories.”

Earle said the book is an ideal read for anyone who enjoys taking some time in the mornings or nights to read a few pages with their mug of tea or coffee. His hope was to capture the essence of Newfoundland of times gone by. Earle spoke warmly of the sense of community that could be found in nearly every corner of the province in the era of his father’s life – something that seems to be missing in the province of modern day, he added.

Some of the stories focus on the adventurous side of Guy Earle’s life – the “daring, harem scarem, rumwater” side of his father’s overseas career, Earle said. Behind them all, he hopes readers will be able to appreciate one important trait of Guy’s personality: determination.

“His motto was ‘You never know what you can do until you try,’” Earle said. “Look at Captain Guy and see how successful he was. The reason for that is because he believed in his dream and had an undaunted self-reliance. That is the key to success in the future. Unless you believe in your dream and give it your all, you’ll never know what you can do.”

As a child, Earle can remember his father pushing him to become better, and to do better. He has many a memory of playing games such as checkers against his father, or even just racing him across a field. He said this instilled in him a competitive spirit that has led him down a path of various successes as well.

“When I was a boy, I thought everyone’s father was Superman, until later in life I found out that, well, there’s just nobody else like (Guy),” Earle said. “I’ve never met someone quite like him. He’s been gone for 50 years now, and hundreds and hundreds of people have had so many stories to tell me. I don’t call myself a writer, but I felt like it was something that needed to be written.”

Earle has been busy holding book signings and from those who have read it, he’s heard nothing short of positive feedback, he added. He is confident that his book has managed to properly capture the life and personality of his father.

“When I was a child, I was very close and attached to my father. I was like a dog, I went everywhere with him,” Earle said. “He was always a positive influence in my life, and I feel honoured to be able to put that into words in (this book).”

‘I’ll go the length of meself’ is available at The Green Door Bookstore in Carbonear, as well as the Powell’s Supermarkets in Carbonear and Bay Roberts. You can reach Earle himself at earlephil@hotmail.com.

One thought on “A life boldly lived”