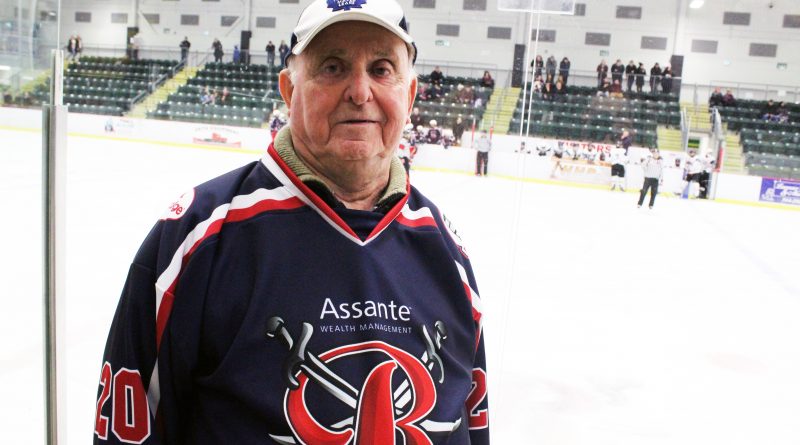 The 1960’s was a time a time of both turmoil and growth. It was the era of Woodstock, the anti-war movement, psychedelic rock, civil rights, and space exploration.

And it was in 1965 that Holy Spirit School principal Alice Connelly hired Peter Gladstone ‘Glad’ Duff to teach — and challenge him to organize sport for the youth in the community.

The result would eventually help lead to the formation of the Conception Bay South Minor Hockey Association in 1976, an event that would directly impact more generations of local hockey players than the moon landing or Woodstock ever could.

Duff, who taught in Conception Bay South schools for close on 40 years, was recognised as an Honourary CBR Renegade Saturday night, Feb. 15, a testament to his tireless commitment and impact on minor hockey in the area.

“It really is an honour to be remembered, if nothing else,” Duff admitted. “It was so much fun. Hockey was the best years of my life… I wouldn’t have missed a minute of it for anything.”

After being challenged by Connelly to organize a sports program, Duff arranged for local youth teams to travel to St. Bon’s Rink in St. John’s every weekend. The program quickly grew into the Holy Spirit School Minor Hockey Association, and expanded into the Prince of Wales Arena.

“When I started out in the 60’s, there was very little organized anything. So, it was important to get kids involved in stuff so that they had things that they could belong too. It became a hockey family. It got the community involved, it got the parents involved, and it got me involved, I tell you,” explained Duff.

The lessons that hockey teaches, said Duff, are as important today as they were in 1965.

“Any team sport, but hockey in particular, teaches you how to behave when you lose and how to act when you win,” said Duff. “Also, it’s important to know that you can’t do things on your own. You have to be part of a team. You have to learn to cooperate. There are so many other life lessons.

“And keeping kids occupied keeps them out of trouble,” he joked.

Standing in the multi-million dollar Conception Bay South Arena, just up the road from the Robert French Memorial Stadium, watching the current CBR Renegades play the CBN Stars (and, defeating them with a final score of 11-1 under coach John Baldwin, who Duff said was one of the first kids to play hockey for him), it would be an understatement to say that there have been some changes over the years.

“The equipment is probably one of the major things. Some of the rules are changed, but the equipment, I mean we had, basically old wooden sticks and most kids got the cheapest they could find because they couldn’t afford anything else. Now you want a week’s pay to buy a stick. And the skates are so much better. It’s incredible. Even a really good pair of skates back in the 60’s would be really crappy compared to what’s out there now,” said Duff.

“And of course, the facilities they play in, there’s no comparison. Even when we graduated from the old Prince of Wales Arena, which at that time was one of the better arenas in St. Johns, except for Memorial Stadium it was probably the best one out there, and that would not compare to a place like this, or the Paradise Double Ice Complex,” he said.

Duff himself grew up playing not in million-dollar stadiums, but on the ponds in Chamberlains.

“The equipment and the facilities are well beyond anything we could have imagined. But the game itself, really hasn’t changed that much,” he said. “If you play it with heart you’ll be successful.”

Apart from his involvement in minor hockey, Duff has also gifted the Town of Paradise with the Peter Barry Duff Memorial Park, in honour of his son Peter, himself a great hockey and softball athlete who tragically drowned in 1984 at the age of 17. Today that park includes two baseball fields, a soccer field, playground, trails, skate park, basketball court, and swimming areas.

Glad, who was also inducted into the CBS Sports Hall of Fame in the Builder category in 2018, is the eighth person to be named an Honourary Renegade, joining Ford Metcalfe, Scott Parsons, Bob Cole, Marg Noftle, Sandra Baggs, Sarah Davis, and Mel Strong.

Looking back over the years, Duff has another very fond memory from a bygone age; the Toronto Maple Leafs 1967 Stanley Cup win.

There’s no word on when that feat will be repeated.

2 thoughts on “‘It really is an honour’”