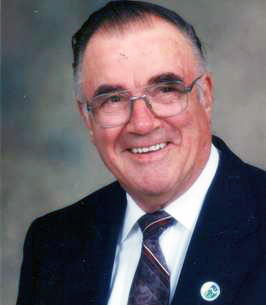 The Town of Conception Bay South lost one of its more colourful municipal leaders last week with the passing on September 5 of former mayor Aubrey Dawe at age 86.

Dawe served as a member of council in Conception Bay South throughout the 1970s and early 1980s as both Deputy Mayor, and Mayor. Dawe also sat on a number of municipal committees and many community groups, even spending 75-years with the St. Peter’s Anglican Church choir in Upper Gullies.

Dawe is being remembered by his friends and colleagues as someone who left a legacy of improving Conception Bay South, helping to make the former collection of nine individual communities into the town that people are familiar with today.

Former CBS Mayor Kelvin Fowler said Dawe was a loyal and dedicated person who had a passion for CBS. Fowler and Dawe served together on the town’s first council after its incorporation in 1973.

“Once he was committed to an organization, then he was a dedicated member from then on. His loyalty never wavered until a project was completed, whatever that project or organization might have been. That’s just how he was,” Fowler said.

It was after this term that Dawe was elected Mayor in 1985 – already with a decade of council under his belt.

“When a controversial topic was being discussed in council, he was a part of it, and we could rely on him to make some positive comments,” said Fowler. “When a matter was considered and discussed, and all the pros and cons were laid out, he was decisive. There was no wishy-washy, or wondering what we would do and what we wouldn’t do, he would always have a decision made, and remained level-headed. That was a good quality to have in his position.”

“He could gauge the moment, and have a humourous comment or sometimes tell a story, in order to ease the tension before getting back to a serious discussion,” Fowler said, adding that Dawe was a good go-to if one was in need of a good story to lighten a mood after a long, dreary meeting.

Because of his 75-year dedication to St. Peter’s Anglican church choir, Dawe was awarded with a certificate from the diocese of Newfoundland and Labrador. Fowler said that was only one example among many of how much Dawe was willing to put into anything he was involved in.

“That’s dedication and loyalty right there. No doubt about that,” Fowler said.

At the time of Dawe’s involvement with municipal government, the town council of CBS was in an embryo stage. Many side roads were still gravel and the need for water and sewer services was one of the most pressing issues facing council. Getting water and sewer lines topped Dawe’s to-do list, alongside sports facilities like a stadium, and even a library, all of which the town was lacking.

Although some of those amenities came after his time on council, Fowler said Dawe’s visionary mindset played a big role in setting those things in motion.

Current Mayor Terry French said growing up in CBS he was aware of Dawe and admired his work and dedication to the Town.

French said there is no mistaking the amount of respect Dawe accumulated over the years, and recalled how the former mayor exuded pride in his community every time they crossed paths.

“He certainly didn’t have an axe to grind,” said French. “Some people, when they take on this role, they end up leaving with bigger scars than they came in with, but I can honestly say that Aubrey was a very well-respected man. He just carried an air of respect about him, and that’s something you have to earn. People don’t give you that for no reason.”

French noted that even decades after Dawe completed his role on council, he was associated as a municipal leader.

“I would see him every so often out and about, in supermarkets and whatnot, and I’d always ask him if he wanted his old job back,” French said.

“He’d always have a very big chuckle at that… But, honestly, I don’t know any other word that I could use to describe him, other than respect.”

One thought on “Aubrey Dawe remembered for dedication to community, sense of fun”