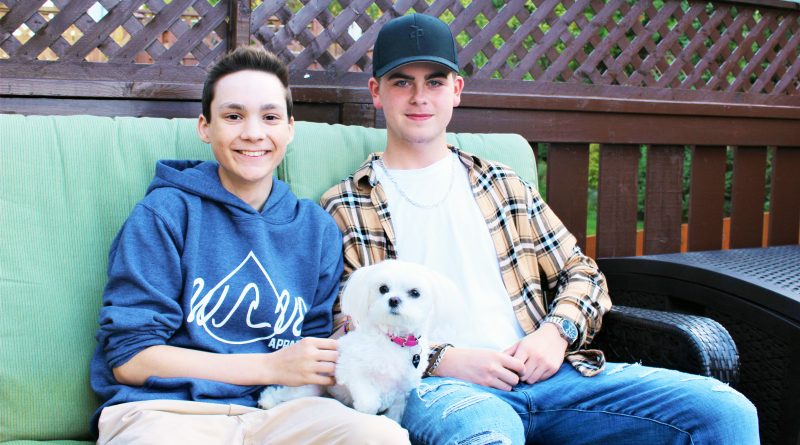 High school can be a tough time for any student. With the stress that comes with things like final exams and homework, as well as the social stresses stemming from day-to-day life in the hallways of a high school, students have a lot on their plate.

For Logan Millard and Aaron Rumbolt, two students at Holy Spirit High School in Manuels, those normal challenges had to be put on the back burner for a while last year as each young man struggled with cancer diagnoses.

Millard was diagnosed with stage four Berkins Lymphoma in January. Both of the boys are now 16, soon to be 17, and just recently started their final year of school at Holy Spirit. The two of them are even in the same home room class, but up until this past year, that was where the connection between them ended.

Rumbolt had been through the ropes of cancer treatments once by the time Millard was diagnosed, but had relapsed in November and found himself going through the process once again. It was at this time that the two were able to connect with each other in a way that not many others their age can – by helping one another deal with the physical, and emotional hardships that come hand-in-hand with cancer.

“I went through surgery and I think it was 28-days before I finally got out,” Millard said. “When I did get out, it was only four days before I was back in for another 14-days … I didn’t have very much luck when I was in there.”

It was around this time that he and Aaron met and got to know each other for the first time.

Despite being in the same home room, the two lived very different lives and had not interacted much. However, as they told The Shoreline, living with cancer can be one of the hardest struggles in one’s life, and having someone going through a similar situation was something of a game-changer for them.

“You hear so many horror stories about cancer, and chemo, and all of that.

So, to have someone like Aaron who’s been through it, well, it helped,” Millard said. “If I had a question, then nine chances out of 10, Aaron had an answer for me. It really helped set my mind at ease, at least I knew what was going to happen.”

Rumbolt, too, described the connection as comforting. Although he went through treatments the first time around without this type of support, he said that having Millard around when the disease reappeared was something he learned to appreciate.

“It helped me remember that I wasn’t the only one, you know?” Rumbolt said.

Rumbolt noted that while cancer is a debilitating disease for anyone, regardless of age, it presents a unique set of struggles when coupled with life in high school.

“You have your social routine at school, and then all of a sudden you’re taken out of it. Your whole world is put on hold, but for everyone else, the world keeps going … People are going to parties and other events and stuff, but you have to stay behind in the hospital. It really shows you who is there for you, and who really cares about you, what’s important and what’s not. It shows you what to stress about, and what you shouldn’t. Getting your phone taken away? Yeah, it sucks, but it’s so minor, and you don’t even realize,” he said.

Millard, who has spent many years of his life engrossed in minor hockey, feels similarly .

“I was on the ice, or playing rugby, or something, every single night. I went from that to laying in a hospital bed and not being able to get up and even go outside,” he said. “You see your friends doing all these things, and that’s it. You see it, but you don’t get to go. The sports part really was the biggest thing for me. The social part of it – I couldn’t hang out with my friends anymore and do the things we do. You get your life taken away from you in the blink of an eye, basically.”

That even applied to the post-treatment life. After undergoing so many surgeries, and chemotherapy, the boys’ bodies were more susceptible to illness than ever before. As a result, they still had to avoid germs and avoid many social situations. This meant that, even though they could leave the hospital, they were still unable to take part in many of the things they enjoyed.

For Millard specifically, this meant that he could not get involved in the annual Fred Squires Shield tournament, which has become a big event for those who play or follow high school hockey in Conception Bay South.

“It’s a big thing in high school hockey. I missed the first game, because I wasn’t allowed to leave. I basically begged them when the second game came around,” he said, explaining he had undergone two blood transfusions and taken enough medication to allow him to go out. Still, he had to take extra precautions to ensure he did not expose himself to anything that could do substantial harm. “There’s a bunch of pictures out there. Everyone else is in their gear and suits, and then I’m there with sweatpants and a hockey jacket, and a big blue mask … There was also a big party after that, but I was stuck laying in a hospital bed again.”

Despite the difficulties and social setbacks, Millard and Rumbolt had each other. The unique friendship they were able to cultivate during their dealings with Lymphoma helped ease the burdens the disease had created.

Being able to compare experiences with one another, and the constant reassurance that they were not alone in their plight, were some of the reasons why Millard and Rumbolt were able to help each other cope with their respective diagnoses.

Millard allowed that had he gone through cancer on his own, it would have taken a much harder toll on him mentally. With Rumbolt around, he said the process was easier. This is something that resonates with Rumbolt too.

“Going through cancer treatments are not just painful. There’s a lot of embarrassing stuff that happens too,” Rumbolt said. “Your body just doesn’t work as well as it should, and everything starts going wrong, which makes you feel almost weak. But, knowing it’s not just you, that makes it feel a lot better in a way.”