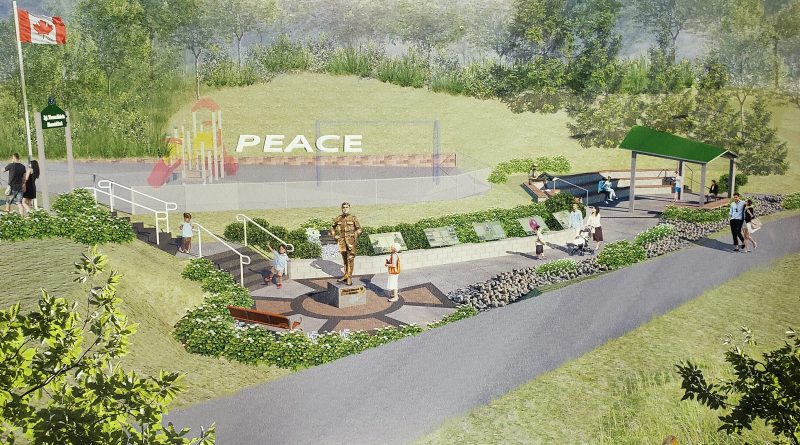 Development of the Sgt. Thomas Ricketts Memorial Peace Park on the Kiwanis grounds in Kelligrews is entering another phase.

The park is named for the Newfoundland war hero, who enlisted in 1916, when he was only 15-years-old. His efforts two years later, in a battle outside the Belgian village of Drie-Masten, earned him a Victoria Cross. Ricketts didn’t walk much about his war experiences. He kept a summer place in Kelligrews, located on what is now the Kiwanis grounds, land he donated to the club in 1956, in the hope it would be used to better the lot of young people in the area.

Today, that land is being used the way Ricketts had envisioned. It features a playground and a ball field, as well as a building that’s seen plenty of use for community events.

Clem Drake, co-chairman of the Peace Park development committee and a past president of the CBS Kiwanis Club, explained the project is being pursued in four phases.

Phase one covered upgrades to the Kiwanis Club building.

“We just completed phase two. It was mostly renovations to upgrade our facilities – our baseball diamond. That meets the policy standards of Baseball Newfoundland, so we can now host provincial play on that field,” Drake explained. “We’ve also got a picnic area for families to get together. We’ve got new flags, and transferred a memorial to the area where we’ve got the flag poles, out by the road, so it’s a lot easier to see.”

There are also plans to give the playground an upgrade as a part of phase two, to make it inclusive for children with mobility challenges. Drake said the only work left to do is to install some rubber mats. After that, phase two will be officially completed as well.

Now, the committee is into phase three. To help, the club and development committee hired Mills & Wright Landscape Architecture.

Drake hopes to see story boards erected that tell the story of Ricketts’ life. Beneath that would be an image of the Victoria Cross laid out in stone, which Drake explained served a very specific purpose.

“(The cross) is down below the level of the walkway, and everything else. That’s down below all these things for one reason – it represents the trenches of Beaumont-Hamel. That’s why it’s designed that way.”

Perhaps one of the biggest undertakings for the entire project is the construction of an amphitheater and stage. It’s main purpose will be to help educate school-aged children, Drake said.

The ampitheater, complete with a stonework finish, will be able to house upwards of 80-100 people.

“We have an educational component going into that,” Drake said. “We’ve got the Royal Newfoundland Regiment, The Rooms, and (a representative from the Royal Canadian Legion) who are going to put together a curriculum, as some classroom training. It’ll teach about World War I and World War II, and it’ll teach about the importance of peace in the world. It’ll emphasize the importance of both civil life, but also military life.”

The final portion of phase three is a bronze statue. It will stand at seven-and-a-half-feet tall and portray Ricketts as a 15-year-old boy, dressed in the Newfoundland Regiment uniform from World War I.

However, in order to see all these things come to fruition, Drake said the committee is in need of funding.

Phase four is not yet underway, and Drake said that it may not begin until sometime in 2020 at the earliest. The plans for phase four include a stone entranceway, as well as an electronic scoreboard.

“The support for this would come from the federal government, provincial government, municipal government, corporations and organizations, as well as the general public,” Drake ventured. “We don’t have it all lined up yet, but we’re working on it.”

Drake noted that anyone looking to donate can reach out to the Kiwanis Club in Kelligrews. The ultimate goal is to have the entire project finished by the end of 2020, and the committee is hoping to see the majority of phase three out of the way by next year. This, however, relies on how quickly they are able to secure the funding.