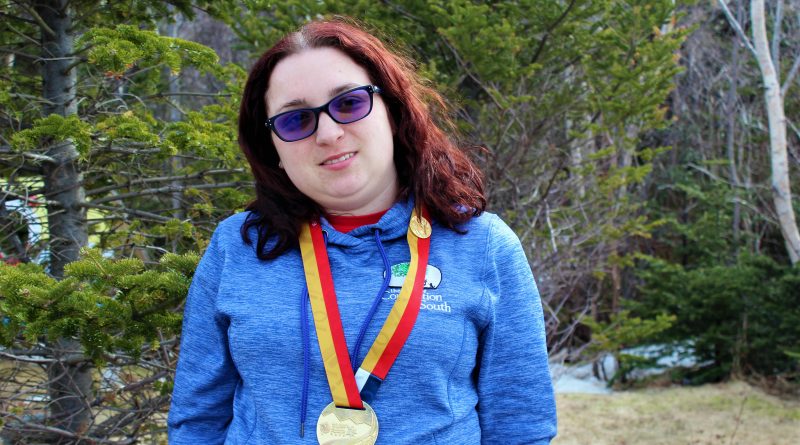 Melanie Taylor is proud to have brought the gold home to CBS.

She collected the precious metal, in the form of a medal, at the 2019 Special Olympics Winter Games, which took place in Red Deer, Alberta earlier this year. The event saw athletes from across the country gather to showcase their skills in eight different sports, including five-pin bowling, alpine skiing, cross-country skiing, curling, speed skating, floor hockey, snowshoeing, and figure skating.

The latter of those sports is where Taylor shines. She has been involved in Special Olympics for some 15 years. Now, at 30-years-old, Taylor has reached the maximum age for participants in the event, and this year’s performance was the perfect way to cap her involvement in the event.

When asked what originally got her involved in figure skating, and kept her interest going, Taylor described the freeing feeling of gliding across the ice – something she wanted to try after seeing figure skaters on television.
Throughout her life, Taylor took part in various skating programs and events, such as CanSkate in Mount Pearl, as well as some competitive skating programs that she was a part of whilst living in New Brunswick.

It was when Taylor and her family moved back home to Conception Bay South in her teen years when she got involved in Special Olympics.
“I can’t really pick one thing that I find the most exciting about figure skating, because I really do love it all. I wouldn’t know what to say if someone asked me to pick something that I didn’t like about it,” she said. “I love doing the jumps and the spins. I guess the dizziness from spinning so much isn’t that great. But other than that, I pretty much love everything about it.”

Taylor listed Marystown native, and world champion figure skater, Kaetlyn Osmond as one of her biggest influences. It’s this admiration for Osmond’s on-ice presence that pushed Taylor to keep up with her passion for figure skating, ultimately leading to her participation in national level events such as this year’s Winter Games.

However, it was Taylor’s own dedication to the sport that landed her first gold medal in Red Deer – a moment she won’t soon forget.

“It feels so good. At first, it felt weird honestly. I couldn’t believe I had actually done it,” she said. “Everyone was always telling me that I needed to be prepared because the judges were going to be way harder than they are at provincials, or any other competition, so I went into it thinking that as long as I participated, and did the best that I could do, then that was all I needed. I just wanted to do my best. I didn’t think I was going to get gold, or even bronze. I just wanted the experience of being there, but when I ended up with a gold medal it was like, ‘Whoa, I actually managed to do it. Is everyone else seeing this? Is this a dream?’”

Still, it wasn’t the medal alone that made the Winter Games experience such an exciting time for Taylor. Being present to watch all the other events, and being able to cheer on her friends in other sports like hockey, was all a part of what made this year’s Games so special.

“The only downside to it all, that I can think of, was how unbelievably cold it was there,” Taylor joked. “Colder than here, for sure. It was like -40 out there one day.”

One of the most memorable experiences was when Taylor was given the opportunity to carry the Newfoundland flag during the closing ceremonies. This, she said, also came as something of a shock, but something she was very proud to carry out.

“There was a lot going through my mind – what if someone goes to give me a high five or something while I’m carrying the flag? I don’t want to drop it,” Taylor said, laughing. “Not dropping the flag was at the top of my mind the whole time, pretty much. ‘Just don’t drop that flag.’ But it was so exciting, I’m so happy to be able to do it.

Taylor admitted that bringing home a gold medal was a major achievement for her as a figure skater. One week into the event, no one from Newfoundland had landed any gold medals, so it was a goal of Taylor’s to score one for her home province, all while not putting too much pressure on herself or her teammates.

“I was saying to the girls, and everyone from Newfoundland, ‘Let’s go home with a medal, we got this,’ and now, here we go, we got to bring a medal home.”