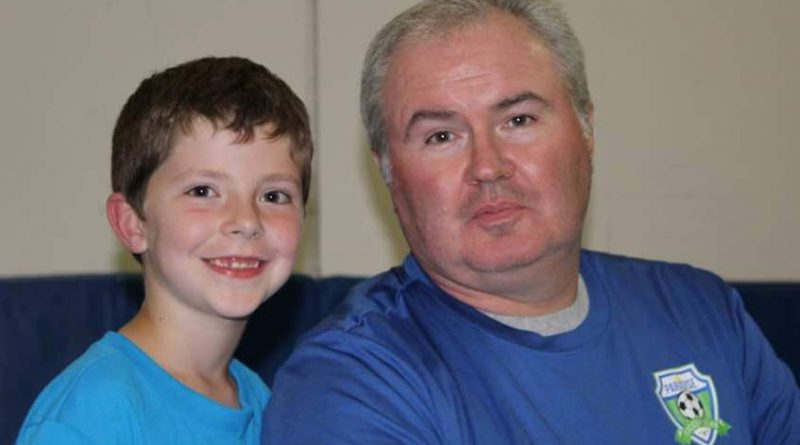 The long-term benefits of volunteerism is what keeps one of the Paradise Soccer Club’s longstanding volunteers going.

The Paradise Soccer Club runs on the energy and commitment of its volunteers. Without the dedicated work they put into the club, it would not be where it is today. Volunteers like Mike Taylor act as the backbone of such organizations and Taylor says he is proud of the work he puts into his many volunteering endeavours.

Taylor has been involved with the Paradise Soccer Club for the last eight years. At first, he coached his oldest son’s under-8 team, up until a certain point where coaching required the completion of a specific course and more credentials. At that point, Taylor decided to hang up his coach’s whistle and take on other jobs in the club.

“In 2014, three years into coaching, I joined the board. Originally, it was a sponsorship role, but eventually I moved on to communications,” Taylor said. “I have an IT background, so the computer side of it came pretty easy to me. I did that for two years, and over time the registration process moved to an online format, so I found myself handling that side of it as well. Now, I’m director of communications and registration. I’m the main online presence, I suppose, for the association. I look after the website, Facebook, Twitter, Instagram, so my phone is always dinging,” Taylor joked.

Taylor’s youngest son recently followed his older brother into a pair of soccer cleats as well. When it was discovered that the under-eight team was in need of a new manager, Taylor stepped in to fill that role too. This is something he’s continued to do now for the last two years.

Taylor credits his children’s interest in the sport as the reason for his continuing involvement.

“I had played soccer, basically, on a high school level and a men’s rec league level, but I was more of a hockey guy growing up,” Taylor said. “My son really took to soccer, though. When he got to that age group, there were no coaches available at the time. I had a bit of knowledge about soccer – a bit more than most of the other parents, at least – I understood the rules of the game and all that. So, basically, I was the last person standing when they asked for a volunteer. I said ‘Yes,’ and haven’t looked back since.”

Taylor said at the time, he feared that if he refused the position, there would be no soccer available to the children. This was something he hoped to prevent, noting the importance of sports activities and the like to children as they grow older.

“It was my first coaching experience, in that capacity. It was definitely a bit of a learning curve. I started out with six and seven-year-olds, and by the time I stopped coaching it was 12 and 13, so it was a big range,” he said.
As for what’s kept Taylor going over the years, he said it’s the simple act of helping others.

“I really enjoy getting something to completion for somebody, like, for example, on the website,” he said. “If someone’s trying to register and they can’t do it, they’ll reach out to me and I’ll guide them along, step by step to get them through it. To get that thanks from them, that’s what makes it all worthwhile at the end of the day. Our soccer association is really growing in the community, and really getting recognized now in the metro area as one of the larger, more organized groups. I like to think I’ve had a part in helping that along, and helping Paradise grow.”