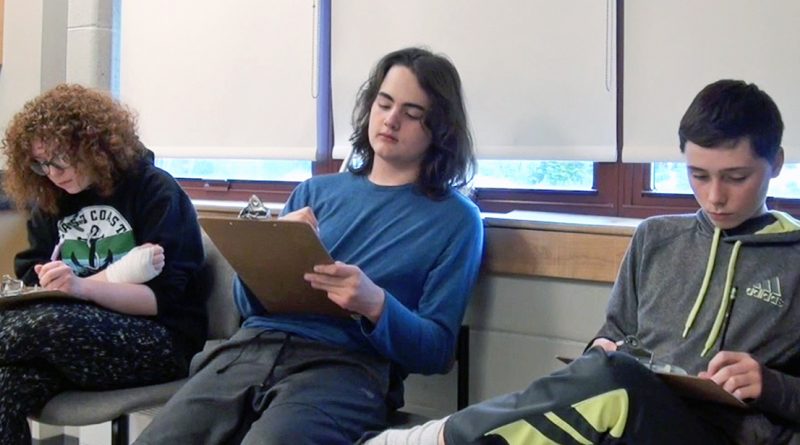 A group of Villanova Junior High students are spreading their workplace health and safety message with Newfoundland and Labrador and the rest of Canada after placing top of the pack in the WorkplaceNL 2018 Student Safety Video-Radio Ad Contest.

The Villanova media production team won the contest for the second year running, and made for the third official win for the school after taking home the prize in 2014.

According to Craig Follett, the Villanova music teacher who sponsors the group of 10 students, the video was an effort in teamwork and ingenuity from the students.

“It was a really collaborative effort,” said Follett. “A lot of them were involved with the same project last year so we had to come up with something new. We came up with a concept of young people not wanting to rock the boat.”

The video highlighted three young workers, all injured on the job after feeling apprehensive about approaching their boss to express concerns about potential safety hazards. The motto created by the Villanova students, and aired at the end of the video is, “Speak up at work so you don’t get hurt.” The annual video and radio ad contest is sponsored by WorkplaceNL to encourage students to share their thoughts on workplace safety and injury prevention.

“They’re pretty creative,” Follett said of the Villanova crew. “It was just something that we came up with that young people would come up with on the job.”

As part of the prize, the students received $100 each. As well, the school received $1,000 to further fund the successful Villanova media production program. Follett noted the students worked on the video for months, meeting weekly in their effort to bring home the cash prize for the second year.

“They were pretty excited, especially the ones who won last year as well,” said Follett, who noted that with over 60 entries submitted every year, winning the contest two years running is a tremendous accomplishment.

The school has organized a media production team for some six years according to Follett, who said that the media production group began as a small news crew inside of the school. Now, the group produces short videos for school events, as well as anti-bullying videos for awareness initiatives such as the Pink Shirt day held annually to raise awareness and combat bullying inside of schools.

With the provincial win, the Villanova student’s video ad will be entered in the Canadian Centre for Occupational Health and Safety national competition. And while Follett said his group was happy to have their video submitted as part of the national competition, the excitement from their last win hasn’t quite worn off yet.

“I don’t know how much attention they’ve paid to (the national competition),” said Follett, laughing. “When you talk about thirteen year olds putting $100 or $200 in their pocket, it is like winning the lottery.”
kyle@theshoreline.ca