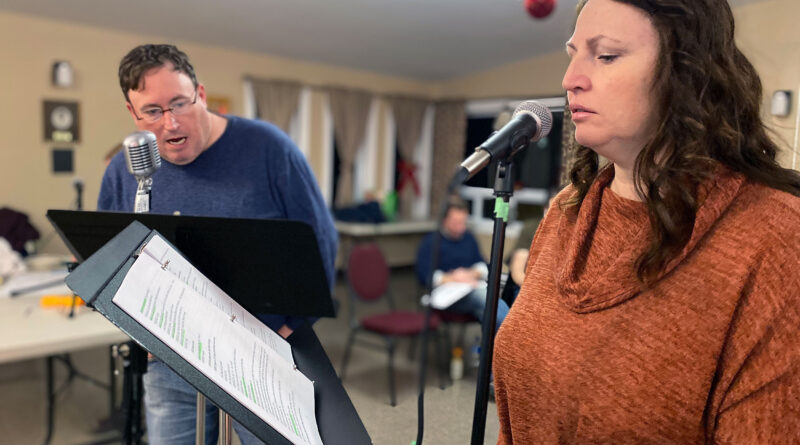 Theatre CBS is presenting the familiar story of Ebenezer Scrooge, the miserly, miserable, misanthrope scared straight by a trio of supernatural entities just in time for the holidays, as a live radio drama.

“It’s as if you walked into a 1940’s radio studio and you’re watching these actors come to work to perform this show,” explained director Gord Billard. “We have 13 actors, one sound effects person, and a piano player – and they’re playing about 48 roles. Many actors have as many as two or three characters that they’re playing to upwards of five or six. So, they have to rely on voice characterization.”

Two of those actors are husband and wife duo Matt Christian and Brenda Hynes.

Hynes has been performing for years, both on the stage and as a background actor in numerous local television productions and played a lead role in Theatre CBS’s production of Agatha Christie’s The Hollow last spring, while Christian will make his debut in A Christmas Carol, a story that he holds near and dear.

“A Christmas Carol, quite frankly, is the only story I might have thrown my hat into the ring for,” said Christian. “I have an affinity for it. Growing up, watching it was a tradition. If there was one movie I was going to watch at Christmas time, it would be A Christmas Carol. So, I said to Brenda, ‘Are you going to audition?’ and she said ‘Yeah, I think I’m going to,’ and I said, ‘Well, maybe I will too.’”

Christian auditioned and expected to be cast in a minor role at best, but managed to land the role of Scrooge himself.

Christian said while that came as a shock, his wife wasn’t surprised in the least.

“I knew he would get Scrooge. He’s very good with voices,” said Hynes. “And I’ve seen this regularly since our kids have been born, because he reads to them and carries on, and he does different voices, and he’s quite good at it. In fact, the whole time I was practising for ‘The Hollow,’ he used to read the script with me, and it didn’t matter who the character was opposite to me, he would do a voice for them. So, you can imagine that was quite entertaining.”

While Christian says his stage career will likely be a ‘one-and-done’ kind of deal, (“But isn’t it fun that we get to do this together,” he added. “It’ll be a wonderful memory for us.”) Hynes, who is playing the Ghost of Christmas Past and two minor narration roles, hopes to be involved with Theatre CBS as much as possible moving forward.

“I think I’m a bit of an awkward person, but when I get on a stage, I truly feel like all of that goes away and I feel like I’m someone else,” said Hynes. “I’m not me, I’m not ‘Awkward Brenda.’ I truly get lost in that world, in that story. It’s wonderful. And it’s the satisfaction of it too, because plays take a lot of work to complete… You go through a wide range of emotions, and then somehow at the end, everything always comes together. And everyone is part of it, it’s not just you. There’s a real sense of camaraderie, and a real satisfaction that your group has put this together and have given people a night of entertainment, a night out of the house.”

Charles Dickens’ A Christmas Carol, first published in 1843, has been adapted for stage, film, radio, and television countless times.

“I think the themes of A Christmas Carol are universal,” said Billard, the man tasked with bringing the drama to life. “We’re talking about charity, transformation, redemption. All these themes are universal, and they’re still relevant to modern society. I mean, the poor are always with us, and people are always in need of charity. It was 179 years ago that this was first published, and it hasn’t been out of print since.”

Last year, the company presented It’s a Wonderful Life as a radio drama.

“The biggest challenge is making it visually appealing for the audience,” said Billard. “It’s a radio play, but we want to avoid the idea that you can come in and close your eyes.”

Billard noted the cast is a mix of experienced actors and newcomers, hailing from CBS, St. John’s, Mount Pearl, Paradise, Holyrood and the Southern Shore. The youngest member is 12, while the eldest is a senior citizen.

Each actor has to find unique voices for their characters.

“They’re doing a great job with their voice characterizations,” said Billard “It’s a unique experience, in that it’s not your standard stage play. And I think people will enjoy it, because it’s not like something you see every time you go to the theatre… The other component that I think is interesting is that we’ll have live sound effects. So, when Jacob Marley visits Scrooge, for example, we have our sound effects artist at a table with chains that will complement Marley’s dialogue and actions.”

For folks like Christian, the play presents an opportunity to live a classic story for the entertainment of an audience.

“It’s a pretty small novel — especially as far as Dickens goes,” said Christian, adding that Scrooge’s redemption and betterment is what each of us seeks for ourselves. “But it’s a story that always stuck with me.”

The play runs December 8 thru the 10th at Worsley Park. Tickets can be purchased on the Theatre CBS website.